Exodus from Iraq: our broken Passover of 1950 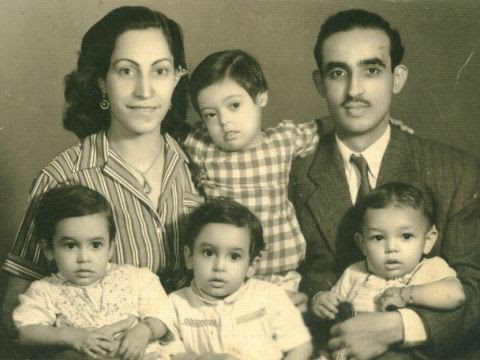 The Hakkak family shortly before their exodus from Iraq

Passover will always have profound associations for the poet Balfour Hakkak (Zionist parents were known to name their children after Lord Balfour or Theodor Herzl). The day after Seder night in 1950, the Hakkak family smuggled themselves out of Iraq for good. The family found shelter in the Beheshteh cemetery in Tehran on their way to Israel. The original Hebrew poem appears in Ynet News:

On Passover in 1950, my father
Broke the matzah*
Recited Shehehiyanu**
And entered a broken world

Immediately after the Passover Seder
The Seder*** was clearly broken up
And Father fled with his wife and children
In a convoy travelling from Baghdad to Iran
They found shelter
In a cemetery
Called the Garden of Eden.

In tents in a transit camp
They gave us Israeli food
We ate hot soup and dry bread
Dreaming of the day we could indulge
In Viennese strudel
Sweet chocolate
As in the films which came to us
From faraway Europe.

Once we left for Luna Park
On the ferris wheel singing Jewish Agency songs
And when we left the transit camp
We wove in the sounds of the oud
We ate the cake of the heart of the East
With espresso coffee of the West
And for the record I remember
That the cake we ate
was broken.

*unleavened bread of Passover
**special blessing praising God for allowing us to reach this season
***Seder refers to the ritual meal of Passover, but also means 'order'

Beautiful family picture. The Down child too is so beautiful. May all Jews enjoy the festival of Redemption in Jerusalem this year, 5771!

This blog is amazing. I am learning so much! Thank you for your blog.