The cuisine of the Jews of Bukhara 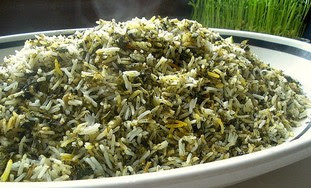 Photo: turmericsaffron.blogspot.com
Another Jerusalem Post column from Dennis Wasko to titilate the tastebuds - redolent of the aromatic and sophisticated cuisine of the Bukharian Jews:

There is tradition that Bukharian Jews are the descendants of the Tribe of Naphtali and of the Tribe of Issachar and that they were exiled during the Assyrian conquest of Israel in 7th century B.C.E. The Bukharian Jews of Central Asia, today’s Uzbekistan and Tajikistan, were essentially cut off from the rest of the Jewish world for more than 2,500 years. They are considered one of the oldest ethnic groups of Central Asia and over the years have developed their own distinct Jewish culture. In the region of Bukhara (Uzbekistan), the largest concentrations were in Tashkent, Samarkand, Bukhara, and Khokand. In Tajikistan, they lived in the capital, Dushanbe. Throughout the years, Jews from other Eastern countries such as Iraq, Iran, Yemen, Syria, and Morocco migrated into Central Asia by way of the Silk Road, as did Jews who were exiled from Spain during the Spanish Inquisition; all these joined the Central Asian Jewish community and were later collectively known as Bukharian Jews.

The first written account of this Central Asian Jewish Community comes from the 4th century C.E. The Talmud relates the story of Rabbi Shmuel bar Bisna from the academy in Pumbeditha who traveled to the region now known as Turkmenistan and feared that the local wine and spirits produced there by the Jewish community were not kosher. There is also evidence of a Jewish presence from the 5th and 6th centuries C.E. found on ossuaries discovered in the mid 1950’s.

The Bukharian communities experienced both times of prosperity and persecution. The Arab conquest of Central Asia in the 8th century C.E. ushered in the period of Islamic domination. Jews and Christians were considered second class citizens (Dhimmis) and forced to pay the jizya tax in order to practice their religions freely. The 13th century C.E. brought the Mongol invasion which also negatively impacted the Jewish communities.

In the beginning of the 16th century C.E., the area was invaded and occupied by nomadic Uzbek tribes who established strict observance of Islamic Sharia Law. Confined to designated Jewish “quarters” (Ghettos), the Jews were denied basic human rights and many were forced to convert to Islam under pain of death. Under the fanatical Uzbeks, the Jews suffered considerable discrimination. They were forced to wear a distinctive black and yellow costume to distinguish them from Muslims. Since the Bukharian Jews were considered Dhimmis, they were slapped in the face by Muslims during the annual tax collection, as required by law.

In 1793, Rabbi Yosef Maimon, a Sephardic Jew from Morocco, and well known Kabbalist in Safed, traveled to Bukhara and found the local Jews living in deplorable conditions. Rabbi Maimon was disappointed to see so many Jews lacking basic knowledge and observance of their religious customs and Jewish law. He became their spiritual leader, attempting to educate and revive the Jewish community's observance and faith in Judaism. He changed their traditional Persian tradition to Sephardic Jewish tradition. Through Rabbi Maimon’s efforts and an influx of Jews from the Middle East, the Bukharian communities were saved from extinction.

In the middle of the 19th century, Bukharian Jews began to settle in the land of Israel. When Bukhara fell under Soviet control in 1917, persecutions of the Jewish community again reached staggering proportions. Throughout the 1920’s and 1930’s, thousands of Bukharian Jews fled to pre-state Israel. World War II and the Holocaust brought a lot of Ashkenazi Jewish refugees from the Soviet Union and Eastern Europe to Uzbekistan. Starting in 1972, one of the largest Bukharian Jewish emigrations in history occurred as the Jews of Uzbekistan and Tajikistan emigrated to Israel and the United States. In the late 1980s to the early 1990s, almost all of the remaining Bukharian Jews left Central Asia for the United States, Israel, Europe, or Australia in the last mass emigration of Bukharian Jews from their native lands.

My I know based on what are you assuming that