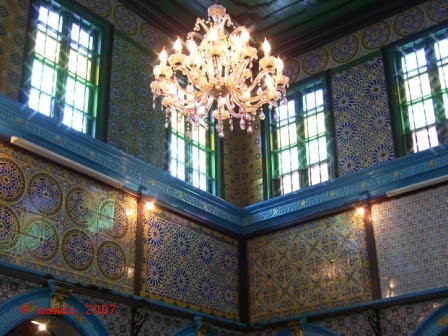 Inside the Ghriba synagogue on the island of Djerba

No wonder the Tunisian government is unhappy at Israel's offering a package of financial incentives to 'entice' emigrating Tunisian Jews: the Jews of Djerba are the island's main tourist attraction:

(AP) TUNIS, Tunisia — Tunisia's government on Monday condemned an effort by Israeli officials to entice Tunisian Jews to emigrate to Israel over concerns about possible economic hardship in the North African country.

The "ill-disposed" call from Israeli officials amounted to meddling in Tunisia's domestic affairs, an effort to sow suspicion, and "an attempt by Israel to tarnish the post-revolutionary image of Tunisia," wrote the Foreign Ministry in a statement.

Tunisia's tourism industry has suffered after a popular uprising drove President Zine El Abidine Ben Ali to flee in January. Roughly two-thirds of Tunisia's estimated 1,500 Jews live on the Mediterranean island of Djerba, a popular vacation getaway for sun-minded Europeans. Djerba's historic Ghriba synagogue was the target of a deadly terror attack in 2002 that left 21 people dead, including 14 German tourists, in the only major attack in Tunisia by Islamist extremists.

The Israeli government, in a statement, cited the economic situation and "the worsening of the Tunisian authorities' and society's attitude toward the Jewish community." It did not elaborate.

There is a time to talk and a time to shut up. Bibi tends to mix them up.

it is important for us Jews to know there is a safe haven for us in Israel.
A place where you can walk the streets without being spat at or insulted becuase you are Jewish.
Sultana Latifa: a Jewish refugee from Egypt.