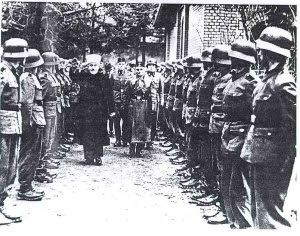 The Mufti of Jerusalem inspects a Bosnian Muslim SS divsion

This review of Professor Gilbert Achcar's book The Arabs and the Holocaust is an enlightening dissection by Seth Frantzman - just the sort of analysis that those attending his talk tonight at Jewish Book Week in London might find useful:

Gilbert Achcar, a professor who grew up in Beirut has attempted to write a treatise on the way in which Nazism was received in the Arab world before 1948 and how the Holocaust and the Nakba have been intertwined in the Arab world ever after. Burdened by deep bias and a schizophrenic desire to write two books at once, one on the Arabs’ relationship with Nazism and another on the Arab-Israeli “narratives”, the overall work suffers irreparable harm, leaving it with scant scholarly value.

Politics dogs the eloquent writing from the start.The author argues that “as a result of the Zionist enterprise and Jewish immigration to Palestine, the Arabs were deeply affected by the Holocaust.This seems to be an off-handed way of saying that the Arabs paid the price of the Nazi genocide, because of Israel’s creation.

It is not clear why the Nakba, what the Palestinians call the creation of Israel, gets intertwined by the author with the Holocaust, creating a grotesque pairing that is all too common.

Why does Achcar claim; “the use of the word holocaust to designate the Jewish genocide is eminently contestable and a subject of fierce controversy”? In the coffee houses near the School of Oriental and African Studies where he is a professor perhaps?

Why, in the introduction, is Zionism given such importance; “the ‘state of the Jews’ plainly owes its creation to the Holocaust, for more than one reason. ” All the semantics could have been passed over with the simple assertion, finally made, that “the reception [and understanding] of the Holocaust in the Arab East…[by the Arabs, has gotten] ever more complicated from the time of the Shoah itself to the time of the Nakba up to our own day.

”The first half of the book is devoted to the period before 1947 when the Arab reactions to Nazism cannot be confused with the Nakba.

These were “those best qualified to criticize the premises of Zionism while defending the values of Western anti-fascist culture.” Despite the fact that they didn’t appeal to the masses; “all things considered, the attitude of the Palestinian liberals was one of the most remarkable and commendable forms of opposition to Nazism in the world.”

But Achcar fails to show that they did almost anything to oppose Nazism, except that in an oped in Filastin one argued that “Palestine needs neither fascism nor Nazism in order to arouse the feelings of her sons against Zionism."

The author’s treatment of the Communist Arab parties is lacking, they were more nuanced than he gives them credit for. His one extended quote has the Egyptian Communist Anwar Kammil complaining that Zionism and Nazism were similar. What of Palestine’s Communist party which included Jews and Christian Arab communists, the latter of whom (Tawfik Toubi) became the youngest member of the first Knesset?

The author’s examination of the Arab nationalist’s reaction to Nazism is dominated by an obscure academic debate, whether Stefan Wild in 1985 explained the history the Arab support for Nazism correctly.

To Achcar he did not; Michel Aflaq, founder of the Baath party, was not influenced by Nazism; “nothing indicates that [he] had the least affinity for Nazism in his student days in France, unless one assumes that his purchase of a Nazi bestseller proves that he was fascinated by Nazi doctrine.” However the Syrian Social Nationalist Party run by Antun Saadeh was “an earlier admirer of Hitler.” The author notes that the Lebanese Phalange, founded by the Maronite Pierre Gemayel in 1936, was influenced by his admiration of Hitler but was modeled on Franco’s fascism, a known fact. Young Egypt, founded in 1933, also modeled itself on German and Italian fascism, and influenced Anwar Sadat who “never made any secret of his sympathy for the Germans in the war.”The writer thinks the evidence unclear regarding a youth movement in Iraq called Futuwwa which took part in a Hitler Youth parade in 1938. It was “one delegation among many.”

Achcar tends to turn those Arabs who were inclined towards Nazism into people with “ideological poverty and confusion” who “zigzagged”. Violent acts against Jews, like the Iraqi pogrom of 1941 are downplayed with claims that more Arabs died and quotes of others are cited that claim “only some 160-180 Jews [were] killed.

”The section on Islamic fundamentalism and anti-semitism examines such luminaries as Rashid Rida, Shakib Arslan (a Druze), who became pan-Islamists and a discussion of the Saudi-German relationship and the Jerusalem Mufti. Achcar informs us that the appointment of the Mufti was a sort of Jewish plot because Herbert Samuel,Commissioner of Palestine and a Jew, gave the Palestinians a “sower of discord, the first of an unbroken series of calamitous leaders.”This sentence and those like it such as “the Arab population of Palestine would doubtless have detested Hitler had it known the real content of his doctrine”, degrade the work, to the point where its academic pretensions suffer.

The author is full of rage and hatred for his scholarly adversaries who are subjected to unrelenting abuse. He accuses one author, Matthias Kuntzel, of creating a book based on “a fantasy based-narrative pasted together secondary sources and third-hand reports.” Two other Authors, David Dalin and John Rothmann, are said to have an odd “mental universe” who compiled a book full of “clichés of anti-Palestinian and anti-Arab propaganda.” Is Arabs and the Holocaust much more?

A long rant in the conclusion culminates in asking; “how is it possible to deny the racist nature of Israeli society?

"What does this have to do with The Arabs and the Holocaust? The same can be asked of much of the tragic work.

Gilbert Achcar: neither scholarly not moderate