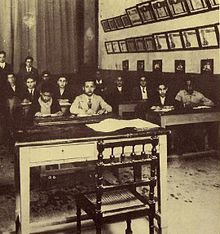 Buried in the news reports of the fighting in Libya, I came across this nugget by Mitch Potter in The Star (Canada). Potter stumbled upon an anti-Gaddafi doctor with fond memories of Benghazi's Jewish community. Unfortunately, Dr Mabroka Legnain is an exception in the antisemitic swamp that judenrein Libya is now:

But away from the front lines, a fuller representation of society rallied to the cause. In Benghazi, for example, the run-up to the fateful UN decision on a no-fly zone was preceded by three days of thousands of women rallying en masse, all pleading for the world’s help. It was unprecedented — never before had Libyans seen more than a handful of women gathered together in public, let alone thousands.

Among them was Dr. Mabroka Legnain, 62, a Libyan pioneer for equal rights. She once held one of the highest medical offices in the country as overseer of Benghazi’s 600-bed Jamahiriya Hospital. But a few years ago, Gadhafi’s secret police imprisoned one of her sons-in-law — his only offence was that he wore a beard, and was therefore deemed suspicious. As part of a subsequent witch hunt, Legnain was forced to resign her position.

“Even if you swallowed all of Gadhafi’s injustices, they could see it in your face,” Legnain told the Star.

“Now that this volcano that has erupted, we can never go back. We have no faith in this regime, but we have faith in God, and in ourselves. We will create a new Libya for our children from the ashes of these 42 years.”

Throughout Benghazi, anti-Gadhafi graffiti abounds. And in some instances, one see Stars of David entwined in the spray-paint tags, suggesting anti-Israeli or perhaps anti-Semitic impulses within the war on Gadhafi.

Legnain told a different story, however. She is old enough to remember when Benghazi had a sizeable Jewish community, with which her own family was closely entwined. On the Jewish Sabbath, she and her sisters would light hearths and switch lights on and off for their Jewish neighbours. Moreover, said Legnain, she and her siblings were reared by a Jewish wet-nurse — “which to us means we weren’t just friends, but family.