No more marriages or barmitzvahs for Syria's Jews 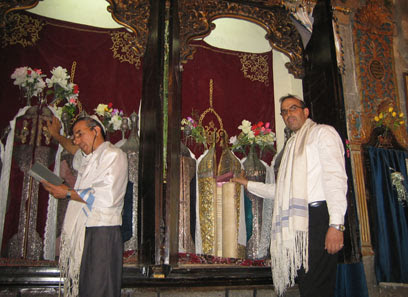 Yom Kippur at a Damascus synagogue

The school is empty, there are no more marriages or barmitzvahs: the future for the remaining Jews of Syria could not be bleaker, Spencer Barnett writes in The Jewish Chronicle:

What could the leader of the Jewish community in a country whose ruling Ba’ath party has long promoted the conspiracy-feeding Protocols of the Elders of Zion possibly say about his the likelihood of his government falling to a revolution?

The President of the Syrian Jewish community, Albert Cameo, tells me: “Ah politics, I am happy to talk about the community here but politics I don’t know.”

Over the following decades, political and economic strangulation caused most of the country’s Jews to leave, mostly to the USA and Israel.

Mr Cameo runs a school behind padlocked doors in the old quarter of Damascus, next to the derelict looking Al Raqi Synagogue and down a dark, cobbled street.

But the place is empty: where were the students? “There are no classes now but when they come we have just 300, and these are made up of mainly Muslims and Christians and just a few Jews. We have only between 150 and 200 Jews left in Damascus. They have all left over the years. The youngest in the community today is 40, all the young have gone.” Mr Cameo lives with his sisters, Rachel and Bella, in the same house as none are married.

Despite his gloomy situation, Mr Cameo appears remarkably upbeat. He says: “We get kosher food from a butcher here and also have it flown in from Istanbul. At home we make our own kosher wine.”

For the main festivals of Rosh Hashanah, Yom Kippur and Pesach, a rabbi has visited from Turkey. Otherwise, Mr Cameo conducts the services himself. He told me that since 2000 there have been no barmitzvahs or weddings as there are Jews left to marry. I asked: what it will be like in 20 years? Mr Cameo shrugged. “There will only be a handful left, if any at all.” With hatred and intolerance so entrenched in the national psyche, that is a realistic assumption.