In Morocco we trust - Jewish leader 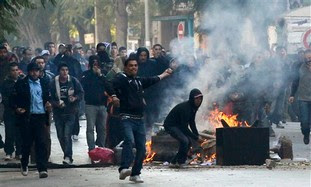 There is no reason for Jews in Morocco and Tunisia to fear that they are in danger as a result of the current unrest, say local Jewish leaders.

The president of the Jewish Community of Marrakech-Essaouira, Jacky Kadoch, has insisted that there is no reason for the Jewish community to fear the unrest in the country.

Over 37,000 people protested across the country this week, calling for "the overthrow of autocracy" and ransacking government buildings, banks and commercial centres.

Despite the upheaval, Mr Kadoch said: "The situation is stable… The King is listening, and has reform projects on his desk, ready to be implemented. As loyal citizens of the King, we Jews have every confidence in him."

Mr Kadoch said that the country's shuls remain open and "no damage has been done to any of our property".

However, antisemitic slogans have been shouted in Essaouira against Andre Azoulay, the Jewish economic adviser to the King. "It was at his suggestion that our community handed over our Talmud Torah building to the municipality for the use of underprivileged youth; yet antisemites have seized the opportunity afforded by the demonstrations to speak out against him. We Jews are not worried by the unrest, but we need to remain vigilant."

At around 5,000-strong, the Jewish community in Morocco, is, in general, the happiest of any in the Arab world.

Tunisian leader denies synagogue arson: the Tunisian Jewish leader, Roger Bismuth, has said that concerns for the community exist but should not be exaggerated. He said that reports that synagogues had been burned were not true; he suspected regime loyalists for spreading those rumours. [Bismuth is now contradicting what he told The Jerusalem Post : he admitted that arson had taken place but denied it was an antisemitic incident (with thanks: Victor).]

Email ThisBlogThis!Share to TwitterShare to FacebookShare to Pinterest
Labels: Jews of Morocco, Jews of Tunisia