The curious case of Aunt Rina 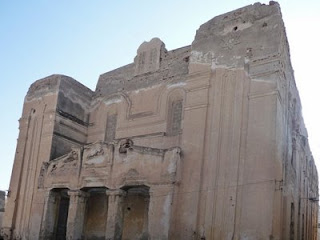 The great synagogue, Tripoli (Photo: Laurence Ben-Nathan)
Libyan-born author and psychologist David Gerbi is apparently a celebrity in South Africa. Now that Libya is in the news he tells the (South African) Times blogger Jackie May the bizarre story of his aunt Rina, one of the country's last Jews:
His family, along with 5000 Jews, left Libya in 1967. They were told to leave. “You are not safe here anymore,” King Idris said.

Gerbi’s family split. Gerbi, his mother and sister left to live in Rome, and his father and other siblings went to Israel where they planned to stay forever. His mother, on the other, was hoping to return to Libya once it was safe to do so. But in 1969 when Gadaffi came into power he declared that Jews couldn’t come back and he confiscated all the possessions left behind by the exiled families.

But, one Jew hadn’t left in 1967. Many years later Gerbi, applying for a new passport for his mother, had to contact Libyan officials for her birth certificate. He was asked if he new somebody by the name DEBACH Rina.

DEBACH Rina was his aunt, and had been living alone in Tripoli in her family house since 1967. It was only when she became old and sick, and was sent to a hospice that her identity was discovered.

The aunt, it turned out, wouldn’t leave Tripoli because she was protecting the family’s wealth. It was stored in the cellars of the house. Piles, and piles of accumulated gold and silver, says Gerbi.
Libyan security officials, when she refused to stay in the hospice and became anxious about her house (there is something I need to guard, she apparently said), searched her home, found the money, and of course confiscated it.
Gerbi applied for a visa to visit Libya, and was the first Jew to get one and to visit Libya since the 1967 exile. He went to fetch the last Jew living there, brought her back to his home in Rome where she died in 2003.
He has since been back to try and restore the synagogue in Tripoli.

Email ThisBlogThis!Share to TwitterShare to FacebookShare to Pinterest
Labels: Jews of Libya, Testimonies

Has anyone done a study on what happens to kingdoms/countries when they expel their jews? King Idris was deposed in 1969. Look what happened to the Spanish (syphilis) the Tsar, the nazis, the soviet union. Sadly now the UK seems to be following suit.

I think it is obvious that countries who expel their Jews go into decline. It;s nowhere more apparent than the Arab countries, where the Jews were the backbone of the civil service and merchant class, to say nothing of their contribution to culture.

concerns what anonymous said:
but i do not understand her:his sentence concerning the UK. ARe they too kicking out their Jews?
Can anyone enlighten me?
suzy Vidal aka sultana latifa

No, the UK is not, although some Jews have been buying boltholes in Israel, just in case!