Arabs and Jews meet in memory of Basri the genius 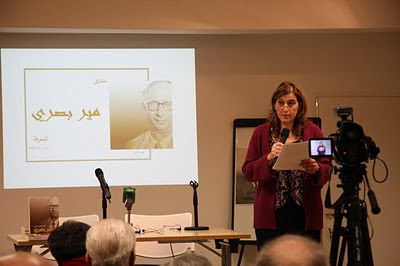 Niran Timan delivers her welcome speech at the new forum

Writer, poet, polymath, civil servant, historian - the late Meir Basri excelled in many fields, and would have been appointed as Iraq's second Jewish finance minister in 1948 had the first Arab-Israeli war not broken out. In his memory, Arabs and Jews of Iraq are building bridges.

The publication of a biography of the late Meir Basri in Baghdad has prompted a number of Jewish and Muslim Iraqis to initiate a cultural forum called the 'Meir Basri Forum for Knowledge'. The forum organised a book launch after receiving copies from Baghdad. The evening was held in Arabic and was attended by around 80 Iraqis - Jews, Muslims and Kurds.

The event took place at Salam House in London and was sponsored by the Humanitarian Dialogue Foundation – a charity founded by Sayyid Hussein Ismael al-Sadr who holds a unique position amongst notable Iraqi scholars, and has used his influence to try to promote dialogue, understanding and respect between all Iraq's people. Al-Sadr worked with the late Pope Jean Paul II as well as the Archbishop of Canterbury's special envoy to the Middle East, Canon Andrew White.

The book is in fact a Master's degree thesis from Baghdad University by Faten Muhyee Muhsen. It was published by Mazin Latif of Mesopotamia Publications in Baghdad. In her welcome speech, Niran Timan explained the reasons behind the initiative for the forum: “This initiative is long due to a genius who excelled in so many fields including Literature, Poetry, History and Finance. The forum's events will create a platform to bring Iraqi expatriates in London together”.

The initiative was welcomed by Iraqi writers, poets and historians both from within and outside Iraq. Prof Shmuel Moreh of the Hebrew University in Jerusalem sent a message. Dr Jabbar Jamaludeen from Kufa University in Iraq sent a poem he wrote specifically for the opening evening.

The well-known Iraqi writer and historian Dr Rashid Khayoun talked about his high regard for Miss Muhsen who was born nearly 10 years after Mr Basri’s departure from Iraq. Rashid Khayoun used to visit Basri in London. An esteemed writer, author, poet and authority on the history of Iraq, Meir Basri's work is considered a great source of reference to this day. Khayoun touched on the subject of the Jews of Iraq and the injustice they faced.

Dia Kashi, who knew the late Meir Basri on a personal level for the last 15 years of Basri's life, spoke of Basri's humanitarian side and about the tragedy of the Jews of Iraq who, despite been very loyal to Iraq, were accused of being the opposite. Members of the audience shared some of their memories of Meir Basri. Others took the opportunity to talk very fondly about the Jews of Iraq in general.

The next forum will take place in May.
Posted by bataween at Friday, March 04, 2011