The danger of distortions to the Holocaust message 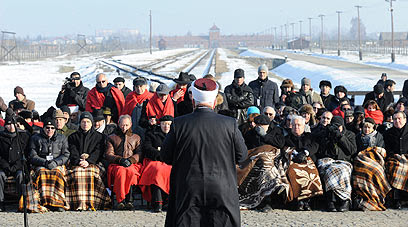 Visitors huddle together for warmth at Auschwitz

Muslims were amongst 150 interfaith visitors to Auschwitz death camp this week in the depths of the freezing Polish winter. All credit to the Aladdin Project, which aims to combat Holocaust denial in the Arab and Muslim world, for arranging this unprecedented visit together with UNESCO and the Paris municipality.

Here are the reactions of some of the visitors, according to Ynet News:

"I feel true pain," said British Imam Abdul-Jalil Saeed as he walked through the shacks of Birkenau.

But what he said next shows the dangerous distortions which some visitors applied to what was undoubtedly a deeply emotional experience:

"I believe the Muslims must stand by their Jewish friends, because anti-Semitism in Europe is on the rise and where there is anti-Semitism Islamophobia is not far behind. It is a matter of educating our future generations," he said.

I must have missed all those Muslims attacked in the street and mosques needing extra security in Europe. Some say that Islamophobia is an 'ideological fabrication'. This attempt to equate the two ignores the fact that antisemitic incidents outweigh anti-Muslim ones.

Dr. Mohammed Rajani, one of the Palestinian members of the delegation, remarked:

"It makes me understand the importance of faith, man's ability to rise from the ashes and build a better world. This is hell on earth. We must do better things, look out for one another – Muslims, Jews, atheists – so we can have heaven and not hell," he said.

But he also remarked on comparisons often made between the Holocaust and the Nakba, or expulsion of Palestinians from their land in 1948.

"We do not compare the Nakba and the Holocaust as if the atrocities that occurred are on the same level, but rather in the sense of a man living at home in peace and security when suddenly evil comes and he is thrown far from this security," he said.

In other words, he made just such a comparison.

André Azoulay, a senior adviser to King Mohammed VI of Morocco who is also active in the Aladdin Project, said:

"For the first time dozens of Arabs and Muslims are here with us, proving that the Arab world is not just comprised of anti-Semites and Holocaust deniers. We are here today to remember history, to remember that Nazi barbarism was European and Christian but in those times there was light from Arab countries."

Mr Azoulay conveniently forgets that a pro-Nazi coup in Iraq resulted in the 'darkness' of a two-day pogrom against the Jews in June 1941 and that there was extensive popular sympathy for the Nazis in the Arab world. The Mufti of Jerusalem was an active ally and supporter of the Nazi project to exterminate the Jews; he spent the war years in Berlin.

"I am proud of my country, Morocco, for refusing to impose Vichy law and Nazi law on its Jews, as well as of the fact that in many countries in North Africa, from Morocco to Turkey, the righteous of the nations said no to the Nazis. The world must also recognize this aspect," Mr Azoulay continued.

While it is true that the Moroccan king did express his sympathy for the Jews, his powers under the Vichy regime seemed limited to using delaying tactics when signing off Vichy laws. And as the author of Among the Righteous, Robert Satloff, writes, wartime North Africans were no different from Europeans. Most Moroccans were indifferent, some saved Jews and some persecuted them. Several hundred Jews died in labour camps on Moroccan turf.

Mr Azoulay does nobody any favours by trying to sanitise history. The danger is that well-intentioned initiatives such as that of the Aladdin project could be perverted in order to exonerate Arab countries of complicity with the Nazis. It also whitewashes the ethnic cleansing of a million Jews from Arab lands barely a few years after the Holocaust.

Read article in full
Posted by bataween at Wednesday, February 02, 2011

Bataween, the stated objective of the Aladin Project is not merely to commemorate the Holocaust, but to use the memory of the Holocaust to eliminate new forms of hatred and intolerance.
This is also the stated purpose of the teaching of the Shoah: teach the Shoah because it benefits all mankind.
So why compain?

I believe the Aladdin project's aims are perfectly laudable - indeed, teaching the Shoah benefits all mankind, as you say.

But the danger is that the message is being manipulated to serve various agendas. Spurious comparisons are being made between the Jewish and the Palestinian Holocaust, antisemitism/ Islamophobia. The Arab/Nazi alliance with its shared objective of Jewish genocide is obscured so that the Holocaust becomes a purely European phenomenon. In other words, the campaign secures Holocaust acknowledgement while Arab/Muslim antsemitism is being denied. Is this satisfactory ?

Veronique Chemla has already tackled some the dangers here
http://jewishrefugees.blogspot.com/2009/10/islamically-correct-meeting-bolsters.html

Exactly. It is an Israeli project I would call "How do you shoot yourself in the Foot". Which is why we must say and repeat that Israel was founded not because but despite the Holocaust.