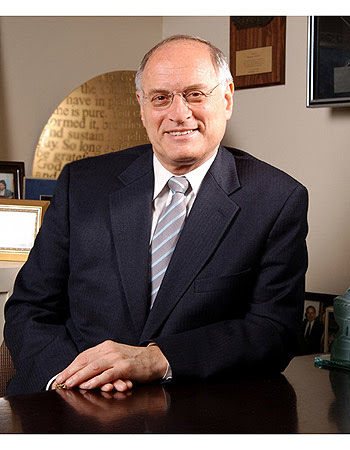 Oh no! Syrian President Bashar al-Assad has agreed to the restoration of the country's synagogues and cemeteries, especially in Damascus and Aleppo.

Assad made his pledge, al- Ahram reports, during a meeting about 10 days ago with Malcom Hoenlein, the kippa-wearing executive vice-chairman of the influential Conference of Presidents of Major American Organizations. Hoenlein was not sent by the Israeli government, but was on a 'humanitarian mission', according to Ynet News.

Why greet this piece of news with dismay? The restoration of the crumbling and abandoned Jewish heritage in Arab countries must surely be a good thing. It will remind Arabs that Jews, whose history in Arab countries their regimes are so eager to erase, lived there continuously since Biblical times.

Equally, though, acceding to Hoenlein's demand would be handing Assad a PR-opportunity on a silver platter. It would be a chance to earn brownie points with the US at comparatively little cost to Syria - a cost easily recouped in tourist revenues. In this trend Baby Assad would be following Egypt, which lavishly restored the Maimonides synagogue in Cairo last year. Or Lebanon, where the Maghen Avraham synagogue in Beirut is being renovated with the blessing even of Hezbollah.

Never mind that Jews are not allowed to pray in the Maimonides synagogue. Never mind that in Lebanon there are not enough Jewish men to make a minyan (quorum). Never mind that their once-flourishing Jewish communities are on the brink of extinction. These synagogues will never be more than museums.

The rest of Hoenlein's shopping list for Assad involved only dead Jews. He asked for the return of three Israeli PoWs missing during the First Lebanon War in 1982 - presumed dead. He also asked for Syria to return the executed Israeli spy Eli Cohen's bones for burial. Restoring Syria's 18 cemeteries will allow the regime to engage with dead Jews, without the embarrassment of having to deal with live ones.

In failing to extract meaningful concessions from Syria, Hoenlein is making the same mistake as the Obama administration, which for the first time since breaking off diplomatic relations in 2005 over Syrian complicity in the assassination of Lebanese president Rafik Hariri, has just appointed a US ambassador to Damascus - while asking for nothing tangible in return.

The US-based Jewish businessman who arranged the Hoenlein-Assad meeting, Joey Allaham, 35, sounds like an apologist for the Syrian regime.

"Syria is not Egypt or Jordan. The Syrians have a different mentality. They want to do business and enjoy life. They are not concerned with politics. They did not ask for anything in return, they just wanted the Jews to see that the Syrian government respects the Jewish religion," Allaham said.

Allaham would have been too young to recall the terrible Seventies when Jewish men were kidnapped, girls raped and the remainder of the community held as hostage, unable to leave the country. He would obviously have had no recollection of the violent pogrom of 1947 which forced half of Aleppo's Jewish population to flee, following the murder of Jews and damage to the Great Synagogue (below) he is so anxious to see restored.

The Jewish quarter was razed to the ground. The businessman would not have been around in 1950 when the Syria passed a law seizing Jewish property, now being tastefully restored as boutique hotels and tourist shops - without the prior consent of the owners.

We don't need Jews to come cap-in-hand to vile dictators and entreat them, like dhimmi supplicants, to meet their timid requests.

We need Syria and all the other Arab countries which drove out their Jews and stole their property to issue a formal apology to the live Jews in Israel and the diaspora who are their descendants.

An apology may seem a lot to ask, but an acknowledgement of the wrongs suffered on both sides will do more to achieve reconciliation than anything else.

Cross-posted on Harry's Place and Solomonia

The Jewish Palate: The Jews of Afghanistan