A Jewish sense of 'deja vu' about Egypt 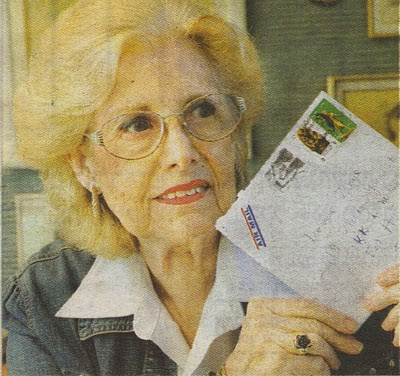 No more letters from Cairo....Levana Zamir is cut off from her Egyptian friends (Maariv)

Egyptian Jews in Israel are glued to their TV screens, anxiously following events on the Cairo street. But they have a feeling they have seen it all before, Levana Zamir tells Akhikam Moshe David in the Israeli daily Maariv. Translation from the Hebrew:

The recent images of riots in Egypt are 'deja vu' for the Jews from Egypt in Israel, reviving sights of the streets and smells of Cairo, which can never be again what it once was. For Levana Zamir who today lives in Tel Aviv, the recent events did not come as a surprise. It is like closing a circle: She and her Vidal family suffered the anger and rage of the Egyptian population in the late Forties, now directed against wealthy Egyptians and the government.

Since Thursday she has been glued to the TV, trying to identify her remaining friends in Egypt and looking in disbelief at what is happening in her native country.

"All these days, I was thinking how proud I am of the Egyptian people," she says. "I have friends in Egypt, but I cannot ‘phone them or send them an email, because it could do harm to them. Even in normal times Egyptian censorship makes it hard, and it certainly does now", says Zamir, who is President of The International Organization of Jews from Egypt, and of The Israel-Egypt Friendship Association.

"When I see the flames and the looting, it is impossible not to recall what they did to the Jews. The Egyptian population in its poverty and anger lashed out at us in 1952, burning and looting Jewish businesses. Today it is doing the same thing to the Egyptian elite," she explains. "Only this time, the hatred against Jews has been replaced by hatred against rich Egyptians".

The Jewish community in Egypt is almost non-existent. Only a few remain. The Egyptian authorities are careful to preserve the ancient synagogues, mainly as archaeological relics. The police have stopped guarding those synagogues, and in Cairo they have been replaced by military guards. But there is still anxiety and concern lest the Great Eliahu Hanavi Synagogue, symbol of the once glorious Jewish Community of Alexandria, fall into the hands of looters.

as Levana said it is deja vue -i still can smell the fire of 1952 when they burned the shops the tamway - and all those peoples who are in the street now shouted EDBAH EL YAHUD -this is the only difference for me between the fire this time and the one in 1952 -there ae no more jews in Egypt now thanks God -but still i do not envy this people ,they think they will get a democratie ,they are just dreaming because Islam is here waiting just for this kind of momentum to take charge ,at my opinion it will be worse now -they will never get the democratie they are dreaming for.
may God help them and help us
calamaro lucie

Anything I say about the turmoil in Egypt will only be more than déjà vue!!!Ask any Egyptian Jew and he will tell you the same thing.
The one overwhelming sentiment is: Thank God we are no longer there!!!
However, the screams of the protesters today remind me of our terror when a group barged into our building (1952) looking for Yahoud to slaughter and our bawab(porter) who told them "mafish yehoud hena" there are no Jews here.". We owe our lives to our Bawab. We were on the roof with my nonno, who thinking he was the Massada leader Ben Yair, held a kitchen knife in his hands saying he would slaughter the women before leaving them into the hands of the mad crowd. In spite of the horror I keep this precious image of an elderly man with his knife determined to protect us.
The Egyptians sadly will have the government they deserve because of their lack of restraint, and no political know how of which they were deprived by the successive leaders: first their king (Farouk), theN Nasser who hated us Jews and for the past 30 years Moubarak.
it's a great pity, because as one of my friends said: Egytians are charming people between two wars!!!
sULTANA LATIFA? 5UZY vIDAL°A JEWISH REFUGEE FROM EGYPT
;

I was lucky to being at uni in France and yet horrified by the headline of Cairo burning in the local papers. I feel sorry for Egyptians and afraid for the future. Yet it could be beautiful if they would only say Peace be upon you. Albert Bentata.

Yes, I also remembered the burning of Cairo in January 1952 and I felt thankful that I and all others, jews and non-jews alike who where there then are away out of Egypt now. It was 59 years ago to the day that Cairo burned, now it seems to be all of Egypt or its major cities. It was then for one day, now it is going on for the tenth day and will possibly continue for more... It was then directed against its "foreigners" or so-called "foreigners" in Egypt, now it it is directed against itself, "a civil war?" The people, the masses against the elites, the have-nots against the haves. A few years ago they would have characterize it as a "communist" or "socialialist" revolution or uprising... Let us just imagine 59 years ago with Gamal Abdel-Nasser haranguing the people, wanting and trying to remedy the wrong, his disagreement with the United States of America's apparent imposing policies... Today and for more than 30 years President Mubarak and its predecessor have been attempting to please the United States of America by follolwing them, acquiessing to their desires and doing what is necessary to keep it so. If only the United States of America were more attentive to, in this instance the need, desire and ways of Egypt and the Egyptians (all Egyptians), as well as all inhabitants of our planet instead of seeking their own self interest may be we would not have now arrived to this point, the chaos or worse, in Egypt and elsewhere in our world including the Palestine crisis.

Because I was born and brought up in Cairo, people have been asking my
thoughts on what has been happening in Egypt.

I didn't tell them, how often groups of villagers would be bussed into
Cairo, down our street, which was one of, if not the main street. They
would alight in front of our house, where there was a Turkish
pastry/candy store, Hadj Bekir, and would shout "let's kill the Jews",
while we trembled in our apartments, in the dark, with all the shutters
closed to show that we were not home.

I didn't tell them, how often I would walk in the streets and all of a
sudden a mob would get together, and attack some foreigners and stone
them to death, while I hurried on

I didn't tell them that the Muslim Brotherhood has been trying in vain
to gain power and have Egypt become an Islamist state. The dictators
like Nasser, Sadat, and Mubarack prevented them, and the trade-off is
that they kept a heavy hand on the populace to stay in power

I didn't tell them that Americans never understand the Middle Eastern
mentality. Those were not spontaneous riots. Those were very
well-orchestrated riots. Proof? All the signs that are printed in
flawless English. Why English, not Arabic? If the rioters are the poor
downtrodden Egyptians, who arranged/paid for all that? The English
signs are to hood-wink the Americans into thinking that they want
democracy

I didn't tell them that Americans are swallowing it

I didn't tell them that when I heard about the riots, about the dead,
about the looting..... I didn't even cry, because "I felt NOTHING".

I did tell them, that I was expecting this.

I think I know Viviane Franco from school. If so , happy to read you in point of no return.
We were all shaking during that horrendous day. And NO POLICE came to our rescue.As usual. We were only Yehoud not worth a shit!
sultana latifa
a former inhabitant of Cairo