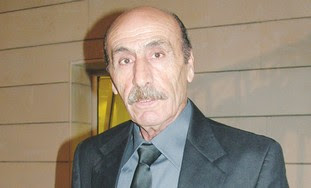 Kurdistan-born Yosef Shiloah, who died earlier this month aged 69 after a long struggle with cancer, was one of Israel’s best known and most beloved comic actors. Shiloah played the hypochondriac Faruk in Alex in love. Obituary in the Jerusalem Post:

“For the dozens of unforgettable roles he brought to life, Yosef Shiloah today is synonymous with the words, ‘Israeli Cinema,’” wrote the organizers of the Jerusalem Film Festival in the citation for Shiloah’s Life Achievement Award at the 2009 film festival.

Shiloah, an unusually versatile and charming actor, moved with ease among every film genre, from low comedy to crime thriller to serious drama. Invariably sporting his trademark moustache, he was the kind of actor who made it look easy.

Although he won many awards throughout his career, including the Ophir Award for Best Supporting Actor for his performance in Desperado Square (2001), critics at times attacked him for playing caricatures. While many of his most memorable roles involved broad comedy and ethnic stereotypes, that was more a reflection of the Israeli movie industry in an earlier era than a sign that Shiloah was anything other than a firstrate actor.

He dismissed these criticisms, saying repeatedly that he was an actor who sought to bring to life the humanity in every role he played, and that his acting worked to counteract ethnic prejudice.

Born in 1941 in Kurdistan, the actor, whose original name was Sirus Yousefian, immigrated to Israel in 1950. After studying acting in the first class at the Beit Zvi School in the early Sixties, he became a film star in the early Seventies in the ethnic comedies and melodramas known as “bourekas movies.” He often played criminals (of Persian or other Mizrahi descent), in films such as The Policeman, aka Ha Shoter Azoulai (1970) and Snooker, aka Hagiga B’Snooker (1975). He also starred in many of the more artistic films of that era. He collaborated with two directors in particular.

One was Moshe Mizrahi, with whom he starred in the films I Love You, Rosa (1972) and The House on Chelouche Street (1973), both of which were nominated for Oscars. He also had a fruitful partnership with Boaz Davidson, for whom he starred in a number of films, including Snooker, Private Popsicle (1983) and most notably the hypochondriac Faruk in Alex in Love (Alex Holeh Ahava) in 1986.

Read article in full
Posted by bataween at Friday, January 28, 2011

OT
Bataween
How about a live thread on the situation in Egypt to be updated as it unfolds over the weekend? I realize it is not in the scope of this blog but I am sure you could find an angle to make it fit. There are already some unconfirmed reports that Al Baradai has been arrested.

Not quite my beat, Sylvia, but watch this space.

I have been watching developments in Egypt, and I can only say i am happy I no longer live there.
It was very usual to blame everything on us El Yehoud!
This time it's not our fault!
sultana latifa: Jewish refugee from Egypt