Egypt to speed up restoration of synagogues 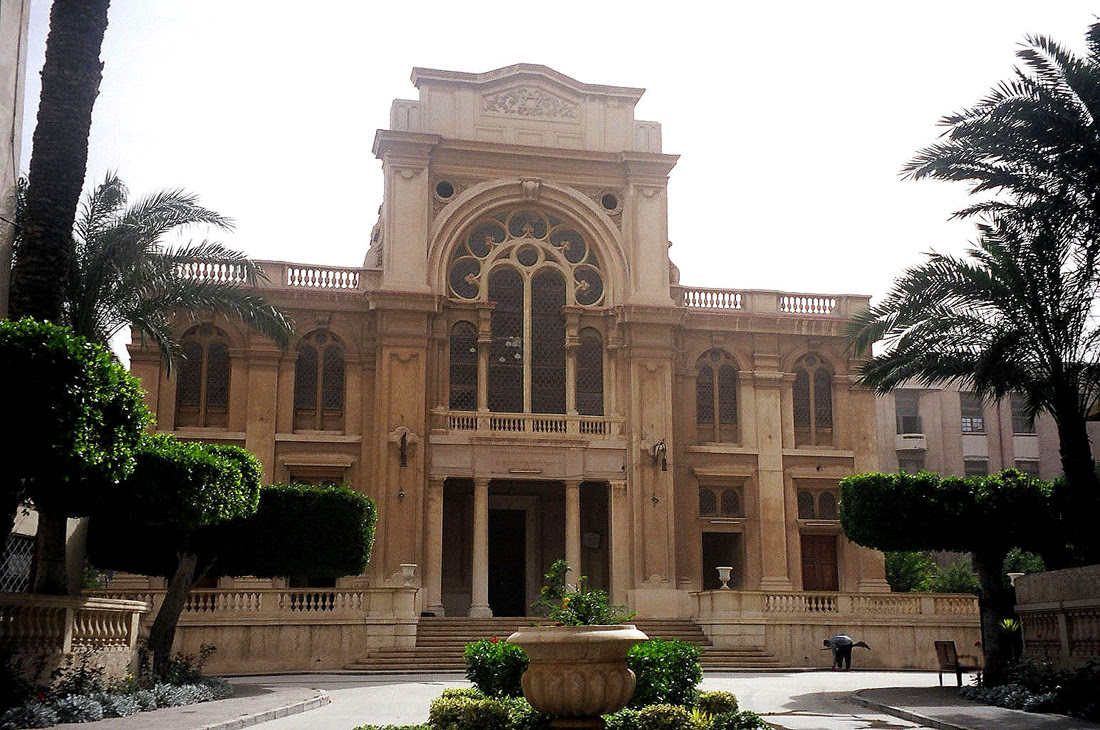 The Eliahu Hanabi synagogue in Alexandria ... ledge has crumbled

There is bad news and good news from the Nebi Daniel Association, whose mission is to preserve Egypt's Jewish heritage. There is still no progress on the copying of the communal registers, which Egypt will not release. The Maimonides (Rambam) synagogue, lavishly restored last year, is more often than not shut for 'security reasons'. But the good news is that thanks to the personal intervention of the Culture Minister, Farouk Hosni, and the Director-General of Antiquities, Zahi Hawass, a plan for the repair of the crumbling Eliahu Hanavi synagogue in Alexandria and the restoration of two others has been brought forward by a year. New Year report by Yves Fedida of Nebi Daniel:

"Two articles (here and here) relative to the same event recently appeared in both the Egyptian and Israeli press. Therein lie some New Year cheer in the midst of the daily media bluster
and hallucinating threatening swagger of Persian Strangelove or the blind intolerable acts of hatred that ushered in the year 2011.

"Flashback 1 - Saturday 29/08/2009, lobby Marriot Hotel, Zamalek, Cairo:
We’re on a mission for the Nebi Daniel Association. Together with Alec Nacamuli, I call Mr. Ben Gaon, President of the Jewish Community of Alexandria to confirm my arrival on the following day. We inform him that we’re invited at M. Farouk Hosni’s private residence, and that we’re about to raise, yet again, the question of copying our registers. We ask for his renewed confirmation that there will be no objection in principle on the part of the Alexandria community. We inform him of the running progress on the Rambam Yeshiva.

"Mr. Gaon renews his agreement in principle, but sounds the alarm on structural degradation at the Eliahou Hanabi synagogue. Part of the ledge has crumbled and numerous important cracks have appeared. He has alerted the appropriate authorities many times before to no avail. He requests we urgently seek the Minister’s intervention with these authorities.

"This is exactly what we do later on that evening when, there and then, when the Minister of Culture, M. Hosni, calls Dr. Zahi Hawass, Director General of Antiquities. We have been aware for the past couple of years of the synagogue restoration master plan, but our aim is to stress the urgency for Alexandria.

"On arrival there the following day, a smiling Mr. Gaon greets me with his usual kind and hospitable nature. He is happy since a team of specialist in different fields, engineers and architects, have been busy examining the imposing building since 7.30 am, having left Cairo in the middle of the night. They are led by Mr. Abou Hommos and accompanied by M. Waheed Ibrahim, responsible for the North Coast Antiquities.

"They are teachers at Cairo University and form a team in charge of all technical consulting prior to restoration of any pharaonic, Islamic, Coptic or Jewish building. The contact is friendly. Is this too good to be true? Mr. Abou Hommos confirms: ”But for the Minister’s intervention and Dr Hawass’ instructions we would only have come in more than a year’s time.

"Flashback 2 : February 2010: " together with Roger Bilboul we’re back in Cairo for the Association. We are following up, of course, on the video promise: but more importantly on theMinister’s written confirmation concerning the registers. Our objective is to understand whether it is possible to copy them. We take advantage of some free time to measure the Rambam evolution and also decide to call on the Cairo University team that I had met in Alexandria. A friendly welcome awaits us; they show us drawings, pictures and the nucleus of their study, which will form the basis of the final report to be handed to the Director General of Antiquities. We are told the study will have cost over $50,000 and will be complete by summer.

"We are impressed by the methodology, the technical means at their disposal and the keen interest taken by the team for this work. The following video has been posted to illustrate all the above:

"Cairo, December 10th 2010 : "Frustration is setting in for Roger and me. We have still not achieved our goal to copy the registers. This is my 4th trip in 16 months! Eight years of trips to Egypt and, as always, we feel “this time is different”. Roger is only half joking when he mumbles, “we’ll be saying the same thing in our wheelchairs”.

It is a fact that following the Minister’s letter and our meetings in Cairo of last February and March, it’s been eight months that we’ve been waiting for a visit to Alexandria by the Antiquities Department to ascertain “whose responsibility it is, to ensure a copy of the registers” so that we may get on with the next step. It seems unforeseen difficulties of access to the documents in the synagogue now require to be addressed. Whilst we are in the doldrums with no meeting in sight a text message arrives: Come at 3pm - Dr. Hawass.

"We meet Mrs. Carmen Weinstein, President of the Cairo Jewish Community. She informs us that a large part of the Bassatine cemetery wall has crumbled and the cemetery is in an even worse state of disrepair due to lack of funds. She states that she has but three community registers…

"We also meet Rabbi Baker of the AJC who saw Dr Hawass the day before on the on-going subject of a Jewish museum in Cairo. We all concur that we will suggest a permanent exhibit on Maimonides at the Rambam synagogue in order to ensure it opens systematically and more frequently instead of being shut for “security reasons”.

"Together with a promise of a written project, this is in effect what we do when we see him the following day. The “ unforeseen difficulties” are ironed out and a promise of an upcoming visit to Alexandria is extracted. He then confirms that restoration work promised on the Eliahou Hanabi Synagogue will start with their budget year in July 2011. He further adds that the Capucci Synagogue (17th C.) and the Hanan (1900) will also be restored to their former glory.

"We bring the good news to Mr Gaon the following day, when filled with the same joy and gratitude we duly note that he too kept his word. The height of the Mazarita cemetery wall, over which unabashed garage mechanics have been throwing their garbage, has been raised over a stretch of over 30 meters.

"Our hope is that, by accepting our just demands, Egyptians of goodwill help prove that our native country, eager as it is to preserve our common memory, has not forgotten its ancient tolerance. Come what may, we are grateful for their action. In the matter, scepticism is understandable, but however modest be the result achieved over the past 8 years, reason must in all honesty acknowledge them."
Posted by bataween at Sunday, January 09, 2011

Anonymous: in the book the man in the white shark skin suit the protagonist sleeps at the maimonides synagogue in order to receive a miracle cure for an illness. perhaps your father did something similar.

Separately here is an interesting article for the site

The same haaretz propaganda/crap.
They were more honest when they published things like "We have here a people whose primitiveness sets a record", about Mizrahi refugees.

But if those refugees were supporters of the palestinian cause I bet they would be described in the same gentle and sweet way as this guy. (Maybe they didn't even charge him for his book's advertising. He payed them with those politically correct platitudes.

So haaretz considers talking about one's "mizrahiness" a forbidden subject only when it comes to non-leftists? OK.

Almog Behar is one of 'Somekh's boys' - having been influenced by Sasson Somekh, the professor of Arabic literature who has a track record for rewriting history in order to show his affinity for Arabs and Arab culture.
Somekh and Behar take the proto-Marxist view that Mizrahim have been torn away from their 'Arab' roots and their identity suppressed by the Ashkenazim. Behar eagerly supports leftist causes, such as the Sheikh Jarrah protest, without a thought for the Mizrahim who used to live in the area and lost their homes to the Arabs in 1948. So ironically, Behar is guilty of siding with Ashkenazi leftists who are suppressing Mizrahi rights to reclaim or own property in Sheikh Jarrah. He is one confused individual, IMO.

Bataween, Jewish families lived around the Shimon haTsadiq tomb for many years. These people were Mizrahim. They came under attack in December 1947 according to a prior post on Point of No Return, and were fleeing by the end of December. Apparently they had all fled by mid-January 1948. I think that the dates are very important. Jewish refugees driven out by Arabs preceded Arab refugees in that war that Benny Morris now calls a civil war. That is, up to May 1948 the war in the country was a civil war. In the early months of the war, the Arab forces had the upper hand in the civil war and boasted of it.

Exactly, Eliyahu. But where are the leftist protests in support of these dispossessed Mizrahim?

the opinion column at the link by Jonathan Tobin of Commentary magazine discusses world reaction to the demolition of the former residence of Haj Amin el-Husseini who wanted to do to the Jews in Arab countries what the Germans were doing to the Jews in Europe. The residence, later converted into the Shepherd Hotel, is also near the Jewish Shim`on haTsadiq Quarter.