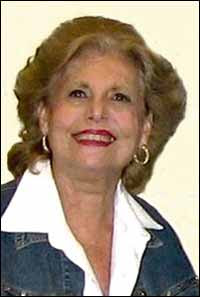 Egyptian-born activist for Jews from Arab lands Levana Zamir (pictured) is grateful to American president Barack Obama for comparing the suffering of the Palestinian refugees to that of the Holocaust in his Cairo speech of 2009. For it was only in his response to Obama at Bar Ilan University, she claims, that Israeli prime minister Benjamin Netanyahu acknowledged that the only comparison between the Palestinian refugees was that of the even greater number of Jewish refugees who had been expelled from Arab lands. Interview with Levana Zamir in the (Manchester) Jewish Telegraph:

Before that speech, Bibi 'had shown no interest whatsoever'* in the issue of compensation for Jews from Arab lands, championed by the organisations Levana heads.

But that Bar Ilan speech led to the Knesset passing a bill earlier this year aimed at gaining compensation for Jews from Arab lands in any Middle East peace agreement.

Levana says: "It is a first step."She adds that despite media reports that Israeli-Palestinian peace negotiations had broken down, they were still carrying on behind the scenes and that for the first time, after decades of lobbying the Israeli government, reciprocal arrangements to compensate both Palestinian and Jewish refugees were on the negotiating table.

Levana's Egyptian roots stretch back more than 2,000 years to Hellenistic times. An expert on Egyptian cookery, Levana - who is a great-granddaughter of a top Cairo hotelier - said on a recent Israeli TV programme that the family recipes she had inherited went right back to the biblical "fleshpots of Egypt".

Her mother Esther Vidal had been both happy and sad when she had given birth to a girl in the middle of six boys. A closet feminist who later inspired her daughter to her great achievements, she said at the time of Levana's birth: "A girl is a beautiful creature with broken wings."She later insisted that Levana attend an international conference of women in Nairobi in 1985 and become involved in women's issues.

Esther, whose domain was only in the kitchen, was so particular about kashrut that she never allowed the servants touching the food during cooking. The daughter of the proprietor of one of Cairo's largest publishing companies, Levana - like most Jewish girls from wealthy backgrounds - was educated in a Christian school.

She said: "Before the founding of the State of Israel in 1948 we never felt anything wrong with mixing with Muslim girls. The Christian, Jewish and Muslim girls were all friends."

But these excellent interfaith relations were suddenly disrupted on the day that the State of Israel was declared. She recalled: "At midnight on May 14, 1948, four Egyptian officers and four policemen broke into our villa. I was 10 years old.

"I remember as if it were yesterday. I was seated on my bed, my parents standing pale in my room and the officers searching all over, opening drawers and closets. They tore the house apart, but they found nothing and left.

"They did the same to my uncle Habib, my father's brother, but after finding nothing in his house, they took him to prison without giving explanations - as they did to hundreds of other Egyptian Jews that same night. The next day, May 15, my father found his printing business confiscated by the Egyptian authorities.

It was a family business, one of the biggest in the printing field in Cairo with 60 workers. The false reason given was that Habib Vidal was a Zionist, an enemy of the country, and that the Egyptian government was confiscating any properties belonging to Egypt's enemies.

"Bank accounts were confiscated. Three Vidal families - 24 people - found themselves on May 15, 1948, with no livelihood. Till June, 1948, 2,000 other Jewish families, found themselves in the same situation."

Levana said: "I realised that nothing would be the same again. Jewish people, including Levana's 17-year-old brother, were beaten in the streets, sometimes to death, under the eyes of Egyptian policemen. Thousands of Jewish businessmen, including Mr Vidal, were accused of falsifying their income tax statements.

The family home and belongings were confiscated by the authorities, but Mr Vidal bribed Arab friends to buy them back so they could stay longer.

But after 16 months, when Levana's uncle Habib was released from prison, the rest of the Vidal clan left with him for France, taking only one suitcase for each.

The Vidals were housed for a few months in a Marseilles transit camp, four families squeezed into a tiny space - a far cry from their former luxury.

It was then on to a Tiberias transit camp with equally harsh conditions. Levana recalled: "Nine of us were living in a tent in the cold of December. The Tiberian winds blew the tent over and the rain poured on us.

"Many floundered in the traumatic process in which Sephardi immigrants were treated as second-class citizens in the yet poorly equipped Jewish state. But strength of will pulled the Vidals through.

Levana said: "My mother was very strong. After she died we found her diaries and discovered that she cried every night. "But we never knew. My father coped only because of my mother's strength. "She always told us we had to work and study."Levana's mother turned down an offer of a Tiberias apartment because the city had no university and insisted the family moved to two rooms in Tel Aviv. Levana's father Victor, who knew many languages, worked as a director of a hotel reception and was later one of the founders of the International Association of Jews from Egypt, which was formed after the mass expulsion of Jews from Egypt in 1956. Levana, who excelled at school and worked from a young age, married Egyptian-born accountant Ezra Zamir when she was 18. As a mature student and mother of two daughters, when she was already working as a PR director of a French Israel-based aeronautics company, she graduated in business management at Tel Aviv University.

She later became director of the Anti-Drug Abuse Association. With the elation which accompanied Egypt's peace accord with Israel in the late 1970s, Levana was asked by the Israeli ministry of foreign affairs to become president of the Israel-Egypt Friendship Association. Meanwhile, despite an Israeli Supreme Court ruling in their favour, Levana's father's organisation, the IAJE, had failed to gain compensation for Jews from Arab lands in the peace agreement with Egypt. After her father died in 1984, Levana found addressed to her a letter from him, detailing his request for compensation for what he had lost.

She said: "He was telling me to continue to ask for compensation. I have been working on that since.

"Nearly a million Jews were expelled and only 650,000 Palestinians. They can't go back.

"But they can receive compensation and so should we."

*This is debatable: see comments.
Posted by bataween at Thursday, January 13, 2011

I would not agree with Levana that PM Netanyahu only discovered Jewish refugees from Arab lands after Obama's Cairo speech. In fact, while Olmert was PM, the minister for retired persons' affairs [or somesuch title], Rafi Eitan, convoked a meeting in Jerusalem on the issue of compensation for Jews from Arab countries. One of those who addressed the meeting was Uzi Arad, who is Netanyahu's top advisor. He gave a good speech. He was already Netanyahu's advisor at that time. So, if Uzi Arad already talked about the issue while Olmert was PM, then I think that we can assume that Netanyahu knew about it and backed the effort, led overtly at that time by minister Rafi Eitan.

It's your site of course, and you can put in it anything you want. But I think you should screen the articles you introduce for accuracy no matter what political sauce they come in, right or left. Or else you might lose your credibility. Levana Zamir has already lost hers.
First, Netanyahu in his FIRST term has been bitterly criticized for calling for an inventory of Jewish assets in Arabo-Muslim lands. That was in the late 1990s. When Ehud Barak won the election in 1999, he gave the Justice Ministry to Yossi Beilin who in that capacity took out the subject of Jewish assets/compensation out of the agenda.
It came up again in public debate with the American invasion of Iraq and the fall of Saddam Hussein. Yehuda Shenhav even took a position against in the pages of Haaretz in 2003. It remained in the public sphere - but still out of government sphere) until 2008 during the Olmert government when the Shas party called for compensation for the Jewish refugees of Arab lands. And the first thing Netanyahu has done when he got reelected in 2009 was revive the issue through Danny Ayalon.
But credit Obama with reviving this issue beats anything I've ever heard so far. Sheer insanity.

Hi Sylvia,
You make a fair point - this is of course Levana's claim (I've added quote marks). Well of course the issue of Jewish refugees has been ebbing and flowing in the public sphere for years now,as you rightly point out. Levana Zamir would have known this better than anyone, as she was one of those most closely concerned, in her capacity as head of the Egyptian-Israeli Friendship Association. As Eliyahu says, the Ministry of Pensions first took on the portfolio of claims collections four years ago, but nothing much happened while the PM was reluctant to pursue it.

But what is new here is that Obama's speech provided the CATALYST for Bibi to make the issue one of government policy. Confronting the US president's ignorance on Jewish refugees became a matter of the greatest urgency, and you could say, created its own momentum.