Yad Vashem, the Holocaust memorial in Jerusalem, has turned down Khaled Abdul Wahab's candidacy for recognition as a Righteous Gentile on the grounds that he did not risk his life to shelter 25 Tunisian Jews. His daughter Faiza is disappointed, but her publicity-shy father might not have been displeased. Ynet News reports:

Shortly after the September 11 attacks (Robert) Satloff, a Jew, decided to investigate whether there were Arabs who helped Jews during the Holocaust. He believed that by telling one such story he might be able to make Arabs perceive the Holocaust differently. After a year of research he received an e-mail from 71-year-old Annie Buchris from Los Angeles.

She told him she grew up in Mahdia, Tunisia and that during the war an Arab man welcomed her and her family into his home and hid them in his farm away from a German officer who lusted after her mother.

Satloff was living in Morocco with his wife and two children at the time where he could conduct his research. He hired an interviewer who taped Annie's testimony. For an entire day on 2003 Buchris told her story. She died two months later. 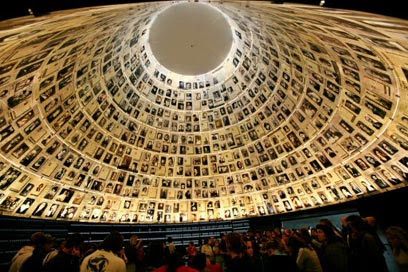 Buchris told the story of her happy childhood in Mahdia with her parents and two brothers until the Germans invaded the city in 1942. Jews' homes were taken and her family's house was turned into residence for German soldiers. Annie's father managed to house the family in an olive oil factory. The men were forced to work in labor camps. The women and children were not allowed to leave the factory.

One night, there was a knock at the door. Standing there was Khaled, the son of Hassan Hosni Abdul Wahab, a rich landowner and former state official. Hassan Hosni and Annie's father Jacob were close friends, and Khaled informed them they were in great danger. He then made arrangements to transfer them to a safe place.

Years later Buchris learned that Khaled used to meet with the German soldiers and get information from them. That's how he found out they had created a brothel housing Jewish girls. One of the German officers also told him that one particularly attractive woman had caught his eye. Khaled realized the woman was Buchris's wife. He got the German soldier intoxicated with wine and drove to the oil factory.

The Buchris family and their neighbors – some 25 people – quickly packed their belongings and were taken to Khaled's family's farm, where they stayed for four months. Each family got a small room. Near the farm was a Red Cross camp tending to injured German soldiers and many of farm's employees knew about the Jews but never spoke of it. In April 1943, when the British entered Mahdia the all the families returned to their homes.

Khaled Abdul Wahab was born in 1911 and died at the age of 86. As a member of a wealth family he often traveled overseas as a young man, most frequently to France. In the early 1930s he studied art and architecture in New York and later worked on preserving Tunisia's archeological heritage.

Satloff met Khaled's oldest daughter from his first wife, Papo, in Tunisia. Papo, like Faiza, knew nothing of her father's legacy. "I'm not angry with my father," Faiza says. "He didn't like to talk. He never said anything about the Jews because he probably thought he did what he should have done. He saw that the Jews in Mahdia were suffering at the Germans' hands and took responsibility. It was a different generation. People didn't use to talk about what they did. "

Meanwhile, Satloff has not given up his efforts to convince Yad Vashem to grant Khaled the Righteous among the Nations title, but to no avail. "I reached the sad conclusion that there are no Arabs in the list of Righteous among the Nations," he says. "Firstly, many Arabs or their heirs didn't want or were afraid of their stories being published. And secondly, the Jews did not put enough efforts into it."

"There are three committees in Yad Vashem who review applications for the title of Righteous Among the Nations and each is comprised of 10 individuals. The plenum chairman is retired Supreme Court Judge Jacob Turkel. The decision is made with a majority of at least two thirds of the votes.

"Three years ago after a long correspondence with Satloff I did a little research of my own of the events in Mahdia and learned that Wahab did not risk his own life doing the noble deed he did. Even Judge Turkel reviewed the testimonies and confirmed the committee's conclusions. No one is doubting the noble nature of Abdul Wahab but clearly the Germans knew Jews were staying at the farm and did not try to hurt them. Meaning, he did not hide the Jewish families but hosted them."

Faiza is familiar with these arguments. "Yad Vashem is an honorable institution," she says. "The term Righteous among the Nations was coined by them and they use their own criteria. It's a pity. To me it's far more important that Rabbi Walberg put up a memorial plate with my father's name on it in his righteous garden, 'Edat Yisrael,' in Washington. And when I come to shake his hand he hugs me. He didn’t wait for Yad Vashem to confirm my father's wonderful actions. "My father opened his home to Jews and Yad Vashem did not open their home to us. When Robert first spoke to me I thought it would be great if they acknowledged the first Arab Righteous among the Nations, but life goes and I've stopped dealing with it. If my father had been alive he would have said: 'Leave me. Stop this publicity.' On the other hand, had there been a ceremony honoring my father with the title I know what I would have said: 'We're more alike than different.'"

I was in contact with Annie Buchris, who specifically told me that a gentleman Arab saved her and her family.

I must admit that Yad Vashem lost my trust for other reasons, such the way they tell the story of the Holocaust in their website. Yahill did state that in Israel, political and social reasons are more important than educational ones.