What's in a name? Not what you think, Mr Masalha 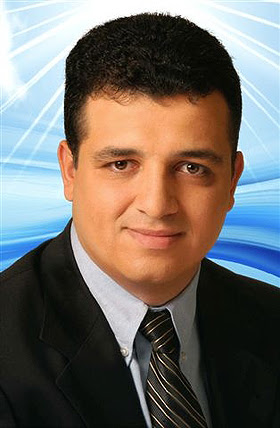 An MK called Carmel Shama has added the suffix 'Hacohen' to his name. This set Salman Masalha off on another 'Israel-is-apartheid' diatribe in Haaretz, arguing that the MK was typical of Mizrahi Jews under pressure from 'European Zionism' to add a Jewish name lest anyone mistake them for an Arab or Druze:

Here, then, is a blatant example of how "Ashkenazi Zionism," from Europe, has corrupted the souls of those referred to as "members of the Mizrahi group," from the Middle East and North Africa.

Masalha claims that by distinguishing between Arab and Jews, the 'Ashkenazi establishment' is better equipped to enforce their 'racist' policies:

It bears noting that the original reason Israelis were required to list their national ethno-religious identities on official documents was to help Ashkenazi institutions distinguish between Jews and Arabs, since many Jews who came from Arab countries had Arab names. At first there were only two categories listed: Jews and Arabs. At a later stage, "Druze" was added as a separate category.

However, Mr Masalha, Jews have always changed their names the better to blend in with the dominant culture. In the West Jewish immigrants have often changed their names to hide their Jewishness. Woody Allen changed his name from Allen Koningsberg and Kirk Douglas from
Issur Danielovitch (and with a name like that, who can blame him?) It's well known that Jews were given absurdly non-Jewish names by US immigration officials at Ellis Island. I know Jews with surnames like Bishop and Bacon. Likewise there are non-Jews called Cohen.

Lots of Jews did change their names on arrival in Israel. Not just Mizrahi Jews, plenty of Ashkenazi Jews did so. David Green became David Ben-Gurion. Goldstein became Even-Zahav. They wanted to create a new Israeli persona for themselves.

Not all Jews from Arab countries have Arab names but some do. It's often a question of fashion. Each era spawns its own names: I know a Jewish Hamid, a Jewish Ihsan, a Jewish Nasser and even a Salman. In the era of the French and British mandates and protectorates, the previous generation of Jews had European names - Albert, or Victor, or Violette, or Bertha. Some of the generation before that had Ottoman names: Selim, Abdullah, Khatoun, Nevine. But Arab names don't make Jews into Arabs, any more than French names make them into Frenchmen or Ottoman names into Turks.

Let it be clear from the outset that these Jews are not Jewish Arabs as Masalha would have us believe. In what sense have they been corrupted by Ashkenazi Jewry? They have always identified as Jews, not Arabs. The semantic discussion over 'Jewish Arabs' or' 'Arab Jews' is one which Point of No Return has covered extensively. And regardless of the Zionist movement's European origins, there are plenty of Mizrahim proud to call themselves Zionists.

Shama is not necessarily an Arab name, although it might be a popular Druze name. I know Jewish Shamas - and there is even a famous Jewish historian called Simon Schama.

Perhaps it was Carmel Shama's first name which was giving him the trouble. After all, there is a Druze village near Haifa called Dalyat Ha-Carmel. I've no idea if Carmel is a popular Druze name - perhaps it is.

However Carmel is also a Jewish name - there are enough Jewish Carmels of either sex to dispel any doubt that it is uniquely Druze.

There could be a final explanation why Carmel Shama decided to affix 'Hacohen' to his name - one that Masalha could have missed altogether. Hacohen means The Priest. For someone who is proud to belong to the noble priestly caste of Israel, it would seem natural for Carmel Shama to want to show off the fact.

This may also possibly be something else: muslims have hi-jacked Abraham, Moses, Noah, all Jewish people from the Torah, as well as Jesus and Mary from the New Testament, saying they are all muslims.

Now what I hear this arab saying, is that all Jews from arab lands, ARE ARABS/MUSLIMS!

This is not the end of this, and thank you for bringing it to our attention.

PS: This is also a typically divisive comment made by muslims, trying to make something of divisions between Sephardic and Ashkenazi Jews, demonising Ashkenazis as "non-Jews" from Kazakhstan or wherever.

In Israel, Carmel Shama couldn't have added the name Ha-Cohen if it hadn't been his all along.
Both Sephardim and Ashkenazim add another name to differentiate between the Cohens. ex: Albert Cohen Scali and Albert Cohen Katzav (one is a jeweller and the other a butcher) and soon while they know they are Cohanim and are recognized as such (for synagogue and burial) they drop the patronym Cohen.
I am sure Masalha knows that and his remark is malicious. Because Cohen is the name that goes back all the way to Moses and Aharon he is trying to say that it is taken arbitrarily.

You are right, Sylvia - he couldn't have added the name Hacohen if he hadn't been one. The question is - did he start using it just to make sure that people were in no doubt that he is a Jew, as Masalha implies?

I don't think there could be any mistake that heis Jewish. I think the context for this attack is a dispute they had a few days ago, after Shama said to an audience that Umm-a-fahm should be in the Palestinian State. Masalha took it to the media I heard them both on Israel radio. Masalha said Shama was advocating transfer. He denied it of course but put this with the fact that he is from the Likud how could he be mistaken for an Arab? There are Jews from NAfrica with the family name of Abdullah who haven't changed their name in Israel. There is also Moha as family name (Berber but means Mohammad nonetheless).

True, Ashkenazis have changed their names a lot more than Sephardim. And among Sephardim a lot more among Iraqis than say, among Moroccans.
Had Shama wanted to emulate Ashkenazim he wouldn't have picked Ha-Cohen. He would have picked a name of light such as Naor, Maor, Orr, Lapid, etc.
Another reason more Ashkenazim have hebraicized their names is that more of then were employed in foreign service.

I've also seen on various blogs and youtube comment threads rhetoric about the "Arab Jews" being pressured by ""Euro Zionism" to abandon "their" Arab language and culture, and then you'll typilcally see examples of how someone's grandparents came from Iraq had to give up being called Abdulla and was forced to call himself Ovadia because of the evil Zionists. Of course, as you pointed out, it was the fashion for all members of Diaspora communities, including Ashkenazim to adopt Hebrew/or Israeli-sounding names and abandon "Exile" languages such as Yiddish or German, in the early years of the State of Israel. Mizrahi Jews did the same. Another point that gets overlooked is that--in the case of Iraq for instance-- many of those Iraqi Jews who made aliyah in the early years of the State of Israel spoke Arabic and their children didn't--true enough--but many of the generation of Iraqi Jews born in the 1920s and 1930s were being assimilated into general Iraqi culture and forgetting the Jewish Arabic dialect that their parents and grandparents spoke in previous generations--they had a unique and distinct Jewish dialect that was separate from the Iraqi Muslims that had largely become lost by the 1950s anyway --but anti-Zionists pretend to lament a forced assimilation of their newly recovered Jewish "brother Arabs" into into so-called "Western" Western Zionism.l

My cousins' grandparents spoke Hungarian prior to making aliyah, but a previous generation spoke Yiddish, my cousins grew up speaking Hebrew exclusively--nobody in our family decries that these Hungarian Jews were robbed of their Hungarian language and heritage.

Isn't it just too touching, too poignant, that an Arab Knesset member reaches out his hand to help a brother, a benighted Jewish Arab who has been misled by the Devil, by Iblis, by Shaitan?? Of course, Masalha is insulting Shama-HaKohen with his unrequested solicitousness. Karmel is a name that I have never heard of an Arab having. So he would not be mistaken for an Arab on that account. Shama is a name of Oriental Jews, presumably the forefathers of Professor Schama too. But I never heard of an Arab having it. HaKohen of course is a distinguished and prestigious Jewish name. That could not have been MK Shama's motivation, could it?

As to Ashkenazic family names, many Ashkenazim had Hebrew names, although usually pronounced in accord with the Ashkenazic pronunciation of Hebrew, such as: Margolis [Margules, & other forms = Margalit in Hebrew], Sofer and Soifer [also a family name among Iraqi Jews, Shohat [Shoihet, etc]. Katz [Kohen Tsedeq].

Then there are Ashkenazi names formed of Hebrew acronyms, Harlap, Remba, etc.

AShkenazim also had partly Hebrew names, like: Abramovits, Rabinovits, Rivkin [descended from a woman named Rivka who may have been a widow or a family breadwinner], Tillemzager [sayer of psalms, Tehilim (= Tillem)], etc. Cohen is a common name among both Ashkenazim & Sefardim as well as Mizrahim. Cohen took several forms in eastern Europe: Kagan, Kogen, etc. Maybe Kagan comes through the Aramaic form Kahana.

What does Masalha propose to do about an Iraqi Jew named Sofer? Should this Sofer change his name to an Arabic equivalent, maybe something like Katib?? The problem is that that name might sound too Christian. What a dilemma!!

Masalha comes over as ignorant and patronising in all this. How would he like it if we were to pass judgement on his own name?