Orwell lives on - at the Jewish Museum

Last week, I was honoured to attend a preview of the Morocco exhibition at the Jewish Museum in London. In addition to leading lights of the Jewish community, Moroccan Jews living in London, and the British-Moroccan Association, it seemed like the entire staff of the Moroccan embassy had turned up, swarming around Her Excellency the genteel Princess Lalla in her Chanel suit, grand-daughter of the wartime king, Mohammed V.
Several dignitaries had flown in specially from Morocco for the occasion, including Andre Azoulay, Jewish royal adviser, who read a message from King Mohammed Vl. The message was about Morocco's Jewish roots, Muslim-Jewish coexistence, Morocco as a beacon of 'democracy, justice and human rights'. 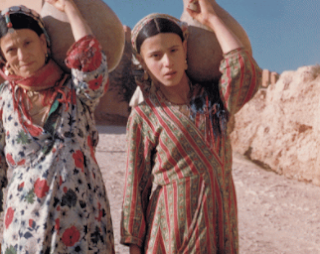 Jews living in the High Atlas mountains  in a photo by Elias Harrus, taken in the 1950s
One spokesman from the Association of Jews from Morocco said that 800,000 Moroccan Jews in exile still considered themselves loyal subjects of King Mohammed Vl. Moroccan money had gone towards financing the Jewish Museum's exhibition, a collection of photographs taken of Jews living in the High Atlas mountains by Elias Harrus, a senior official at the Alliance Israelite Universelle in the 1950s.
The exhibition had come from the Jewish museum in Amsterdam, and other Moroccan events would be held in Paris and New York in the months to come. The Jews in the photographs were dirt-poor, primitive folk who eked out a meagre existence, travelled around by donkey, inhabited hovels and married off their daughters aged 12. The Alliance had done its best to introduce education to their children. These had to be taught how to sit on a chair, so used were they to sitting on the floor. Harrus witnessed the mass emigration of these Jews to Israel.
Vintage film showed a procession of people leaving their villages under the watchful gaze of the men from the Jewish Agency, donkeys carrying their meagre possessions, the old men clutching precious Sifrei Torah.
A recent set of pictures by the Dutch photographer Pauline Prior brought the story up-to-date - ruined homes, crumbling synagogues, decrepit cemeteries. No Jews to be seen (except tourists visiting the shrines of holy men). In fact there is one Jew left in the High Atlas mountains. He tends to graves and any synagogues that are still standing. The captions alongside the pictures did say that these Jews were dhimmis, inferior to Muslims, but the dominating impression was that the Jews and Berbers of this region lived together in harmony - all the more so since the various Berber tribes were busy fighting each other, and looked to the Jews as 'honest brokers'. Berber women wore jewellery made by local Jews.
The exhibition seemed to suggest that Muslims were banned from practising Jewish crafts. In reality, it was the Jews who were restricted to certain trades. The exhibition also seemed to give the impression that the Jewish Agency came to wrench the Jews from their romantic interfaith idyll in order for them to face discrimination in Israel.
One panel carried a quotation from a letter which a rabbi who had left for Israel had written to a Muslim friend in his village. He was homesick; life was nowhere as restful as in Morocco, he wrote.
I spotted one of the guests at the preview studying that quotation intently. On closer inspection, it turned out to be the controversial historian Avi Shlaim.
Among the champagne and canapes we seemed to be in a parallel universe. We were extolling Morocco for its tolerance and democracy when newspapers were being shut down and dissidents jailed. We were talking about happy Berbers in the Atlas mountains when they were complaining of oppression by the dominant Arab-Muslim culture and banned from speaking their language.
We were celebrating the rich diversity of life in southern Morocco when all but one Jew had left. We were rejoicing at a distant memory of Jewish-Muslim coexistence instead of commiserating with its demise. A truly Orwellian experience.
Posted by bataween at Friday, November 12, 2010

Moroccan Jews are very much in demand these days.
Another symposium/exhibit this time in Spain

what I would say about Spain, Sylvia, is that it is very curious that the Spaniards didn't want the Jews in their country as demonstrated in 1492, indeed they even drove out or forcibly converted Jews in other lands under Spanish control, such as Sicily, and later Mexico, etc., but that now the Spaniards don't seem to want the Jews in their own country, that is, in the Jews' country, Israel. That is pretty pure Judeophobia.

btw, there is a long tradition in Spain of study of Hebrew and Jewish subjects. Even in Franco's time, Spain published the academic journal Sefarad dealing with Jewish studies.

Eliahu
This is not about ethnicity but rather about language and culture, about Spanish speaking Jews of Morocco of present and recent memory and their diasporas (the lands they emigrated to). They may or may not be direct descendents of the Jews expelled from Spain.
Contrary to the belief widely held in Israel, the Jews of Morocco/Western Algeria spoke one or more of 5 different languages not including Hebrew(of which Spanish and French were the languages of education).
Bataween's excellent post on the Jews of the Atlas mountains shows only one aspect of that diversity, the Hispano Judios another.

Sylvia, I don't think that you are replying to what I wrote. My main point is that Spaniards did not want Jews in their country in 1492. Now they don't want Jews in the Jews' country. Do you disagree? Do you think that Spain's position today is other than hypocrisy at best and pure Judeophobia at worst?

There is no doubt that the Spanish are antisemites. Today, however, their strong anti-Israel stand in my view derives from pure self-serving foreign policy considerations with implications not only for Spain but for all of Europe.
First they have to divert Muslim attention from the fact that they are still holding two enclaves in Northern Morocco and a number of tiny islands that clearly belong to Morocco. These are true Bantustans and it is true apartheid.
Second if - as Israel's foes claim - controlling the waters next to Gaza amounts to occupation, what would they call the total control of the Straights of Gibraltar by the Spanish Navy.
And third, they have a sizable minority of Muslims from Morocco - many of them also from the Spanish speaking areas of Morocco (not the enclaves).
Imagine that they antagonize Muslims the world over by taking a pro-Israel stand on top of all this. They can't. There are those rightly worried about the situation and the global jihad (I don't know if you read Aznar's article calling to support Israel) but the official position is that to contain angry Muslims, they must be anti-Israel. And since Spain is the backyard of Europe, that explains France's position vis-a-vis Israel as well.
So I don't think their Israeli politics have anything to do with their traditional antisemitism, although it does exist.

Morocco also illegally occupies Western Sahara. It even built a separation wall there. But not a peep from the UN about this.