Israel is a response to Arab oppression of minorities 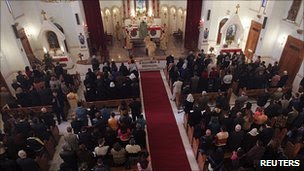 "What is happening to the Christians is what happened to the Jews," an Iraqi Christian told the Christian Science Monitor. Not only is the persecution of Christians too big a story for western opinion formers to sweep under the carpet following the Baghdad cathedral atrocity of 31 October, but the mistreatment of minorities in Arab lands cannot demonstrably be blamed on Israel. The Jews are now the one minority with the ability to defend themselves, argues Dexter Van Zile. Via CAMERA:

The story made it onto the Website of the Christian Science Monitor, which on Nov. 10 quoted an Iraqi Christian who asked that his name not be used as saying: "What's happening to us is what happened to the Jews."

The CSM provides some necessary detail when it reports “Iraqi Jews, once an integral part of society here with a history dating back to Babylon, began fleeing in the 1940s. Now only stories of their once vibrant community remain.”

The publication fails to provide any explanation as to why the Jews disappeared from Iraq – they were being murdered – but even the most obtuse readers can figure that out for themselves.

Christians Not the Only Victims In Iraq: Christians and Jews are not the only victims of this type of violence. This reality was underscored on April 23, 2010 when terrorists hijacked a bus in Mosul, Iraq, ordered all the Christians and Muslims on board to leave and then killed 23 remaining passengers, members of the Yazidi religious sect.

A few months later, Sunni terrorists murdered more than 500 members of this group with multiple car bombings in two villages near Iraq's Syrian border. After the attack, one Yazidi told Reuters “Their aim is to annihilate us, to create trouble and kill all the Yazidis because we are not Muslims.” (Reuters, Aug. 17, 2007).

Taken together, these stories help illuminate a troubling reality that journalists and intellectuals have a tough time acknowledging: Religious and ethnic minorities are treated terribly by Muslim and Arab majorities throughout the Middle East.

Minorities in the Middle East who lack an army and a security barrier to keep would-be murderers at bay are victims of regular violence (such as the Copts in Egypt) or worse, potential victims of ethnic cleansing (such as the Yazidis and Christians in Iraq).

Minority Rights Achieved in Israel: There is however, one minority group in the Middle East that has been able to achieve a modicum of safety in the face of Muslim and Arab enmity – the Jews. With Israel's creation in 1948, Jews from Europe and the Middle East were able to achieve what no other minority in the region has been able obtain in the region – territory in which it can express its cultural identity and protect itself from Muslim and Arab hostility and oppression.

On this score, Israel's creation represents a breakthrough for minority rights in the Middle East. Mordechai Nisan, author of Minorities in the Middle East: A History of Struggle and Self-Expression (McFarland, 1991) puts it succinctly: “In the 1948 breakthrough, one Mid-eastern people achieved independence and majority status as no other people had done.” (Page 234) Jewish independence in the Middle East represents a serious challenge to Islamic hegemony in the region and has in numerous instances served as an inspiration for minorities suffering from oppression at the hands of Muslim majorities to long for homelands of their own.

Instead of directing the world's attention to the mistreatment of religious minorities at the hands of Muslim and Arab majorities in the Middle East and acknowledging that Israel's creation in 1948 was a powerful and legitimate response to this oppression, a significant number of Western intellectuals and religious leaders have portrayed Israel's creation as a cause of (and not a response to) minority suffering in the Middle East.

The irony is this. Instead of condemning the violence against religious and ethnic minorities in the Middle East (and the ideological and theological beliefs that foment this violence) human rights activists and peace activists in the West have facilitated this violence by focusing the vast majority of their attention on Israel – a country founded to prevent the destruction of a minority in the region. And to make matters worse, prominent Western journalists have cooperated with this process.

The church invasion in Baghdad and the ongoing exodus of Christians from Iraq is part of a tuition that ethnic and religious minorities in the Middle East must pay for journalists, intellectuals and religious leaders in the West to come to their senses. One can only wonder how much more of this tuition must be paid.