The Alliance transformed the life of one Tunis girl 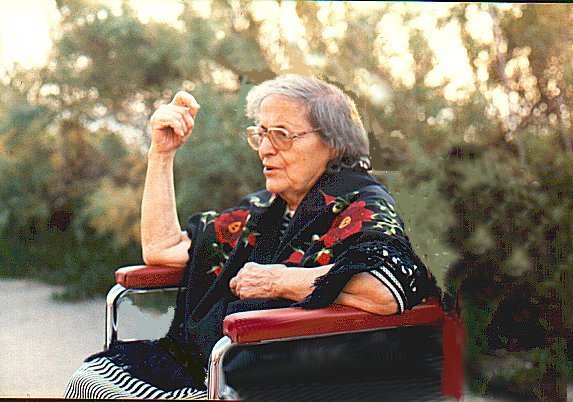 The Alliance Israelite Universelle, founded in 1860 by six French Jews to help their fellow oppressed Jews in Muslim lands towards emancipation through education, is said to have schooled one million children. Allan Solomon 's mother-in-law was among the Jewish girls receiving education for the first time, and was able to apply the language skills she learned at the AIU. Allan was inspired by seeing the film 'In the beginning there was a school' by Josy Eisenberg, part of the AIU's 150th anniversary celebrations in London, to write this on his blog:

"My connection with the AIU is through my wife Paulette, an ex-pupil, and of course my late mother-in-law, Emma Baroukh née Benassein (1895-1998) who attended the Tunisian Girls’ School founded in 1882. My “recollections” come from them.

"The AIU in Tunis insisted that the pupils spoke French. In many cases, the pupils were the only members of the family who possessed this language, as Judeo-Arabe was the lingua franca of the Jews. Young Emma was often summoned by the local French medic to act as translator for his patients. On one occasion the doctor instructed Emma to tell a patient with a gangrenous leg that the limb must be amputated. “Amputated” was not yet a word known to the child, but when the medic explained the term she was able, with obvious joy at this addition to her vocabulary but little comfort to the unfortunate patient, to convey the message.

"On graduation from the AIU, Emma understood that she had now an obligation in turn to teach at the Alliance, but was excused as she had obtained a prestigious post working for the French colonial power. During the First World War, she was attached to the French Naval hospital at Sidi-Bou-Said near Tunis, where she served in the Quartermaster Department, being responsible for food supplies to the French sailors hospitalized there, ultimately receiving an honour from the French government. Her boss was the Admiral Saliège. A fine man and doctor, he and his family adored the 19 year-old Jewish girl. He called her my Rebecca, after the heroine of Walter Scott’s novel Ivanhoe which he and Emma both liked, and gently mocked her insistence on eating her Kosher sandwiches apart from others in the officers’ mess.

"I often wonder if this great family friendship influenced the Admiral’s cousin, Cardinal Jules-Gérard Saliège, Archbishop of Toulouse (February 24, 1870—November 5, 1956), one of the French Yad Vashem righteous gentiles, who gave so much support to Jews during the Vichy period, and to whom ex-President Chirac recently paid tribute in a speech recognizing his contribution.

"The Holocaust saw the essential destruction of the Ashkenazi Jewish community of France. This community was replaced by the Mizrahim, Jews from the Maghreb, displaced from their Arab homelands. The immense success of this new community, providing leaders in French politics, the professions of law and medicine, business, journalism, science, academia – including Academicians and Nobel prize-winners – as well as the entertainment and media industries, is in no small measure due to the education received from the Alliance Israelite Universelle."

displaced from their Arab homelands.?


I feel there is more manipulations in this matter.

May ask you to read in This thesis will help to give better understanding of power holding on those days in Arab land when Jews forced to leave:

The British government had decided to create a kingdom out of their newly gained vilayets and to install a foreign Arab king who would depend on British assistance to maintain his throne in a country that could not claim him as her native son. The primary concerns for Britain was to maintain control of the Socio-economic and foreign policy domains of Iraq while relegating the internal political sphere to the elected ruler. The candidate chosen to occupy the throne was Faysal ibn Hussein ibn 'Ali, third son of the ruler of the Hijaz, Sharif Husayn bin 'Ali of Mecca.11 On 23 August 1921, he was c:rowned Faysal 1 in the new Kingdom of Iraq. 12 Under the provisions of the Anglo-Iraqi Treaty of 1922, a British advisor was appointed to every Iraqi minister of state and to each official post in government. While they were supposed to serve only as advisors to the ministers, they were in fact the ones in charge by virtue of their power to approve or reject any law or provision against British interests. Faysal also had an advisor, Percy Cox, who heId the title of High Commissioner in Iraq. Consequently, the latter had Britain's full support a1Iowing him to wield greater authority than Faysal since he had the backing of the military to secure his demands. Faysal was left in a rather weak position regarding his immediate influence over the political affairs of the country and found himself increasingly relegated to the role of mediator between Britain and Iraq's citizens.

Jews did not leave until 40s and 50s, when Iraqi had already been independent for almost 20 years.
The Jews thrived under king Feisal in the heyday of the British mandate. The 1920s were their 'golden age'.

In a sense you’re both right - assuming that Anonymous means to say that British influence on certain Iraqi affairs was still strong even in the early fifties. . While the Iraqi authorities had absolute liberty on decisions regarding internal affairs (like dispossessing Jews or stripping them of their citizenship), the British could and did put their foot down where certain decisions could affect their foreign policy relations with the Arabs (where and how should the Jews go) well into 1950-51.
A case in point was the amazing attempt of Nuri Said to expedite the emigration of Jews to Israel, now that they were homeless penniless and stateless.
According to Gilbert, he first planned by the end of 1950 to send them directly via a British airline from Baghdad to Lod at the rate of 50 000 a month. The maximum Israel could absorb at the time was 2500 a month and for that reason the British said it couldn’t be done.
Then, in the beginning of 1951, he asked the Jordanian government to allow the Jews to travel to Israel through Jordan in army trucks and under the protection of Iraqi soldiers. When the Jordanians refused, Nuri Said went to Alec Kirkbride, the British Resident, along with Jordanian Prime Minister Rifat to seek confirmation that the British supported the plan. Kirkbride refused.
To by-pass the British, Nuri Said conceived of a third plan – to put Jews in detention centers in the Iraqi desert pending further plans – but this time it was the Regent of Iraq who refused to go along.

"This community was replaced by the Mizrahim [sic], Jews from the Maghreb, displaced from their Arab homelands."

Here is an author who thinks the Maghreb is in the Orient. Heureusement que le ridicule ne tue pas.