The blog Elder of Zion reported last Friday that Moroccans were upset over a music festival to be held the following day in Agadir.

"It is a major festival, boasting many international artists. Last year some 200,000 people attended and this year it will be broadcast to some 30 million viewers.

"The problem? One of the singers is Yael Naim (pictured), who is Israeli (her song "New Soul" was used in an Apple commercial and was a top-ten hit in the US.) She served in the IDF - not in combat, but in the Israel Air Force Orchestra.

"For these reasons, Al Quds al Arabi reports, a Moroccan anti-Israel group is upset. The "Moroccan National Working Group in Support of Palestine and Iraq" announced "that the participation of Yael Naim coincides with the escalation of Zionist crimes, with its racial terrorism and its determination to defy the international community, as well as its occupation of the remainder of the land in the West Bank and Jerusalem...[who are on their way to becoming] to the most racist state ever, an exclusive Jewish state."

"The name of the music festival? The Concert for Tolerance."

Yet buried further down the Al-Quds al Arabi article is the news that Israel Arkia airlines and Royal Air Maroc have struck a deal to bring in Israeli holidaymakers on package tours to Morocco, starting this week.

Update: The concert with Yael Naim apparently went well, but officials were stunned to see this at the Agadir Judo Championships on 22 October - and demanded that the Israeli flag be taken down. Read Elder of Zion's post in full: 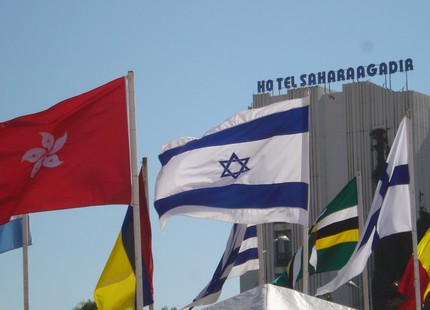 "Moroccan National Working Group in Support of Palestine and Iraq"

But not in support of the Western Sahara or the movement against the Spanish occupation of Ceuta and Melilla (which are two Spanish enclaves in Morocco since the 16th century).

Members of that group were on the Mavi Marmara (no one killed or injured).

As to the deal Arkia-Royal Air Maroc, Turkey's loss is Morocco's gain. One of the routes used to be Turkish Airlines-Alitalia. Apparently, thpose tours can't go through Turkey anymore.

That Agadir Festival is a big event. What a shame. A country that has no oil, no gaz and still tries to better the lives of its citizens with tourism and new technologies. These people hate Israel more than they care about their own. Or is it that they love the Palestinians more than they love their children?

mmm..interesting! I think the tourists will be coming through Barcelona.
Of course this Moroccan Group are only interested in supporting anything anti-Israel or anti-western.

Actually, Israel has just made a couple of oil and natural gas discoveries.

Heather
I am talking about Morocco that has no oil and natural gas. The Agadir festival is in Morocco.

OT
it's in German but I gather Google translate will manage

there was a German MP delegation in Iran and part of the program was a visit to a Jewish community. Luc Jochimsen, the one who had the program online, is a member of Die Linke, the same party that had 2 MPs and one former MP on the Mavi Marmara.

the program is no longer online but if Broder says it was, then I believe it.

Silke
If you come across an account by any of these German MPs of their impressions of the Jewish community in Iran, please let me now!
Thanks.