Tunisian star banned for singing in a synagogue

The popular Tunisian singer Saleem Bakkoush has been forced to cancel a concert at the annual Carthage festival, after a video surfaced showing him performing at a synagogue.

Mr Bakkoush accused his rivals of publishing the tape to tarnish his reputation.

Tunisia is one of only two Arab states with a sizeable Jewish community (sizeable? Not more than 2,000 Jews remain out of a community of 100,000 - ed).

But pro-Palestinian sentiments remain strong and the country has no diplomatic ties with Israel.

This was supposed to be Mr Bakkoush's first appearance on the prestigious Carthage festival.

But the sudden emergence of the tape showing him performing at the country's oldest synagogue in Djerba has scuppered this unique opportunity. 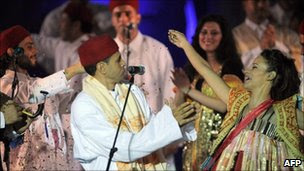 Mr Bakkoush said the recording was a few years old and suggested that his enemies had published it now to prevent the concert.

Anti-Israeli sentiment in Tunisia - especially in cultural and artistic circles - was already running high following the emergence of another remarkable tape.

It showed another popular singer, Mohsen El Sharif, performing at the wedding of a Jewish couple of Tunisian origin in Israel.

What angered people most in Tunisia was Mr El Sharif's readiness to please the Israeli public by shouting "Long Live Netanyahu", referring to the Israeli prime minister.

He later tried to defend his action by saying that he thought that was the bridegroom's name.

Few believed him, and his critics have launched an internet-based campaign to have him put on trial and stripped of his nationality.

*It's not the first time Abdelhadi has confused pro-Palestinian sentiment with Arab antisemitism and downplayed the plight of Jews from Arab lands. See Biased-BBC post Same mistake

*See Imagine if on NotaSheep blog

Email ThisBlogThis!Share to TwitterShare to FacebookShare to Pinterest
Labels: Israel/Tunisia

I emailed MAH last night to ask why his article was framed purely in terms of the anti-Israel, rather than also the anti-semitic, nature of the incident (since the guy sang in a shul not at an Israeli embassy). I also asked why he mentioned at the end that most Jews "left" the Arab world decades ago, since we both knew that most of them were forced out or fled for their lives.

Disappointingly, he responded to say that in the Arab world the two issues are conflated (which didn't explain why he did the same); that you can't talk in terms of European antisemitism in the Arab (I'm not sure I agree with this, but it's irrelevant - I just wanted some recognition that there was an antisemitic element to this); and that while some jews fled, others left and anyway, that wasn't relevant to the article (even though the article is about anti-jewish prejudice in the Arab world today - an obvious link one would have thought).

I found his response - particularly around the extent and nature of Arab antisemitism - deeply disappointing, given his role at the BBC and the previous censure from the BBC's ECU following his report on the Refugee conference last year which ploughed basically the same furrow - life not so bad for Jews in the Arab world, no serious mention of antisemitism, all about Israel not Jews.

It was indeed Magdi Abdelhadi who was censured by the BBC's ECU for saying that Jews were 'well integrated' into Arab lands when historically they were constrained as dhimmis
http://hurryupharry.org/2009/01/24/bbc-ecu-ruling-life-not-hunky-dory-for-jews-in-arab-countries-after-all/
It is clear as day that this instance of the singer being banned is driven by pure (Arab) antisemitism, as you rightly argue, Anon, but MAH continues to fudge and dodge the question.
Following the London Jewish Refugees conference in 2008, the BBC promised to do more on the subject, but we are still waiting. Meanwhile the articles on the Palestinian Nakba continue to pour forth from the BBC, without the slightest attempt at balance.

I have submitted a complaint using the online form for good measure, fat load of good that will do. In many years of complaining to the BBC, never have I seen such a forthright statement of views from a senior editor. Keep up your good work.

I'm glad you've done that, and hopefully others will complain too. I'm going to see if Biased BBC can do something.