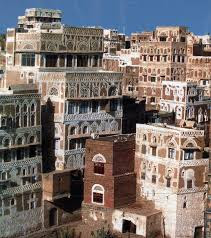 View of Sana'a, the capital of Yemen

This Yemen Post article reveals how Muslims in Yemen used to treat Jews before their great migration: they wanted to keep them apart, easily distinguishable, locked up in their ghetto, and in a state of 'psychological instability'. Jews were reminded of their inferiority every time they entered their own low-built homes. Some were not allowed to leave for Israel until they had taught Muslims their skills.

The story started more than 80 years ago when Imam Yahya Hamid Al-Dean decided to keep Jews out of the old city of Sana’a for the reason that they were very famous for selling alcohol.
To keep Yemenis cautious from Jews and to distinguish them from Muslims, Imam Yahya also had them keep their hair in a special way, where two locks of hair would come down the side of their face. (...)

(Ga’a Al-Yahood) was a famous neighborhood in Sana’a where Imam Yahya had most Jews live. It had two gates: Al-Boonia Gate and Al-Shebh Gate. The Jewish neighborhood was divided into many zones. In every zone there was a synagogue. After the Jewish migration, this neighborhood became a market for Yemeni people, but until today it still conserves all signs of Jews' lives. Signs of the Jewish society that remain include old shops, special decorated windows, narrow alleys, and its two gates.

Ali Salem, a resident in this neighborhood today said that there was a bodyguard room in front of Al-Shebh gate to watch people as they come and leave the neighborhood. This was aimed to not allow Jews and Muslims to mix a lot in order for customs of both religions not to change.

Hobshosh was a rich Jewish leader who owned the Hobshosh Palace. He owned gold and silver shops, but after he died his grandchildren sold the palace to a Yemeni official as they migrated to Jerusalem. The palace is now worth about 140 million rials, ($600,000) said Mohammed Al-Samni, a resident in the neighborhood.

The most important features in Jewish houses are the small size of the outer doors. The reason for them being small is to make people bow when they enter Jewish houses.

Jews usually built their homes without coordination or plan, because of the psychological instability (my emphasis - ed) and living conditions. Imam Yahya ordered that their houses do not exceed two floors.

Jews had many occupations in Yemen such as handicraftsmen, workings in blacksmithing, gold and silver, as they also worked in trade and agriculture. The Imam ordered Jews to teach Muslims those occupations so that Muslims can benefit from them.

Read article in full
Posted by bataween at Sunday, August 15, 2010

Just came from a demo to support an Israeli store in London.

The national socialists and their muslime friends all had banners and badges calling Israel an apartheid state when the truth is the complete opposite!

Israel is looking a lot like Germany after the War with elements of apartheid. Not a good look. I love the idea of a Jewish state but for peaceful resolution more Arab Jews' voices need to be heard. Where are the Shephardic, Bukharian, Iraqi, and Yemeni Jews? Speak Up.

Not at all. Israel is more of a melting point than ever, with Jews from East and West intermarrying more and more. The Jews of the East don't represent sectarian communities anymore: as the leader of the Libyan Jewish association told Gaddafi when he asked them to form a Libyan party in the Israeli parliament - we are all one people.

Incredibly interesting — I'm doing some research about old Jewish history in Yemen myself. I was intrigued by the idea that they wouldn't be allowed to leave until they passed on their skills (which would go along with the Yahya's forbidding them from leaving). What's your source for that bit?