Yosef (not his real name), who escaped Iran to become a decorated combat soldier for the Israel Defence Forces, tells his remarkable story. His first few days were haunted by nightmares that he was being pursued by the Iranian Revolutionary Guard. Feature in Ynet News, The Persian prince:

About three months ago, Major-General Sami Turgeman, commander of the Israel Defense Forces' ground forces, delivered a motivational speech to cadets at the Bahad 1 officer's training base in southern Israel.

Turning to one of the cadets, Turgeman said, "Stand up, introduce yourself and tell us why you want to become an officer." The cadet's story left the general flabbergasted. A month later, when the course ended, Turgeman even awarded him the battalion's medal of excellence. Many details of Yosef's (not his real name) story remain confidential for security reasons and out of concern for his own personal safety. His family still lives in Iran, from which he immigrated to Israel to serve in the IDF.

A short time after arriving in Israel, Yosef was already fighting in Gaza as part of Operation Cast Lead.

Even as a child, Yosef felt out of place in Iran. "I was born to a religious Jewish family, and we lived in a Jewish community. You can live in Iran as a Jew, but not as a Zionist," he explains. "You have to be careful not to anger the extremists."

Yosef went to school with Muslim children. "Following the revolution of 1979, the Iranian authorities banned studies in the Jewish community's school. Everyone had to enroll in Muslim schools. On Friday, our only day off, we studied at the Jewish school."

Did you have any friends at the Muslim school? "I did, but we were not particularly close. For example, I did not visit their homes, because had I visited their homes and they would have offered me something to eat, I would not have been able to put anything in my mouth because of kashrut issues. There were other things that made me uncomfortable. For example, before meals (at school), the children would ask me 'why did you wash your hands (referring to the Jewish ritual of Netilat Yadayim)'? Some would not even sit next to me during the meals.

"I asked my parents once, 'Why are we here? There is a Jewish state - the State of Israel'. After the revolution my parents understood it was time to leave Iran. But they did not know exactly when. I asked them, 'Why are we treated differently? Why do they want us to pray in Arabic? Why am I asked whether I plan on converting to Islam?' There were many mean children. Some of them attacked me and broke my finger. In another incident I was stabbed with a knife. When anti-Israel demonstrations were held in Iran, I could not leave the house. Even though our financial situation was good and we lacked nothing, I did not want to be there." 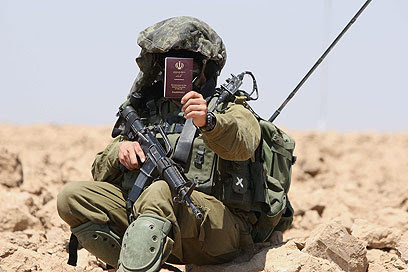 The synagogue was a refuge for Yosef and many of his friends. "It wasn't just a place to pray; it was like a youth center, where we met friends, studied and watched movies," he says. "The members of the community were very close – like family. Many of the children shared my feelings – they did not want to stay in Iran. We started first grade with dozens of children, and by 12th grade there were less than 10. The rest moved to the US and Israel."

When he was 16, Yosef decided to try and leave Iran. He told no one of his plan. "I had some money saved up from my bar-mitzvah and from computer lessons I would give. I kept the money hidden in my shoes and packed a large bag containing all of my belongings. On Purim, it was customary for Jews to visit the gravesites of Esther and Mordechai in the city of Susa (or Shushan), so I told my parents I was going there," he says.

"I asked a truck driver to smuggle me across the border. I took two flights to meet him, but I was a half-hour late and he drove away without me. It was also the Iranian New Year, so the border I had planned on crossing was closed for 13 days. I was forced to go back home."

But the stark reality in Iran, including the arrest of 11 Jews on suspicions of "spying for Israel," increased his desire to come to the Land of Israel. "Some of them (the detained Jews) were my teachers. Innocent people. There is no way they were spies. They had no idea what a computer was. In Iran, killing people is like having a cup of coffee. Had they really been spies, they would have been executed, not released after a few years. When they were arrested, I began teaching in their stead. I taught Bible, Zionism and current Israeli events, which I linked to the Land of Israel of 2,000 years ago. I kept explaining to my students why it is important for Jews to live in Israel. I gave these lessons in secret, or else I would have been arrested immediately," he says.

Yosef's fears intensified as the end of his studies drew near. "At 18 everyone has to enlist in the Iranian army. Those who don’t enlist do not get a passport, are forbidden from getting married, cannot apply for a driver's license, cannot purchase a car or buy an apartment, nothing. For Jews the issue of enlistment is very difficult. Apart from the problem of kashrut, which of course is not kept in the army, no one wants to join an army that is an enemy of Israel. I dreamed of serving in the IDF."

In an effort to dodge the draft, Yosef approached a man who promised him an exemption in exchange for money. "I paid him a $3,000 bribe. That's three million in Iranian currency. It's a huge gamble. Very frightening. I gave him money and all my personal information. I was afraid he would turn me in to the authorities, but he gave me the exemption certificate. I went to the Interior Ministry to apply for a passport. I was told that if the exemption certificate was authentic I would be given a passport, and if not I would be arrested. I sat at home, anticipating my arrest. Two weeks later I went to the post office – my passport was waiting for me there."

Using a satellite dish, Yosef was able to follow the daily events in Israel on television. "When Gush Katif was evacuated, I could not understand what all the fighting was about. I saw Jews crying, and IDF soldiers. I did not understand why they were crying – why this evacuation was taking place. I would watch it every evening and go to bed sad." Yosef was also able to follow the Second Lebanon War on Israeli TV. "Iranian television said Hezbollah destroyed more than 1,000 Israeli tanks, but I heard that Israel did not use that many tanks and realized that the Iranian media outlets were lying," he says.

According to Yosef, Iran is technologically advanced. "Iran gets the most modern things from Dubai. People tend to think that Iran is like Gaza, but this is far from the truth. I saw Gaza up close during Operation Cast Lead, and it is very different from Iran. I say this regretfully, because (Iran) is our enemy."

Yosef managed to stay in touch with family and friends in Israel. "One of my relatives fled from Iran to Israel after the revolution. He would call once a year, and we would converse over the Internet. I would speak to friends who left Iran for Israel only on public phones because I was convinced Iranian intelligence wire-tapped phones in Jewish homes."

Yosef says his friends in Israel contacted the Jewish Agency, which helped plan out his escape to Israel. "I bought a plane ticket to another Arab country, as though I were going on a trip. The most important thing was to keep everything secret. That was the most difficult part – not being able to say goodbye to my parents and friends. My parents assumed I would leave one day, but they were not prepared for it. I surprised them."

"At the airport, the passport control officer looked at me with suspicion. 'Jew?' he asked. I answered 'yes'. 'Were you in the army?' I said I wasn't, and prepared to present the exemption certificate, but then he stamped the passport with a forcefulness that shook me."

Jewish Agency representatives greeted Yosef upon his arrival at the Arab country. "I spent the night in a hotel, at the agency's expense, and we flew to Israel the following day."

Are you in touch with your family in Iran? "They call me about once a month, from a public phone." Yosef initially lived in a Jerusalem absorption center. "All our lives we prayed that someday we would make it to the holy city. For me, living in Jerusalem was a dream come true. They gave me a room in the Armon Hanatziv neighborhood, a half-hour walk from the Western Wall. I would pray there every day."

Yosef's first few days in Israel were accompanied by nightmares. "Every night I would dream that members of the (Iranian) Revolutionary Guard are chasing me and shooting me. When they shot me in the dream, I felt the bullets penetrate my body; I felt actual physical pain, which woke me up."At some point I purchased a huge Israeli flag and hung it opposite my bed. When I would awake from the nightmares and see the flag, it calmed me down. I knew I was here in Israel and they could not hurt me," he recalls.