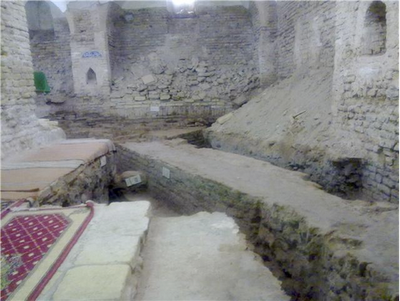 Just when we all thought that the Jewish character of the shrine of Ezekiel was safe, news reaches Point of No Return that the ancient tomb of the Biblical prophet at al-Kifl, south of Baghdad, is still the object of controversy.

According to a source who visited the site recently to take pictures, the Jewish character of the tomb has been damaged and the shrine is in a state of neglect. In the picture above, you can see that one of the outlying rooms, in which Jewish sages and prominent figures are buried, has been stripped to its bare brickwork. The visitor had organised an independent TV crew to film the tomb, but was told the crew could photograph every Jewish holy site except Ezekiel's. The shrine is being used as a mosque and the religious authorities, who still want a free hand to treat the site as a Shi'a shrine, accuse certain individuals in Israel of stirring up trouble and damaging their reputation.

Against the background of this disturbing news comes this article in the Iraqi newspaper al-Nahrain, containing a robust warning by the Antiquities Authority to the religious authorities to stop meddling in the future of the shrine.

The article says that the shrine at al-Kifl has been the subject of controversy since 2003. Iraqi institutions such the Antiquities Authority, headed by the Relics inspectorate, want exclusive control over the preservation and restoration of the site, while the Shi'a Muslim authorities want to determine its (Islamic) 'religious identity.' Secular interests are exploiting the issue to snipe at the religious.

A conflict also going on between Jews and Muslims. Iraq's ambassador to Washington, embroiled in a further controversy over the return of Jewish archives to Iraq, has called media reports 'false' that the shrine's Jewish character has been damaged. The prophet Ezekiel is revered by both faiths and until their exodus some 60 years ago Jews owned property (now frozen) and farmland in the surrounding area.

The article describes the historical struggle for control over the shrine.

The Chairman of the Committee on Culture, Media and Tourism and the Antiquities Council for the province of Babylon told al-Nahrain:

"The shrine of Ezekiel is an Iraqi heritage site which must be dealt with according to Iraqi law. We reject attempts to drag al-Kifl into the arena of conflict and religious strife."

He slammed the Shi'ite authorities for their interference. "To give them this authority is an act contrary to the Constitution. Religious authority is always keen to highlight symbols at the expense of other symbols and this violates the rules of the Antiquities Authority and its laws."

The Chairman wanted to see the Kifl opened to international tourism. "To resolve outstanding problems needs legal clarity and also clearly needs to define the remit of clashing authorities whether inside or outside Iraq." 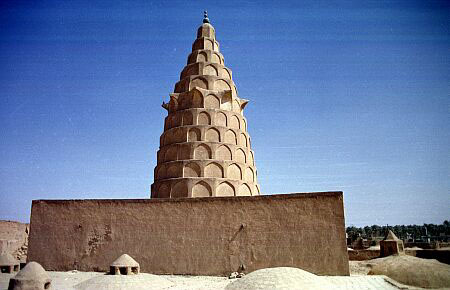 Please sign Point of No Return's petition deploring the Shi'a authorities attempts to 'islamise' the shrine of Ezekiel and calling for the site to be placed under the ultimate authority of UNESCO.

Lachish Reliefs (made around 700 BC). Stone panel, found in northern Iraq

Hi, do you mind if I cross-post?

I've checked it
- Google translate gives an accurate picture of the incredibly rude behaviour of two Turkish? girls buying something in Paris in a Maroccan Jew's shop.

Stuart
No objection at all, but bear in mind I might still need to modify the text.
Silke
What badly-behaved girls. How dare they bully the Moroccan shopkeeper like that? His response is classic 'dhimmi'- we lived together like brothers, that's why I now live in Paris, folks.
The Lachish item is really interesting, reminds me of the Bayeux tapestry telling the story of the defeat of the English, or the Arch of Titus showing the Romans carrying off the Judeans' booty

bataween
I woldn't call the shopkeeper's initial response dhimmi -
he reacts like any salesman reacts to customers, tell them what they want to hear (after all it doesn't say for which reason he has his shop in Paris, maybe it's just because business is better)
-
actually he departs from that iron rule of service supplying people to an extent which hopefully one of these days, if the girls should decide to become responsible adults, will make them utterly ashamed of themselves.
Silke

Silke
Or maybe it would have taken too long to explain why only one percent of 'brown' Jews still live in Morocco and challenge these ignorant girls' preconceptions about 'white' Israelis
http://www.jpost.com/Features/InThespotlight/Article.aspx?id=174196
But Moroccan Jews are know for their passionate support of Israel and found he just couldn't help himself

I'll wait until you are happy with the text?

Stuart,
sure - I'm waiting for feedback from Arabic-speakers and will let you know ASAP. Thanks for your patience!

this question of brown and white strikes me always as especially ridiculous as I and almost all the whites I have ever met, regularly spend a fortune to become as brown as possible ;-)

seriously, dealing freely with eachother becomes extremely difficult, once one or both of the two have suffered from discriminiation. I once had a fight with a colleague from Spain begging her in all innocence to come with me because I wanted to show her something wrong with a machine she was in charge of. She was deeply offended concluding that I did it, because I thought her German was not up to scratch and it took quite a while and quite some explaining to make her accept that I did it because my abilities to put threedimensional stuff into words is minimal to non-existent, which she found unbelievable because she perceived me as very good with words.

BTW I greatly admired her for her superb organising skills, but in the shadow of her boss who regularly quipped about her minor German slips that became kind of not credible and so she categorized me as superior also while I categorized myself as even albeit with different specialities.

By which I want to say, we must call out anybody who makes us feel small but also give him/her the benefit of the doubt.

have a nice shabbat or weekend

You're so right! Shabbat shalom
bataween

Sorry if these is a trivial question but when you say the site has been stripped all the way to the brickwork, what is it specifically that was removed and when?

One cannot say for certain what was removed and when, but if you look at this picture you will see
decorative plasterwork overlaying the brickwork
http://3.bp.blogspot.com/_Gu3-w5uvB_o/S-mTqII346I/AAAAAAAAAOQ/2Zab9Sicago/s1600/052.JPG