'We will return the crown to its original owners' 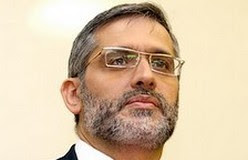 Lashing out at discrimination in secular society, Shas party chairman Eli Yishai is prepared to take his children out of their Ashkenazi schools and enrol them in Sephardi schools. The way forward, following the Emmanuel haredi debacle, is to establish more such schools, the Jerusalem Post reports:

With mounting criticism from within his electorate over his party’s indecisive intervention in the Emmanuel affair, Shas chairman Eli Yishai launched an offensive at Israel’s secular society, claiming it is plagued by racism far worse than that in the haredi sector. He also reiterated that the true solution to discrimination is by creating alternative Sepharadi frameworks.

“The true facts should be stated, once and for all… only one Sepharadi justice presides in the Supreme Court among 14 Ashkenazi justices… 12 prime ministers led Israel since the state’s founding, not one of the Sepharadi… of the 19 IDF chiefs-of-staff only six were Sepharadi, and the list goes on,” Yishai said in an interview with Yom Leyom, the official Shas weekly newspaper. Yishai also pointedly noted the income and educational attainment gaps between ethnic groups, which exhibit the disadvantaged status of the Sepharadi sector.

Yishai also toned down the rhetoric against Yoav Laloum, who had filed the original petition against the segregated school and was recently doomed by Shas spiritual leader Rabbi Ovadia Yosef to lose his place in the afterlife for his actions. While Yishai reiterated the party line of not turning to secular courts, as he stressed in Sunday’s faction meeting, he managed to accredit Laloum as having“good intentions,” even if the results of a court petition were counterproductive.

“The true and correct solution to eradicating discrimination is by establishing religious Sepharadi educational institutions,” and not in court battles, Yishai stressed in the interview. “This is one of the reasons Shas was founded.”

Yishai took the opportunity to set the track straight on his movement’s involvement in the Emmanuel segregation, telling Yom Leyom it was Shas that first acted to provide a solution to the Sepharadi girls who were cast out by the separation there.

"Two-and-a-half years ago [Religious Services Minister] Yaakov Mergi toured Emmanuel, and was shocked at what he saw in the school. Following that, we had an extensive meeting and decided to found a Sepharadi school, so that those girls wouldn’t feel discriminated, despite the financial losses the school garners, due to the small number of constituents it serves. Today, it is one of the best schools we have.”

Much criticism has been leveled at Yishai personally, since he, like other prominent Sepharadi haredim, sends his children to Ashkenazi schools. Yishai had explained that he didn’t want to fight his battles on his children’s account, who would have to take a bus to Sepharadi institutions rather than walk to the close-by Ashkenazi school. Now it seems as though his children should get used to the idea of changing a school next year.

“I say this to myself and my friends – it is time for all the Sepharadi men [committed to Torah] enroll their daughters to Sepharadi schools and seminars, which is how we will return the crown to its original owners,” he said.

The growing volume of Yishai’s response to the criticism that he and his party didn’t do enough on Emmanuel might be in part due to the growing presence of former Shas leader Aryeh Deri in the public discourse over the affair, though Yishai said he is not concerned by the possibility of Deri leading an alternative party to Shas.

Jerusalem Post: neither ethnic nor prejudice (with thanks: Frank)