Refugees: BBC learns nothing and forgets nothing 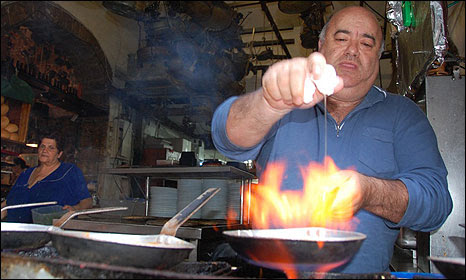 The BBC has learned nothing and forgotten nothing when it comes to refugees of the Arab-Israeli conflict: one side's narrative is relentlessly plugged, while the other side's is ignored. 'Fakery and propaganda' is CAMERA 's verdict on the BBC's Middle East coverage at the time of Israel Independence Day:

The remains of the Arab village of Lifta on the outskirts of Jerusalem. The inhabitants left in 1948. They were some of the 700,000 Palestinians for whom Israel's birth meant dispossession. There are deserted Arab villages like this dotted all over Israel. The Palestinians insist on the right of those who fled and their descendants to come back. The Israelis fear that – that would mean the end of their country as a Jewish state. And so, the so-called “right of return” is one of the seemingly insoluble issues of the peace process.

But the BBC is deceptively omitting relevant facts concerning Palestinian Arab refugees and the forgotten Jewish refugees. The comprehensive CAMERA article, Palestinian Arab and Jewish Refugees, citing authoritative source material, shows that in the wake of Israel's War of Independence in 1948, the overwhelming majority of Palestinian refugees were not expelled by the Israelis. But a much larger number of refugees, Jewish refugees who had resided in Arab countries for many generations, were forced to flee their native lands. (...)

Between 1948 and 1951, as a result of the War of Independence, about 400,000 Jewish refugees were absorbed by Israel after being driven from their homes from Arab lands. In total, well over 800,000 Jews indigenous to Arab and Muslim countries lost their homes and property following Israel's independence, roughly 600,000 of whom found refuge in Israel. Although the number of Jewish refugees and the total area of their lost land exceeded that of their Arab counterparts, the vaguely similar number of Jewish and Arab refugees has led some to describe the exodus of the two groups as a de facto population transfer.

Arab Refugees Have Been Invited to Return: In an essay published in Commentary in May 2001, Ephraim Karsh discussed Israel's policy on Arab refugees: In 1949, Israel offered to take back 100,000 Palestinian refugees; the Arab states refused. Nevertheless, some 50,000 refugees have returned over the decades under the terms of Israel's family reunification program, and another 75,000 who were displaced from the West Bank and Gaza in the 1967 war have also returned to those territories.

Correspondent Wood Takes Viewers on a Walking Tour Ending at a Villa in Jerusalem:
WOOD: For Claudette Habesch, 1948 is a year of painful memories. Her family fled this house in Jerusalem when she was a little girl and then lost ownership.
HABESCH: They did not leave by free will. We had two bombs here. My father had to take us out from here for security, for physical security. I wondered very often, who is sleeping in my bed? Who is playing with my dog?
WOOD: Her childhood friend, a Jewish woman (Ruthie), still lives next door.
RUTHIE: My parents rented this little house here from her parents.
HABESCH: This is my home and I go out as a stranger? Why? I need somebody to explain to me.

My comment: For every Claudette Habesch, there is a Jew forced to leave his or her home in an Arab country. And while the Habesches were fleeing a war situation, many Jews were escaping a hostile social and political climate which threatened them as Jews. But where are the BBC stories about them? Why are we not shown Naim Kattan visiting his childhood home in Baghdad, or the BBC accompanying Lucette Lagnado back to the apartment she grew up in in Cairo? The BBC is already in breach of an undertaking it made in 2008 to commission more pieces on Jewish refugees.

*The May entry for BBC Middle East correspondent Tim Franks' swansong diary is another example of the BBC's knee-jerk juxtaposing of Israel independence celebrations with the Palestinian Nakba. Nahla Assali moved all of two kilometres from West Jerusalem to East, but Jews uprooted from their homes in Arab countries and transplanted many hundreds of miles into a new country with a different culture and language are nowhere to be seen. A non-biased approach would balance the Arab Nakba with the Jewish Nakba. Ironically enough, the following entry of Tim Franks' diary profiles the colourful restauranteur Dr Shakshuka. Yet Franks calls him a 'Libyan emigre'. Would the BBC ever describe Dr Shakshuka as a Jewish refugee? Not on your life.

It is commonly forgotten or suppresed, that the first refugees of the 1947-1949 war who could not go home afterward were the Jews of the Shimon haTsadiq quarter in Jerusalem. Jews in south Tel Aviv were also driven out of their homes in December 1947 but could go home afterward because Jewish forces had defeated the Arab and pro-Arab allied forces in Jaffa.