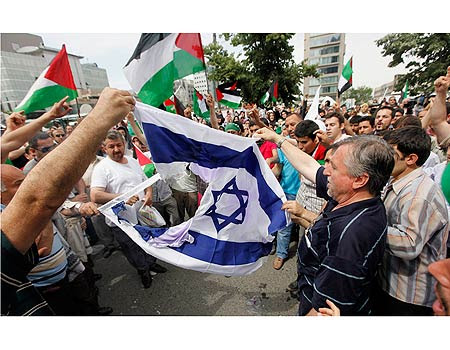 A Turkish newspaper editor told the European Jewish Press on Wednesday that Turkey's Jewish community feared that the backlash over Israel's interception of aid ships headed for Gaza earlier this week would provoke antisemitism, according to Haaretz :

On Monday, Israeli navy commandos clashed with activists aboard a Turkish ship carrying aid to the blockaded Gaza. The clash resulted in the deaths of 9 activists as well as dozens of injuries, among activists and soldiers alike.

The editor of the Istanbul-based weekly Salom, Ivo Molinas, said Wednesday that "we are definitely worried, because [the anger in Turkey] can turn very easily to anti-Semitism."

"The rhetoric used by the Prime Minister [Recep Tayyip Erdogan] has been very radical," added Molinas, part of the 20,000-member Jewish community residing in Turkey.

Erdogan accused Israel at the Turkish parliament on Tuesday of a "bloody massacre" and declared "now Israel has shown to all the world how well it knows how to kill."

Turkey has recalled its ambassador and Erdogan, charging Israel with "state terrorism", has called for those responsible for the deaths to be punished.

Other activists, who have given harrowing accounts of their ordeal on the high seas, arrived in Istanbul on Thursday to a hero's welcome by thousands of cheering supporters.

"But the Prime Minister also said yesterday [Tuesday] that he was against anti-Semitism. He says it during each crisis but he repeated it yesterday," said Molinas, whose newspaper has a circulation of around 5,000.

dear Point of no return:

Increasing anti-semitism? it has always been there. You get to know the look as you walk down the street. I know I have not got jobs I was well qualified for because of being Jewish, in the 21st century. It has become more overt now because it is more acceptable.

I just return the look with daggers too! they are like wild animals(only not as nice) if they sense weakness they will go for you. But I find in UK at least, the police are responsive if you feel threatened.

Point taken Juni, but I think there is a distinction between antisemitic prejudice on a personal level and state-sponsored antisemitism. Erdogan's orchestrated incitement comes very close to the latter. Of course, much depends on how far the police are prepared to protect Turkish Jews. In Arab countries, Jews understood that they were no longer welcome when the police mysteriously failed to show up when Jews were being attacked.

Of course. In fact Turkish Jews will be faced soon with 2 options: expulsion or legal dhimmi status. What do you think 'extra protection' always devolves into?

You only have to look back on the recent history of the Turkish Jewish community to realise that they are already thoroughly dhimmified
http://jewishrefugees.blogspot.com/2009/10/is-it-all-over-for-jews-of-turkey.html

Around 2001 or so, I was hoping to have enough money to visit "the old country." So much for sentiment; not anymore. Nowadays, I'm just thankful that my grandfather got on the boat.

They can't say it wasn't expected.

Both Israel and the diaspora should help Turkish, Iranian, and Moroccan Jews to get out, as soon as possible.