Tangiers 'community' resides in the cemetery 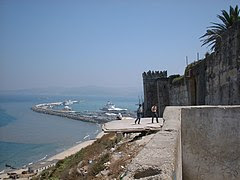 View over the Mediterranean from Tangiers

Gem of an article by the celebrated columnist Mark Steyn in Macleans: Steyn was shocked to discover that, contrary to assurances received, the graves in the Jewish cemetery of Tangiers were unkempt and being used to dry someone's underwear. It is not unusual for the Jewish 'community' of places like Tangiers to reside in the cemetery, he argues - a fate which jihadists (and Helen Thomas) wish eventually to reserve for Tel Aviv.

Thanks to the wonders of globalization, I’m writing this in a fairly decrepit salon de thé off the rue de la Liberté in Tangiers, enjoying a coffee and a stale croissant grilled and flattened into a panini. What could be more authentically Moroccan? For some reason, the napkins are emblazoned with “Gracias por su visita.”

Through a blizzard of flies, I can just about make out the plasma TV up in the corner on which Jimmy Carter, dubbed into Arabic, is denouncing Israel. Al Jazeera doesn’t so much cover the Zionist Entity as feast on it, hour after hour, without end. So here, at the western frontier of the Muslim world (if you don’t include Yorkshire), the only news that matters is from a tiny strip of land barely wider at its narrowest point than a rural Canadian township way down the other end of the Mediterranean.

Notwithstanding saturation coverage of the “Massacre In The Med” (as the front page headline in Britain’s Daily Mirror put it), there are other Jewish stories in the news. This one caught my eye in Canada’s Shalom Life: “No danger to the Jewish cemeteries in Tangiers.” Apparently, the old Jewish hospital in this ancient port city was torn down a couple of months back, and the Moroccan Jewish diaspora back in Toronto worried that their graveyards might be next on the list. Not to worry, Abraham Azancot assured Shalom Life readers. The Jewish cemetery on the rue du Portugal is perfectly safe. “Its sanctity has consistently been respected by the local government that is actually providing the community with resources to assist in its current grooming.”

Sounds great. Being in the neighbourhood, I thought I’d swing by and check out the “current grooming.” It’s kind of hard to spot unless you’re consciously looking for it: two solid black metal gates off a steep, narrow street where the rue du Portugal crosses the rue Salah Dine, and only the smallest of signs to indicate what lies behind. On pushing open the gate and squeezing through, I was greeted by a pair of long underwear, flapping in the breeze. In Haiti, this would be some voodoo ritual, alerting one to go no further. But in Tangiers it was merely wash day, and laundry lines dangled over the nearest graves. If you happen to be Ysaac Benzaquen (died 1921) or Samuel Maman (died 1925), it is your lot to spend eternity with the groundskeeper’s long johns. Pace Mr. Azancot, there is no sense of “sanctity” or “community”: as the underwear advertises, this is no longer a public place, merely a backyard that happens to have a ton of gravestones in it. I use the term “groundskeeper” but keeping the grounds doesn’t seem to be a priority: another row of graves was propping up piles of logs he was busy chopping out of hefty tree trunks. Beyond that, chickens roamed amidst burial plots strewn with garbage bags, dozens of old shoes, and hundreds of broken bottles.

It’s prime real estate, with a magnificent view of the Mediterranean, if you don’t mind the trash and the stench and the chickenshit, and you tiptoe cautiously around the broken glass. I wandered past the graves: Jacob Cohen, Samuel J. Cohen, Samuel M. Cohen . . . Lot of Cohens here over the years. Not anymore. In one isolated corner, six young men—des musulmans, naturellement—watched a seventh lightly scrub a tombstone, as part of a make-work project “providing the community with resources to assist in its current grooming.”

What “community”? By 2005, there were fewer than 150 Jews in Tangiers, almost all of them very old. By 2015, it is estimated that there will be precisely none. Whenever I mention such statistics to people, the reaction is a shrug: why would Jews live in Morocco anyway? But in 1945 there were some 300,000 in this country. Today some 3,000 Jews remain—i.e., about one per cent of what was once a large and significant population. That would be an unusual demographic reconfiguration in most countries: imagine if Canada’s francophone population or Inuit population were today one per cent of what it was in 1945. But it’s not unusual for Jews. (My emphasis - ed).There are cemeteries like that on the rue du Portugal all over the world, places where once were Jews and now are none. I mentioned only last week that in the twenties, Baghdad was 40 per cent Jewish. But you could just as easily cite Czernowitz in the Bukovina, now part of Ukraine. “There is not a shop that has not a Jewish name painted above its windows,” wrote Sir Sacheverell Sitwell, visiting the city in 1937. Not today. As in Tangiers, the “community” resides in the cemetery.

Wow, one has to get up pretty early in the morning to tip you :).

thanks for the thought Heather - don't forget I am on GMT!

Moroccan government and the royal families and their following rely heavily on tourism dollars. In fact, it has been and still is the back bone of an ailing economy from which very few moroccan benefit if not to pay the civil servants and governmental employees. Phosphates which are the primary resources the moroccan economy relies on for hard currency have fallen in price and investement. They have been replaced by an all out march toward making any piece of land a 4 or five stars hotel for foreigners (among them Israelis) to savour the delight of what was once jewish lands and sunshine.

Tangiers is a primarly example for this crazy drive toward making morocco a contry like Las Vegas or the new desert Hollywood in order to keep either the economy afloat and breathing or to sustain the high consumption of the royal families and their elites. All this is driven by crony capitalism under the protection of an extended economic/ tribal alliances. No wonder Benchimol hospital was razed to the ground. It is a prime real estate at the edge of the both the atlantic ocean and the mediterranean sea, a trully Herculenean view.

The cemetery would finally succumb to his tourism development greed or another mansion by some protected cronies of the royal family. And they wonder why there is rampand discontent among the youth who turn to fundamentalism and radical islam. Unless someone steps in and save the cemetary maybe by bribing some officials, it will be a done deal. Bribery, bakshich, rashoua the wheeling and dealing are the only mechanisms by which the bureaucratic machine is greased in Morocco.

Thanks for this informed analysis Sammish. The one saving grace in relying on tourism to bring in the hard currency is that an important component is Jewish tourism - not that cemeteries are nececessarily on the itinerary, but Jews may have more influence with the Moroccans than they think...

Unfortunately there seems to be a dispute in the Macleans comments about which cemetery is illustrating this article.

Yes. I was wondering about that myself. I am not sure why he used a picture of the Crakow cemetery when he was writing about the Tangiers one. It is confusing..

Agreed, but it was probably the subeditor at Macleans, not Steyn himself, who decided to use the misleading Krakow cemetery picture.