No praying? Restored synagogues are what counts 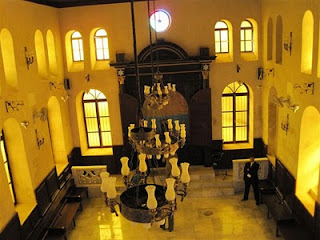 Zahi Hawas, who heads Egypt's Supreme Antiquities Authority, caused an outcry when he said Jews were forbidden from praying in the newly-restored Maimonides synagogue. Should we be outraged that basic rights are being denied and that the local community is being sidelined, or simply grateful that these synagogues are being restored - and at the expense of the Egyptian public purse? Yves Fedida of the Nebi Daniel Association puts his point of view:

"Further to Mr Hawass's statement, I think we would be better advised, when dealing with non-life-threatening matters, to look beyond the bombast prevalent in that part of the world and stick to the essentials.

"I respectfully point your readers to an alternative, more authoritative point of view in Egypt, as well as a new balance in reporting the event, which has struck me. Please look at the following links to two of Egypt's prominent newspapers: An open and shut case (weekly.ahram.org.eg-issue-990) and Jews of Egypt:a tale of love and cold shoulders (Al Masry- al Youm) .

"The fact of the matter is that all but one or two of the synagogues in Egypt are in a sort of National Trust. That gives power to the 'boss man'.

"So what is it we Jews really want ? Is it to make Mr Hawass swallow his words and humbly repent ? Or is it, rather, to encourage him to continue restoring the synagogues ?

"The first - if ever achievable - would produce a pyrrhic victory at best and put in question the rest of the restoration programme.

"The latter inexorably leads to historical recognition, acceptance and understanding ( and possibly even future prayer halls !) when all current leaders and would-be devotees are all long dead.

"Was the status quo ante preferable ? Broken, undignified ruins where no one would go, let alone pray ?

"The local community has certainly neither the strength nor the means to carry out restoration work and I have not seen a queue of volunteers from abroad with outstretched hands and or funds.

"So in spite of his remarks,when all is said and done, the restoration work is all that matters. We should have the grace to recognize and feign to ignore this. This sort of turgid talk has always been for local consumption.

"I humbly feel that this is what we should all be doing: ignoring the fake bravado, acknowledging the real crux - restoration of Jewish heritage in a hate-ridden Muslim land."

When Zahi Hawass says that he would not allow any Jew or Israeli to pray in the restored Maimonides Synagogue and HE WOULD NOT ALLOW THE EGYPTIAN JEWISH COMMUNITY TO ADMINISTER THE SITE, these are not REMARKS but DECLARATIONS. Taking away from the Jewish Community of Cairo their right to administer the site because of Chabad dancing and kiddush, or because of Israel's policy in Gaza - which Egypt is execrating - these are all pretexts to take over the Jewish Public Properties. We all know that Ben-Ezra Synagogue was restored not by Egyptian money, but with a million dollar Jewish donation from Phyllis Lambert, and under one Egyptian condition: that the Synagogue becomes Egyptian Property and no more prayers will take place in that Synagogue. This is a POLICY, not a PUNISHMENT. During the restoration, the name of ALLAH in Arabic was even inscribed on one of the chandeliers of the Ben-Ezra Synagogue.
As Zahi Hawass said, the next Synagogue to be restored is Nebi Daniel in Alexandria, and now we all know why.
I am not coming here to say that Synagogue restoration is bad, but we don't have to shut up. It is our minimal duty to react when the government of Egypt is nationalizing, one after the other, our Synagogues and cultural heritage and making of them bare Pyramids. Our reaction will not stop the Synagogue restoration, because this is a matter of Egyptian Tourist interest, but it is our duty to try at least stopping their full nationalization.
Levana

I just saw Zaki Hawass interviewed this morning on France24 in English. He is what we call a shvitser, full of boasting, egotistic, narcissistic. He claimed that other archeologists "are jealous of me."

With such a personality, I wonder about the safety of the synagogues and the ancient artifacts under his control.

Of course, the Jews of Egypt are in a dilemma. As Yves Fedida seems to be saying: These people running Egypt are fanatics on a short fuse, and their masses are more fanatic yet, but they hold all the cards. Now, if we could get some prominent individuals in Europe, the West, Latin America, to take up the cause, especially politicians in the US Congress or the French parliament, maybe the Euro parliament at Strasbourg [not the British parliament where even a humble request to Mubarak to recognize Jewish rights to their heritage would likely be met with angry screams from galloway and jenny tonge about Israeli war crimes, etc], a journalist like Melanie Philips, then there could be some restraint on the Egyptian officials. Historians, archeologists, writers [Bernard-Henri Levi, Claude Lanzmann and such], Jewish leaders, especially in the USA, could be all be helpful. But politicians --esp. prominent politicians, maybe Senator McCain, Joe Lieberman, Sarah Palin, -- are most important. Unfortunately, few outside of Egypt seem to care even about the regular, often deadly, persecution/discrimination against the Egyptian Copts. Would anybody care about the humiliation that Egyptian Jews feel over this policy of appropriating synagogues??

Maybe some Italian parliamentarians might be willing to make this a cause. After all, the Italians are concerned about matters of heritage preservation. Then Magdi Allam, a former Egyptian, is a prominent journalist there, and Fiamma Nirenstein is both a journalist and member of parliament [deputy chairwoman of the foreign affairs committee].
http://www.fiammanirenstein.com/articoli.asp?Categoria=11&Id=2345

The issue of the Tomb of Ezekiel could also be brought up, although I don't know if protests abroad could move the Iraqi govt, given the power of the Shi`a waqf.

This Arab attitude toward others' holy places and places of worship could be demonstrated by pointing out that a "human rights" group in Gaza called rebuilding the Hurva synagogue in the Old City of Jerusalem "a war crime" by Israel.
http://www.commentarymagazine.com/blogs/index.php/pollak/259906

How dare they deny any Jew from praying at this Synagogue? Please stop another attempt of antisemitism. Wasn't the Holocaust enough?
Thank you.

How dare they deny any Jew from praying at this Synagogue? Please stop another attempt of antisemitism. Wasn't the Holocaust enough?
Thank you.

All other synagogues but the existing 12 or 13 were sold by OUR OWN people, converted into warehouses, mosques and other niceties.
Only 3 are used on some high holidays when a minyan of occasional tourists can be gathered.

WE ALL requested that Egypt save the existing ones. This is EXACTLY what they have done and will continue to do.

By being put into National Trust ( which happened more than a decade ago ) Egypt is condemned to maintain them and keep them up. At this stage, it is any alternative behaviour on their part that would constitute the real offense.
The outcry against "successive nationalisation" is, with all due respect, a smoke screen. They have been under national trust--that is to say inalienable -- for sometime now.

As to the question of who administers them is concerned, we need to weigh our forces there
and ask ourselves whether this non-administration is really verified and even if it were what difference it would make. In this respect, having been there quite a few times, I believe the case of Ben Ezra is misrepresented in Levana's comments.

It is our hope that ex Jews from Egypt would finally get their act together in a proactive way to join in an association that would represent a credible successor in the eyes of the local government.

The reaction of Dr. Zaki Hawass and his latest pronouncements are unfortunately all too typical for Egypt officialdom.

They were all along wary of their local population mis-interpreting the government's intent of salvaging this historical Jewish site. They wanted it to be hush hush ... now that the cat is out of the bag and even the NY Times reported the facts surrounding this subject, now it is time for some public indignation ... How dare they pray in a synagogue?!

Why can't they leave well alone? You have initially done the right thing "Ye great Egypt" why not accept the thanks of an aging community and use it as a decent rapprochement with your estranged Jewish community. Why must you reset a good deed instead of moving forward with hope for a more positive future.

Dr Hawass, sir, I knew Nasser and you are no Nasser; so consider yourself lucky that you're not and continue to do the right thing and let the chips fall where they may; because polictics and antiquity ought not mix.

In his comment Mr. Fedida wrote:
"It is our hope that ex-Jews from Egypt would finally get their act together in a proactive way to join in an association that would represent a credible successor in the eyes of the local government."
It explains why you behave like you do. But dear Mr. Fedida, Egypt will Never but NEVER, let any ex-Egyptian Jew or any Jewish organization of ex-Egyptian Jews, to be the successor of Carmen the "puppet" or Ben-Gaon the other "puppet"... This is a Chateau en Espagne.
Moshe Antebi

The arabs will no longer get back their lost civilization and tolerance. Don't understand how they could justify such decision ... Arab politicians have failed ... and continue to accuse others for their failure ....
Atieke

the world will understand immediatly when we stop moslems praying in Jerusalem. Moslems understand unfortunatly only the language of an eye for an eye and a tooth fo tooth

an interesting phenomenon here:
Egypt, or rather Arab-Muslim Egypt, claims the heritage of people whom they threw out with little more than the clothes on their backs.

abraHamNothing has changed then?
We Jews have to keep shtumm to all the indecencies showered on us.
Why in heaven's name don't we understand that they will never change?
When I see Hawass he reminds me of Musslini who said "Il duce ha sempre ragione!"
Sultana Latifa