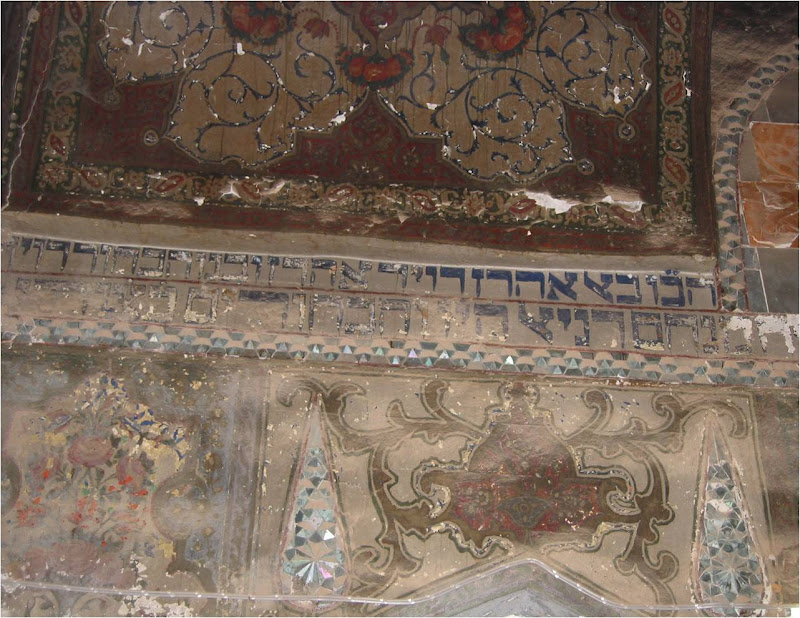 Hebrew inscription and floral ornamentation, now believed to have been erased as part of the 'renovation' of Ezekiel's tomb (Photo: MS)

As reports emerge of irrevocable damage to the Jewish character of the shrine of the prophet Ezekiel, a new website using digital mapping technology may be the only way to preserve how it once looked.

The news from southern Iraq, while disturbing, should spur support for Diarna’s efforts, says Maurice Shohet, who left Iraq in 1970 and is the former president of Congregation Bene Naharayim, which serves the Iraqi-American Jewish community in New York. Maurice adds that:

"Diarna (ديارنا) has been at the forefront of digitally preserving Jewish history in the broader Middle East and North Africa, including the traditional shrines of Jewish prophets from the Assyrian and Babylonian exiles. As a son of Iraq, I followed with a great deal of interest the Iraqi State Antiquities Authority’s renovation in 2008-2009 of Ezekiel’s tomb, which damaged its ancient Hebrew inscriptions and ornaments. Hundreds of other Jewish communal sites across the Middle East face similar dangers of decay and desecration. I ask those who care about this heritage to join me in supporting Diarna, so it can continue its vital work to preserve and conserve the memories of these sites before, as in the case of Ezekiel’s tomb, it is too late.

While the actual tomb has suffered “irrevocable damage,” Diarna presents a virtual exhibit, featuring a slideshow of archival and contemporary photos, a brief description of the tomb’s history, video (courtesy of photo-journalist Tsur Shezaf), and satellite imagery situating the site in context. Continue reading below, or open the site in Google Earth (a free program that can be downloaded here).

According to Iraqi Jewish tradition, the biblical prophet Ezekiel is buried next to a covered bazaar (the Daniel Market) near the Euphrates River, south of Baghdad, in a town which may once have been home to the Talmudic academy of Sura. For centuries, up until the 1960s, Iraqi Jewish families used to make pilgrimages to this site, often staying overnight in the guest rooms outside the shrine. While no Jews remain in al-Kifl, a Muslim family guards the site, now a shrine for Shia pilgrims.

The earliest written account attesting to this site’s significance stems from Benjamin of Tudela’s visit in 1170. His trip report states that the synagogue attached to the tomb contained a Torah scroll purportedly written by Ezekiel himself along with books from the period of the first Temple in Jerusalem. In the 1300s, Muslim officials turned the synagogue on the site into a mosque, which was ruined by flooding in 1778 (though the minaret still exists). Until the 1820s, Jews were banned from passing through the external courtyard to the tomb.

In the 1840s, Jews reclaimed control of the site after appealing to Ottoman authorities. A yeshiva (Yeshivat Kever Yehezkel) with scholars from Baghdad was established, and craftsmen from nearby Hilla and other cities settled there. Disputes over the site flared up again in 1860 and the 1930s, when the synagogue was taken over briefly by Muslims. To try to resolve tensions, Jews and Shi’a had different prayer times inside the shrine.

The shrine is located off the covered Daniel Market established by local Jews. In fact, some stalls owned by Jews, who left in the early 1950s, remain empty. Decayed Jewish homes and store rooms also remain along the back side of the shrine.

The entrance from the market opens onto a courtyard of mud buildings with olive, palm, and fig trees growing in the center. The small rooms surrounding the courtyard were used as guest rooms by Jewish pilgrims, who would come in large numbers during important holidays, including Passover, Sukkot, Shavuot, and the period between Rosh Hashanah and Yom Kippur.

A green wooden door off the courtyard opens into a room that was once the synagogue. Hebrew writing on the wall – at least until recently – read: “And this is the gravestone of our prophet Ezekiel.” A second room off the synagogue also features (or perhaps, featured) Hebrew inscriptions, and holds the wood-paneled vault surrounding Ezekiel’s tomb. Faded floral designs are painted on the wood. A tiny door at the bottom can be opened and reveals inside a concrete tomb featuring two tablets with the Hebrew name for Ezekiel inscribed on them.

For many years, a local Jewish family named Khalastchi served as caretakers of the shrine, holding the key and administering the guest rooms. (Celebrated Iraqi-Israeli author Eli Amir is a member of the family). Today, the site is under the control of the Shia Waqf (Endowment), and a Muslim man named Abu Khadum and his son serve as caretakers, welcoming people of all faiths to visit the shrine.