Another plug for Nada Abdelsamad's new book about the erstwhile inhabitants of Beirut's old Jewish quarter, Wadi Abou Jamil, this time in the Huffington Post.

"Dr. Shams, a kindly old physician who treated patients for almost no fee, or in return for chickens and eggs, was the most famous Jewish general practitioner in Lebanon.

"His sudden death and funeral drew patients of all denominations to honor a man who had treated them all with equal compassion.

"But others like teenager Gamalo Mezrahi left her home and friends in the Jewish Quarter for Israel when her parents decided to pack their belongings and start a new life.

"The creation of the state of Israel in 1948 was the turning point for Lebanese Jewish emigration, author Abdelsamad wrote, noting that pictures of pitched battles in what had been Palestine depicting terrified Palestinians carrying whatever they could to flee the oncoming Jewish fighters and settlers filled publications of the era.

"Untold numbers of Jews emigrated to Israel from 1948-on, for fear of repercussions against their community.

"But others lived through the 1967 Six-Day War pitting Israel against the armies of Egypt, Syria and Jordan, or stuck it out during the Lebanese Civil War, feeling more at home in Lebanon than what they considered an alien Zionist implant in the Middle East.

"The 274-page book published by Dar Annahar examines the lives of Beirut's Jews as remembered by their former neighbors and friends. But most of the characters' names were changed due to the sensitivity of the stories and unfolding regional events.

"One character's story was turned into a spy movie in Lebanon. 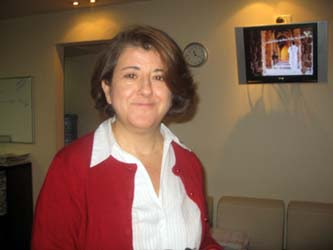 "The beautiful Shola Cohen worked at a local bank and often entertained well placed government officials in her apartment that was off-limits to her own neighbors.

"She also disappeared for stretches of time that people found fishy.

"Cohen, also known as The Pearl, was arrested in 1961, tried and sentenced to 20 years in jail for running a spy ring that provided Israel with sensitive information about military formations and other matters.

"A few years later she was released and swapped for four Lebanese soldiers captured by Israel across its border with Lebanon.

"Ironically, her son Yitzhak Levanon (Hebrew for Lebanon), who was born in Lebanon and speaks fluent Arabic, was named Israel's ambassador to Egypt in November 2009.

"Abdelsamad, the BBC's Arabic-language correspondent in Lebanon, wrote about the country's Jews after she was asked to report on the Shiite community in the wake of Israel's 33-day war against Lebanon in 2006.

"Lebanese Shiite Hezbollah fighters who killed three Israeli soldiers and kidnapped two others in a cross-border raid in July of that year triggered the war that crippled Lebanon but that an Israeli commission of inquiry deemed a "failure" for the Jewish state. .

"An occasional Ashkenazi name creeps into the tales of the community that, for the most part, worshipped at the Magen Abraham synagogue and sent its children to the secular Alliance Israelite School or the religious Talmud Torah School behind the temple. 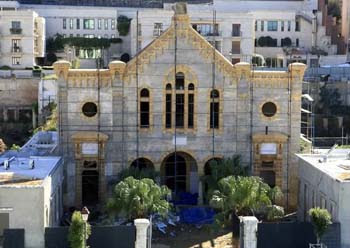 "The author's graceful narrative describes the relationships, entanglements and religious traditions of the quarter's Jewish, Christian and Muslim residents.

"Her very nimble prose, to be translated and published in English, lends credence to reports that Lebanon once had a thriving Jewish community numbering in the thousands, whose members were very much part of the social fabric.

"But some of Wadi Abou Jamil's residents who left as children with their parents during the different waves of Jewish emigration, returned as Israeli soldiers during Israel's invasion of Lebanon and the siege of Beirut in 1982.

"While pounding the city to kingdom come and cutting it off from food, water and fuel supplies, they found time to meander down memory lane to Wadi Abou Jamil in search of old neighbors and recognizable landmarks.

"Many were pressured to join their families in Israel and transited through the eastern Mediterranean island of Cyprus to get there."

Bataween, I read the post in full. I think the writer of the review is clearly biased in favor of repeating the myths about how well everybody got along before Zionism entered the scene. In fact, the review attracted one telling comment, which I reprint here: "While this looks like a very interesting read, I'm confused. It seems to imply no Jew was ever threatened in Lebanon and it's a complete mystery as to why they left. This is just not the case.

"In 1971, Albert Elia, the 69-year-old Secretary-General of the Lebanese Jewish community was kidnapped in Beirut by Syrian agents and imprisoned under torture in Damascus along with Syrian Jews who had attempted to flee the country. A personal appeal by the U.N. High Commissioner for Refugees, Prince Sadruddin Aga Khan to the late President Hafez al-Assad failed to secure Elia's release. The Lebanese Civil War, beginning in 1975, proved worse for the Jews. In 1982, during the Israeli invasion, 11 Jewish leaders were captured and killed by Islamist radicals. "

Quite right, Victor. I make the point in my last post about the book that it could do more harm than good by perpetuating the myth of the pre-Zionist nirvana.
There are actually two tendencies amongst these writers: one is to blame Zionism for the exodus of the Jews; the other is to claim, as K Schulze does in her book, that the civil war of 1975 was the decisive factor. In other words, all confessional communities were victims, including the Lebanese of the Jewish faith. Of course the problem with this explanation is that the Jews are the only community to have vanished off the scene.

Yes, if you read the review carefully, it all becomes clear that the bottom line for the writer is that a state where non-Arabs are the majority is somehow "wrong" or an "injustice." Of course, it's ok for Arabs to be the majority in 22 states with minorities living under THEM. In fact, the writer, in one sentence, freely admits that the Jews never had parliamentary representation in Lebanon. So they were never truly equal.

I think that Magda what's-her-name is wrong in writing on Huff Post that the Jews did not have any parliamentary representation in Lebanon, at least before the civil war or the 1967 Six Day War. I think that there was one seat reserved for the Jews in the parliament in Lebanon, as in Iran. Of course, that seat did not protect Jews from the armed PLO forces, etc.

Where Magda is more seriously wrong is her claim that Israel was "pounding the city [of Beirut] to kingdom come." In fact, the city was pounded badly during the civil war by the various Lebanese factions, the PLO forces and the Syrian army. Magda's claim on the Huff Post is false and tendentious.

Note that she is setting up the Lebanese Jews as Good Jews, whereas Israel equals the Bad Jews. She is conveying the tired old message: We were always tolerant and kind toward the Jews. Blah blah.

Eliyahu, you're absolutely right. For "Magda," it's the "good" Jews versus the "bad" Jews. The "good" Jews want to live as minorities in larger Arabic-dominated societies where Arabs call the shots and are the "Master," and "bad" Jews want their own right to self-govern, freedom, and independence. It's like a US Southern white person saying that black people are fine so long as they ride in the back of the bus.

Eliyahu,
It seems Magda is right that Jews were not represented in Parliament despite vigorous lobbying in 1937, when the no of seats was increased from 25 - 60. According to K Schulze (Jews of Lebanon, p57) only one seat was created to represent all minorities, incl the Jews.
As for who was protecting the Jews during the civil war, the picture is extremely confused. I read somewhere that Wadi Abu Jamil was the stronghold of Amal the Shiite militia at one point. Some 30 Jews were murdered during the civil war.

Apparently I stand corrected on the issue of whether there was a designated Jewish rep in the Lebanese parliament. However, I found that the Jewish community there made its desire for a Jewish representative known to Emile Edde, who was sympathetic to Zionism and was president of Lebanon from 1936 to 1941. [a book by Laura Zittrain Eisenberg, pp 63-64]

Emile Edde was sympathetic to Zionism? FINALLY, a Middle Eastern leader who realizes that the goal of self-determination applies to ALL peoples, not just Muslims and not only Arabs. Too bad he's a figure of the past.

We were always tolerant and kind toward the Jews.

The world badly needs a full-fledged conference of expert historians to debunk all the myths of saintly Muslim treatment of Jews - Andalusia, Lebanon, Albania, ...

They're all false; Jews were always second-class citizens, dhimmis - and in some Muslim countries subject to a form of near-apartheid.

As Eli Amir writes, 'Tolerance is a form of discrimination'.
Eliyahu, thanks for that fascinating link. Such was the sympathy of Edde and several other Lebanese leading figures for Zionism in the late 1930s - Ahdab, Arida and Shia MP Bey Haidar - that the joke was that the Jews already had enough representatives.

I am a Sephardic Jew born in Baghdad. Escaped at age 10 to Israel, through Iran.

I have retired in the U.S. and have written 2 books:
1. Full circle: Escape from Baghdad and the return
2. History of the Jews and Israel.
I am a prolific lecturer. Please vist www.saulsilasfathi.com
fathi@optonline.net