Currents of denial run deep among the Left

Is denial of Arab and Muslim antisemitism fast becoming a pathology of the left? Read my guest post on CiFwatch.

Leopold1904 must be a bewildered man. His comment, on the Uri Dromi thread, stating the facts of the 1840 Damascus blood libel - which Dromi had invoked in his piece on the Jenny Tongue ‘Israel harvests organs in Haiti’ affair - was deleted by the Comment is Free moderator. 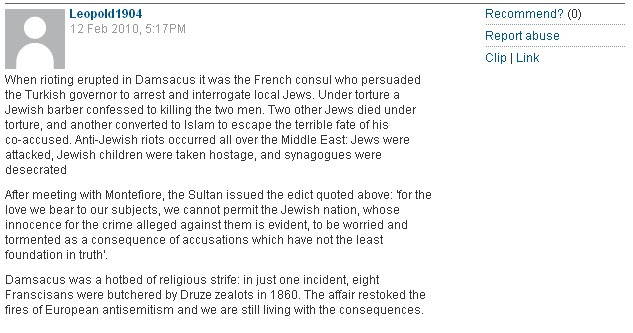 Does Leopold’s comment breach Comment is Free guidelines? Does it contain offensive or personal attacks? No. Is it defamatory? No. Is it irrelevant? No, it simply seeks to expand on Dromi’s cursory description of the Damascus blood libel. Its conclusion, that the affair ‘restoked the fires of European antisemitism’, is unassailable.

And not only the fires of European antisemitism. While the Damascus blood libel may have been started by Christians - and whether or not the sultan was wise enough to condemn the affair - the libel’s spread through the Ottoman Near East became unstoppable. The respected historian Bernard Lewis counts no less than 32 subsequent libel-fuelled antisemitic disturbances in Syria, Turkey, Egypt and Palestine in the late 19th century.

So why was Leopold1904 ‘s comment deleted? One can only surmise that it was removed because it lifts the veil on the precarious nature of Jewish existence under Muslim rule. Leopold's comment threatens one of the central tenets of the Guardian’s Middle East credo - that Jews and Arabs enjoyed peaceful and harmonious coexistence before those nasty Zionists came and spoilt it all with their absurd and unfair notion of a Jewish state in the Middle East.

What is worrying about this deletion is that not only are inconvenient facts being suppressed, but that any politically-incorrect statement casting doubt on the pre-Zionist nirvana in Arab lands is greeted with disbelief and denial.

I was reminded of how deeply this current of denial runs in the mindset of the anti-Zionist left in an exchange I had last week with Richard Silverstein of the Tikkun Olam blog . The fact that only seven Jews still remained in Iraq – it is actually six, as one has died - was proof positive that the 150,000 Jews of Iraq had been ‘ethnically-cleansed’, I argued.

Silverstein, an erstwhile CIF contributor, bristled with an almost allergic reaction to the expression ‘ethnic cleansing’. He threatened that if I dared to use it one more time, I would be banished from his blog. He went on:

How do you know there are 7 Jews left in Iraq? Who told you so? Who counted them? Besides, Jews leave a country for thousands of diff. reasons not all of which correspond to yr ideological diagnosis of ethnic cleansing. I have never read any serious scholar or journalist use this term, which indicates just how far out in right field you are. Personally, I think your alleged census numbers are not accurate. Pls. provide some authentification of them.

Well, I told him - we know who they are. There’s the ex-accountant, plus the nephew with whom he shares a rented house in Baghdad’s central Karrada district. There’s the man who lives near them, the man who leads the community, the very old woman, the male doctor and the female dentist. And the man whose brother was a goldsmith.The goldsmith married the dentist a few years ago. A few months later, he was abducted by gunmen.

Even this did not satisfy Silverstein: ... do you understand what evidence is? Not your listing the supposed occupations of specific Jews, but a credible piece of evidence that confirms yr claim.

In other words, nothing I told Silverstein would convince him that seven Jews remained in Baghdad - unless, perhaps, I went there, met each of those last Jews in the flesh and could name every last single one.

Silverstein’s attitude seems to tipify the scepticism of many commenters and observers of the Middle East. Everything Israel and its supporters say is an unsubstantiated claim, while what the Arabs and Palestinians say can be taken at face value. Baroness Tongue puts the onus on Israel to disprove her wild allegations of organ-harvesting. But when it comes to facts that show Arabs and Muslims in a bad light, everything must be taken with a healthy pinch of salt. How do you know that three Jews died under torture in Damascus and another converted to Islam, Leopold1904? Prove it. You weren’t there!

here's an account of the Damascus Affair that compares it with the Jenin Massacre Myth.

Here's an article on the Damascus Affair, comparing it with the Jenin Massacre Myth of 2002.

In the comments thread on your article on CIF Watch, some people brought up the Hebron massacre of 1929.

Somebody also brought up the issue of whether the Arabs wanted to kill only Ashkenazim or all the Jews.

Here is a list with photographs of the names of 58 of the 68 victims of the 1929 massacre in Hebron. You can read the names and see that both Ashkenazim and Sefardim [including Mizrahim] were victims of the massacre.
http://www.hebron.com/english/article.php?id=253

Here is an account of the Hebron massacre of 1929 by Pierre van Paassen, who was a famous journalist in the 1920s and 1930s.
http://www.hebron.com/english/article.php?id=252

Thanks for all this useful info, Eliyahu.
Indeed, a substantial proportion of the victims of the Hebron massacre were Sephardim/ Mizrahim. I commented that the story of the Arabs wishing to distinguish between Ashkenazim and Sephardim was a red herring, to my mind, because many victims were known to their murderers (ie the doctor, the rabbi) and all suffered the same fate in the end.

In the widely read leftist-libertarian "Unclaimed Territory" by Glenn Greenwald you cannot even question his assertion that Israel is a criminal state, the root of all evil and that it has its tentacles firmly in control of all governments, w/o being deleted.