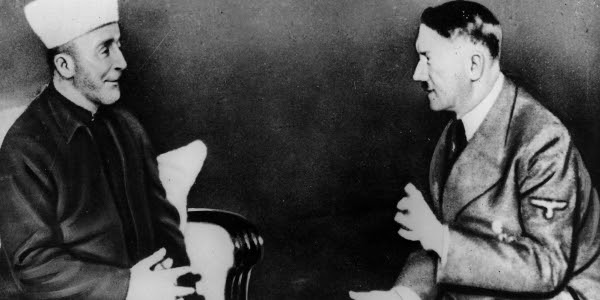 After the fall of Hitler, the Arab world never went through a process of recanting its sympathy for Nazi ideas. There is mounting evidence, Jeffrey Herf observes in The Chronicle of Education, that the antisemitism rampant in the Middle East has its roots in a toxic mix of Nazi hate propaganda and Islamist elements.

At 8:15 p.m. on July 7, 1942, the Voice of Free Arabism played a remarkable program titled, "Kill the Jews Before They Kill You." The broadcast began with a lie: "A large number of Jews residing in Egypt and a number of Poles, Greeks, Armenians, and Free French have been issued with revolvers and ammunition" to fight "against the Egyptians at the last moment, when Britain is forced to evacuate Egypt." The broadcast continued:

"In the face of this barbaric procedure by the British we think it best, if the life of the Egyptian nation is to be saved, that the Egyptians rise as one man to kill the Jews before they have a chance of betraying the Egyptian people. It is the duty of the Egyptians to annihilate the Jews and to destroy their property. … You must kill the Jews, before they open fire on you. Kill the Jews, who have appropriated your wealth and who are plotting against your security. Arabs of Syria, Iraq, and Palestine, what are you waiting for? The Jews are planning to violate your women, to kill your children and to destroy you. According to the Muslim religion, the defense of your life is a duty which can only be fulfilled by annihilating the Jews. This is your best opportunity to get rid of this dirty race, which has usurped your rights and brought misfortune and destruction on your countries. Kill the Jews, burn their property, destroy their stores, annihilate these base supporters of British imperialism. Your sole hope of salvation lies in annihilating the Jews before they annihilate you."

This broadcast, which combined secular political accusations with an appeal to the religious demands of Islam, was unusual only insofar as it explicitly voiced genocidal intentions that were merely implicit in other declarations about the venality and power of the Jews. Two German historians, Klaus-Michael Mallmann and Martin Cüppers, recently uncovered evidence that German intelligence agents were reporting back to Berlin that if Rommel succeeded in reaching Cairo and Palestine, the Axis powers could count on support from some elements in the Egyptian officer corps as well as the Muslim Brotherhood. Mallmann and Cüppers also show that an SS division was preparing to fly to Egypt to extend the Final Solution to the Middle East. The British and Australian defeat of Rommel at the Battle of El 'Alamein prevented that from happening.

How was Nazi propaganda received by Arabs and Muslims in the Middle East? Research into this question has begun, but much more remains to be done by scholars who read Arabic and Persian. It is clear, as Meir Litvak and Esther Webman point out in their important new book, From Empathy to Denial: Arab Responses to the Holocaust (Columbia University Press), that the revulsion for fascism and Nazism that greatly influenced postwar politics in Europe was not nearly as prevalent in the Middle East. In a June 1945 report, the Office of Strategic Services, the precursor to the Central Intelligence Agency, determined that "in the Near East the popular attitude toward the trial of war criminals is one of apathy. As a result of the general Near Eastern feeling of hostility to the imperialism of certain of the Allied powers, there is a tendency to sympathize with rather than condemn those who have aided the Axis." The OSS concluded that there was no support in the region for bringing pro-Axis Arab leaders like Husseini and Kilani to trial.

In the first months after the war, as the scope of the Jewish catastrophe in Europe was being revealed, Arab and Islamic radicals showed no sign of reconsidering their hostility to Zionism. On June 1, 1946, the OSS office in Cairo sent a report to Washington about a statement made by Hassan Al-Banna to the Arab League on the occasion of Husseini's return to Egypt. Banna, the leader of the Muslim Brotherhood, celebrated Husseini as a "hero who challenged an empire and fought Zionism, with the help of Hitler and Germany. Germany and Hitler are gone, but Amin Al-Husseini will continue the struggle. ... There must be a divine purpose behind the preservation of the life of this man, namely the defeat of Zionism. Amin! March on! God is with you! We are behind you! We are willing to sacrifice our necks for the cause. To death! Forward March."

Banna's hope that Husseini would "continue the struggle" indicates that Banna perceived the battle against Zionism as a continuation of Nazism's assault on the Jews. Sayyid Qutb, another extremely influential member of the Brotherhood, incorporated anti-Jewish ideas from Europe to forge a new jihadist ideology. In his essay from the early 1950s, "Our Struggle With the Jews," which became central in the canon of radical Islamist texts—the essay was republished in 1970 and distributed throughout the world by the monarchy in Saudi Arabia—Qutb argued that Jews are implacable enemies of Islam. As such, Qutb wrote, Jews merited "the worst kind of punishment." Qutb claimed that Allah had sent Hitler to earth to "punish" the Jews for their evil deeds. In so doing, Qutb justified, rather than denied, the Holocaust. This paranoid analysis, in turn, influenced the authors of the charter of Hamas, which blends Islamist fundamentalism with the Nazi ideology of mid-20th century Europe. The Hamas Charter holds Jews responsible for the French and the Russian Revolutions, World War I and World War II, as well as the founding of the United Nations—all of which were, Hamas argues, orchestrated for the purpose of furthering Jewish world domination.

Many decades and events stand between World War II and contemporary expressions of radical Islam. Yet the transcripts of Arabic-language propaganda broadcasts offer compelling evidence of a political and ideological meeting of minds between Nazism and radical Islam. The toxic mixture of religious and secular themes forged in Nazi-era Berlin, and disseminated to the Middle East, continues to shape the extreme politics of that region.

The readiness, indeed eagerness, of Egyptian officers to collaborate with the Nazis has long been known. Anwar Sadat discusses this in his book Revolte sur le Nil [Revolt on the Nile; circa 1956]. Sadat was frankly pro-Nazi according to his own words and blamed Egyptian Jews for foiling the attempt by pro-Nazi Egyptians to aid Rommel's invasion of Egypt.

If this info is at all new, it is only because modern Middle Eastern history has been taught in such a misleading way for many years, with many vital facts omitted.

Bataween, you probably know already about this article. But if not...