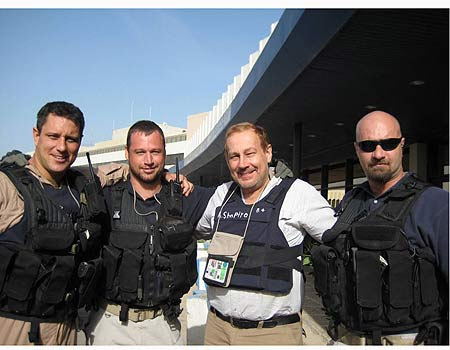 Alex Shapira (second from right) with his USAID colleagues

Engineer Alex Shapira from Bat Yam found he got on better with the locals than with the Americans during his assigment in Baghdad. " This is how peace is made - through personal ties," he told Ynet News. (With thanks: Lily)

Israeli engineer Alex Shapira, an advisor for business and energy development, was sent to Iraq by the United States Agency for International Development (USAID) and has managed to cultivate close friendships with officials in the local energy ministry.

"This is how you make peace, through personal ties," the 59-year-old, Israel-born Shapira told Ynet, "We do not know them well enough. When you live with them, eat with them, and speak with them openly, you connect with them heart to heart."

Shapira, originally from Bat-Yam, says he made special connections with two of the heads of the energy ministry. "Our starting point was when we realized that we like the same movies and the same musicians," he said.

"From there we really made a connection," he continued, "I knew their families and I would eat at their places. While they don't have tehina, their lamb meat is simply delicious. I discovered that they are the exact opposite of what we think, they are very pro-Israel. They told me that they could never have imagined how nice the Israelis are."

Shapira said he connected more with the Iraqis than with the Americans that he worked with: "Our mentality is much more similar to theirs than the Americans. When I left they really cried. Even now, after I left, we still talk through Skype.

"I even introduced them to some of my other Israeli friends. One of them has a child suffering from leukemia and he really wants to send him for medical treatment in Israel, I promised him I would look into this."

He said his friends in the ministry told him they would like to establish diplomatic ties. "They want peace and regret what was in the past," he said.

Shapira said such things aren't said openly, since "the situation there is very unstable. There is no strong government there and there are many extremist political groups influenced by Iran. They are afraid to speak."

While Shapira has been living in the US for the past several years, he considers himself an Israeli in every way.

"To the best of my knowledge, I was the only Israeli in Baghdad. I didn't present my identity candidly of course, and every place we went to we wore bullet proof vests, travelled in an armored vehicle and were accompanied by a private army of security guards.

Amazing. I really envy him. I would have loved to go and prove to the Iraqis that Israelis are nice - this would have been inforced by me being originally Iraqi - and not what the media in Arab countries portraying the Isarelis/Jews. The majority of Iraqis haven't even seen a jew in their lives and their conseption about a jew is what they have been brainwashed by the media/authorities and only by having these personl contacts they find the prove for what they may have been told by the older generation and how the Jews were nice, friendly, honest and loyal. Maybe one day I will be able to visit too.