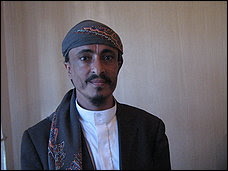 It's the Washington Post's turn to run an obituary for the Jews of Yemen, the last of whom are fleeing for the US or Israel. But the widow of Moshe al-Nahari, killed almost a year ago, tells Sudarsan Raghavan she will not leave until her husband's murderer is executed: (with thanks Lily, Edwin)

SANAA, YEMEN -- The last remaining Jews in Yemen are vanishing, driven out by politics, war and hatred. Once numbering 60,000, one of the oldest Jewish populations in the Arab world now has fewer than 350 members.

In recent months, persecution by Islamist extremists has intensified, accelerating Jews' flight from Yemen. Many are heading to the United States. With the help of the U.S. government and U.S.-based Jewish organizations, 57 Yemeni Jews have been resettled in New York since July. At least 38 are expected to arrive soon and many more are eligible, American officials said. Others are seeking refuge in Israel and Europe.

In the capital, Sanaa, 65 Jews who fled their northern villages are living in a government compound under heavy security. Last week, police arrested two men suspected of planning to assassinate the community's rabbi, according to Yemeni news reports.

The exodus of Yemen's Jews -- who survived the rise of Islam in the Arabian Peninsula and for centuries coexisted, if tenuously, with Muslims -- is the latest sign of this nation's social fragmentation. Yemen's weak central government is struggling with a civil war in the north, a secessionist movement in the south and a growing al-Qaeda presence. Large swathes of the nation, the Middle East's poorest, are controlled by tribes, which resent any interference from the government.

Rabbi Yahya Yehuda, like so many in his shrinking congregation, is faced with a dilemma as he waits for a visa to the United States or Israel. His mind, filled with memories of killings, beatings and harassment, tells him to flee his homeland. But his heart tells him otherwise.

The few hundred who stayed behind were concentrated in two areas -- in al-Salem, near the northern provincial capital of Saada, and in Raydah, about 45 miles north of Sanaa. There, they lived quietly under the radar of zealots, practicing Orthodox Jewish traditions. They attended synagogue, studied the Torah in religious schools and spoke Hebrew.

Many of the men were silversmiths, who made djanbias, the curved traditional daggers carried by Muslims. Others were blacksmiths, cabinetmakers or cobblers. Their curly locks of hair and their skullcaps differentiated them from Muslims.

In 2004, a Shiite rebellion broke out in Saada. The rebels, known as Hawthis, were an offshoot of the Zaydis. That December, they targeted al-Salem. They threw rocks at Jewish homes and damaged cars.

"They came at night, chanting slogans -- 'Death to America,' 'Death to Israel' and 'Curse the Jews,' " recalled Rabbi Yahya Yousef Mousa, 30, the target of the alleged assassination attempt.

Posted by bataween at Wednesday, November 25, 2009