Sad but true: Egyptians who dare call for cultural 'normalisation' with Israel put their own careers on the line, according to this unusually frank piece by Christian Fraser on the BBC News website. As Egypt declares a 'culture war' on Israel in revenge for Farouk Hosni's failure to get the top job at UNESCO, such intellectuals who fall foul of Egypt's 'unwritten rules' regarding Israel look more beleaguered than ever.

Above one of the narrow streets that wind through al-Ataba, in downtown Cairo, there is a street sign that reads Harat al-Yahoud - the Alley of the Jews.

It's a signpost to a period in Egypt's history when this neighbourhood was filled with Jewish families.

Historically, the Jews of Egypt were a significant part of the intellectual and business classes; they sent their children to private schools and controlled many of Egypt's largest banks and businesses.

But following the revolution in the 1950s, that brought Jamal Abdel Nasser to power, most of those businesses were confiscated by the state.

Houses were abandoned as tensions with Israel grew and today there are very few Jews still remaining in Cairo.

In Harat al-Yahoud the crumbling synagogue is about the only reminder.

It's recently undergone some much needed restoration but the secrecy that surrounds projects like this reveals that in reality there is still enormous mistrust, even hatred, that exists for anything connected to Israel - and that includes Jewish culture.

Egypt's Culture Minister Farouk's Hosny, failed last month to become head of Unesco - the UN Educational, Scientific and Cultural Organization - at least partly because of his views on Israel.

A minister for 22 years, he has refused to visit Israel, and his threat to burn any Israeli books he found in the Alexandria library, can hardly have helped.

But the vote at Unesco sparked an interesting debate - why is Egypt so opposed to any form of cultural normalisation?

True, there are no written laws to stop writers from travelling to Israel to promote their books but those who have tried have been castigated - even ostracised - by Egyptian society.

In 1994 Ali Salem, once one of Egypt's most prominent playwrights, finally gave in to burning curiosity, jumping into a car and driving himself to the border. 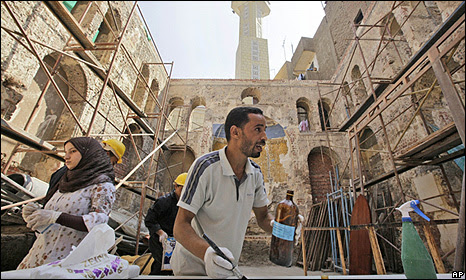 Restoration work began in August on the Maimonides synagogue in Cairo

He spent 23 nights in Israel and wrote a book about his trip.

"I asked myself who are these people and what are they doing? I wanted to find an answer," he said.

"And I don't regret it. I declared my thoughts and I translated it into action. Real co-operation between Egyptians and the Israelis would raise the possibility of peace in this region. I am sure of it."

Mr Salem was later expelled from the Writers' Union. In Egypt no-one will touch his work. Today his plays and movie scripts gather dust amid his tattered reputation.

Mr Salem believes the rules come from some place near the top.

"How else could it happen?" he said. "Farouk Hosni after his failure at Unesco blamed a Jewish conspiracy. At the airport he declared an intellectual war against Israel."

Hala Mustafa (pictured right), the editor-in-chief of Democracy magazine, is another who fell foul of these "unwritten rules".

"According to our constitution I have the right to think and act freely," she said, "to express my own point of view. There is nothing to prevent my meeting with Israelis - or with the Israeli ambassador who we all know is approved by the state."

Gaber Asfour, the director of Egypt's National Centre for Translation, thinks the reaction was entirely predictable.

"We are intellectuals and this issue is openly discussed. But peace is an effort. It takes two. And that is why we prefer Arab writers and academics to wait - until we have a fair peace," Mr Asfour argued.

Since the 1960s Mr Asfour says his department has only translated "around 10 books" directly from Hebrew. They stopped translating them in 2000.

But this year the Egyptian Ministry of Culture announced it had signed a contract with a European publishing house for translating books by Israeli authors David Grossman and Amos Oz from English.

"This way we don't have to speak to the Israeli publishers," explains Mr Asfour. "And we are going to preface each of these books with an introduction explaining everything."

"Don't you trust the reader?" I asked him.

"Of course we respect the mind of the reader," he replied. "But we are going to help him with this introduction.

"We have to know our enemy," he said. "Israel acts with injustice and inhumanity, we have to learn more about them. More than we already know. We have to translate everything."

Read article in full
Posted by bataween at Friday, October 02, 2009

more on the Laila Mourad programme

"...and controlled many of Egypt's largest banks and businesses..."

Whenever a journalist says that Jews "control" something my suspicions are aroused. Especially when they could have written "founded", or "established". It's often a giveaway.

The third comment by Anonymous is right. "Controlled" is a word meant to arouse hatred, and even to justify persecution. Didn't the Nazis complain that Jews "controlled" the German economy, etc., a claim that was in fact false although there were some Jewish bankers and capitalists in Germany. On the other hand, there were Krupps and Fuggers, etc.

This BBC writer depicts all the Egyptian Jews as rich, going to private schools, controlling the economy, etc. Were there no poor Jews in Egypt??