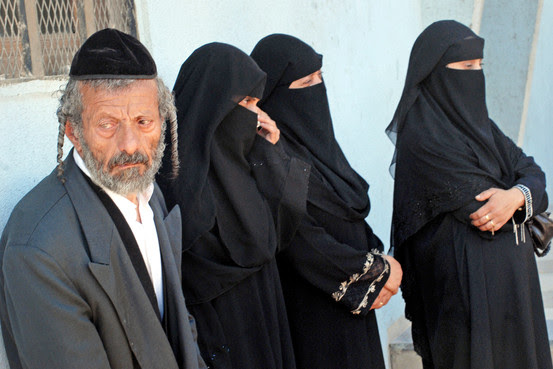 Feature by Miriam Jordan for the Wall Street Journal on the not-so-secret rescue of 60 Jews from Yemen and their resettlement in Monsey, New York, USA. With the emigration of these Jews, who have neither seen a multiplication table nor an alarm clock, a 3,000 year-old pre-Islamic Jewish presence in Yemen is coming to an end (with thanks: Shaul):

MONSEY, N.Y. -- In his new suburban American home, Shaker Yakub, a Yemeni Jew, folded a large scarf in half, wrapped it around his head and tucked in his spiraling side curls. "This is how I passed for a Muslim," said the 59-year-old father of seven, improvising a turban that hid his black skullcap.

The ploy enabled Mr. Yakub and half a dozen members of his family to slip undetected out of their native town of Raida, Yemen, and travel to the capital 50 miles to the south. There, they met U.S. State Department officials conducting a clandestine operation to bring some of Yemen's last remaining Jews to America to escape rising anti-Semitic violence in his country.

In all, about 60 Yemeni Jews have resettled in the U.S. since July; officials say another 100 could still come. There were an estimated 350 in Yemen before the operation began. Some of the remainder may go to Israel and some will stay behind, most in a government enclave. 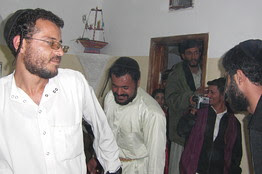 The secret evacuation of the Yemeni Jews -- considered by historians to be one of the oldest of the Jewish diaspora communities -- is a sign of America's growing concern about this Arabian Peninsula land of 23 million.

The operation followed a year of mounting harassment, and was plotted with Jewish relief groups while Washington was signaling alarm about Yemen. In July, Gen. David Petraeus was dispatched to Yemen to encourage President Ali Abdullah Saleh to be more aggressive against al-Qaeda terrorists in the country. Last month, President Barack Obama wrote in a letter to President Saleh that Yemen's security is vital to the region and the U.S.(...)

President Saleh has been trying to protect the Jews, but his inability to quell the rebellion in the country's north made it less likely he could do so, prompting the U.S. to step in. The alternative -- risking broader attacks on the Jews -- could well have undermined the Obama administration's efforts to rally support for President Saleh in the U.S. and abroad.

"If we had not done anything, we feared there would be bloodshed," says Gregg Rickman, former State Department Special Envoy to Monitor and Combat Anti-Semitism.

Mr. Yakub says the operation saved his family from intimidation that had made life in Yemen unbearable. Violence toward the country's small remaining Jewish community began to intensify last year, when one of its most prominent members was gunned down outside his house. But the mission also hastens the demise of one of the oldest remaining Jewish communities in the Arab world.

Jews are believed to have reached what is now Yemen more than 2,500 years ago as traders for King Solomon. They survived -- and at times thrived -- over centuries of change, including the spread of Islam across the Arabian Peninsula.

"They were one of the oldest exiled groups out of Israel," says Hayim Tawil, a Yeshiva University professor who is an expert on Yemeni Jewry. "This is the end of the Jewish Diaspora of Yemen. That's it."

Centuries of near total isolation make Yemeni Jews a living link with the ancient world.

Many can recite passages of the Torah by heart and read Hebrew, but can't read their native tongue of Arabic. They live in stone houses, often without running water or electricity. One Yemeni woman showed up at the airport expecting to board her flight with a live chicken.

Through the centuries, the Jews earned a living as merchants, craftsmen and silversmiths known for designing djanbias, traditional daggers that only Muslims are allowed to carry. Jewish musical compositions became part of Yemeni culture, played at Muslim weddings and festivals.

"Yemeni Jews have always been a part of Yemeni society and have lived side by side in peace with their Muslim brothers and sisters," said a spokeswoman for the Embassy of Yemen in Washington.

In 1947, on the eve of the birth of the state of Israel, protests (now there's a euphemism - ed) in the port city of Aden resulted in the death of dozens of Jews and the destruction of their homes and shops. In 1949 and 1950 about 49,000 people -- the majority of Yemen's Jewish community -- were airlifted to Israel in "Operation Magic Carpet."

About 2,000 Jews stayed in Yemen. Some trickled out until 1962, when civil war erupted. After that, they were stuck there. "For three decades, there were no telephone calls, no letters, no traveling overseas. The fact there were Jews in Yemen was barely known outside Israel," says Prof. Tawil.

To see Jewish women being dressed up like that... it's so weird...

Not as weird as shaving your head and wearing a wig made of someone else's hair. I hope the rest of the Teimani Jewish community is safe

Why weird? These people are Yemeni first than jews second. After hundred of years of islamic dhimmitude no wonder jewish women are made to wear the same attires as the arab yemeni women. Why bring attention to yourself when all arab yemeni women at cover from head to toe.

I think it is a sign of strength as well as humility and respect of the arab culture. Yet the arab culture shows no respect but only contempt and slander for their jewish compatriotes even if they dress like them, talk their language and share some of the habits. This goes to show that it does not matter what you wear. It shows that Yemeni jews tried adapt to the arabian culture while still retaining their jewish faith.

just a minute, Sammish. How do you know that Yemeni Jewish women traditionally dressed like that?

I don't that the full burka and hijab outfit was traditional garb for Jewish women there.

Eliyahu,
I did not mean that jewish Yemini women used to dress like that. You need to read carefully what I wrote. You misconstrued my point. I meant to say that Arab muslim women have probably been wearing those burkas for quite sometimes. You need to remember that Yemen is a strict orthodox muslim culture. I cannot tell exactly when this all started. Even if it was the expansion and effect of Saudi Wahabism, one has to wonder why Jewish women were wearing those veils and Burkas.

I was implying that Jewish women were compelled to adopt those attires when present in public places. They had no choice on the matter, but to show modesty and adopt the head scarfs and veils and so on... To this I said that Jewish women were in effect showing humility and respecting the norms of Yemeni society by complying ... What can they do under islamic dhimmitude? Yemen is not Morocco, beleive me... I wish they had choice to wear what ever they want..

bull! as a whole there's hardly any attacks on Jews in Yemen,they are protected by government and tribesman.you need two to tango ,i.e Yemeni jews who wanted to upgrade their lifestyle and find suitors for their coming of age kids ,satmer jews who work as missionary in yemen and israeli no nothing do gooders who do not understand arebia . some of the jews from the north enjoyed overexposure by the media that was used by everyone, friend and foe alike. those folks should have been all settled in England with all the other yemenis.

First of all. Since Judaism came first, and Married Jewish Woman must Cover their hair. I have NO idea why Arabs copied Judiasm with a woman's head covering and a man's without ever giving credit where credit is do, like a million other things they and others copy and live without giving credit to the Torah. ?! Annoying, to say the least.