Sipping from the Nile by Jean Naggar: a review 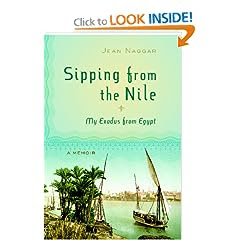 A torrent of memoirs continues to pour forth from the Jews of Egypt. The latest is Jean Naggar’s Sipping from the Nile, an elegantly-written memoir of a bygone age. Review by Lyn Julius.


Sipping the waters of the Nile can’t be much good for you: there's bilharzia, dead donkeys and all manner of pollution floating in the world’s longest river. Ugh.

But sipping from the Nile is an old Egyptian tradition. (When Egypt had a thriving Jewish community of 80,000, one assumes the waters of the Nile might have been more potable than they are now.) It was customary in Jean V Naggar’s family to offer visitors to a house a glass of Nile water before they left. It meant they would return.

This charming habit testifies to the power of superstition in that part of the world - one which Jean’s family would take with them into exile. Sipping from the Nile, the elegantly-written memoir of a girl born into a large and close-knit family of the Jewish haute bourgeoisie, is a title heavy with irony, given that all non-Egyptians, and eventually almost all Jews, were slung out of the country carrying papers marked ‘one-way: no return. '

However, years after the family were expelled for good when Jean was 19, return she did (in 1990 but as a tourist) to the grand villa in Cairo, now occupied by the Russian ambassador, which she barely recognised as her childhood home.

On Jean’s father’s side, the Mosseris owned the largest private investment bank in Egypt. The family had lived in Cairo 200 years, longer than the government official who initially came to serve notice on them to leave. Although the expulsion order was rescinded (an old Sephardi family, the Mosseris had retained Italian nationality, and Italy was neutral in the Suez crisis) Jean’s father Guido Mosseri determined that there was no future for himself, his wife and three children in Egypt after 1956. The Egyptian government took possession of the bank and ‘paid’ him in government bonds due to mature 20 years later, by which time they were worthless. The family could take as many suitcases as they wanted out of Egypt, but no currency. They were dispossessed of most of their assets and could not take out the money they received from the sale of their house to the Russians.

On her mother’s side, Jean was a Smouha, a family originally from Baghdad and Damascus via Manchester. A ravishing readhead, Jean's mother once caught the roving eye of the king himself. Jean's modernising Smouha grandfather Joseph had the foresight and acumen to drain a malarial swamp the size of Central Park in Alexandria - building a ’city within a city’, boasting avenues, squares, upmarket villas, a sporting club, golf course and race track. King Fouad of Egypt insisted that the development be called Smouha city, which it still is today. Most of the family’s fortune is still tied up there, as Grandpa Smouha feared that diversification might even threaten the stability of the Egyptian economy. The family, whose assets were seized on account of their British nationality, are to this day fighting in the Egyptian courts for restitution and ownership rights.

As did most westernised, affluent Egyptian Jews, the Mosseri-Smouhas lived in a colonial-style, polyglot bubble (conversing in a mixture of languages endearingly referred to as Frarabish). They hobnobbed with diplomats and aristocrats. The Agha Khan, a neighbour, vied with Jean’s uncle Victor as to who could grow the best watermelons on their summer estates.

Except for the suffraghies (servants), there was little contact with the natives. Life was a whirl of parties and family celebrations. Their wardrobes were stocked with the latest Paris fashions. They vacationed in Europe to escape the Egyptian heat. It was on one such trip to London that the eyes of Mosseri boy and Smouha girl met at Lauderdale Road synagogue in Maida Vale. Theirs was a marriage made in heaven.

The children were sent to English boarding schools to receive the best education that money could buy. Jean, who early on developed a love of books and a talent for music and poetry, spent five years at Roedean, the girls’ public school in Brighton, where homesickness and and the spartan regime were mitigated somewhat by having other Smouha cousins around. As she reached marriageable age Jean understood she was expected not to marry beneath her station: her parents disapproved of her Ashkenazi college boyfriend ‘from the shtetl’.

This book has little of the drama of other Egyptian exodus stories, such as Lucette Lagnado’s The man in the white sharkskin suit. It’s a gentle meander down memory lane and up the various branches of the author’s family tree into a bygone world of privilege, remarkably free of intrigue, and insulated from the political storms raging around them.

The real casualty of this Egyptian exodus is Guido Mosseri. As the pater familias he paid with his health for the stress of the family’s brutal uprooting, and died early from cancer in his 60s.

In Egypt the family genuinely delighted in each other’s presence at gatherings and Jewish festivals. They were a loving clan of ’huggers and kissers’, as Jean puts it. Now living in the US, what she misses most is the precious closeness she recalls from childhood. Theirs is really an emotional exile, now that the family is scattered across countries and continents.

This is the best book I have ever read. Ms. Jean Naggar is absolutely great writer that deserve well recognitions for her superb elegant writing. her story is the most inspiring story that can teach everyone how to deal with life's cruelty when it's thrown at us without any warning but Never bitterness, or hate! a lot to learn from this memoir. everyone must read this amazing book.

this is from someone who had grown up in Egypt. and no I am not a Jew but I have all the respect to someone so special as Ms. Jean. her memoir can make the difference

Yes, Jews have the right to live among us in the world free. and Israel, as a nation, has the right to exists among Arab nations in peace. no one can OR will "G_D willing" changes or take this away either.

Thank you Ms. Naggar for sharing this wonderful memory with us.

Every writer has a story to share and hopes that something of themselves reaches out into a larger world. Thank you Mustafa S. for showing me that it was worth all the hard work of writing SIPPING FROM THE NILE, and for letting me know that my words have meant something to you.
Jean Naggar