Private motive for Egypt's embrace of Jewish past

Politics account for Egypt's sudden renewed interest in its Jewish heritage, Michael Slackman argues in The Sunday San Francisco Chronicle, in an article reprinted from The New York Times: the politics of persuading the world that Egypt's judeophobic culture minister Farouk Hosni is the best man to head UNESCO (voting begins this week).

While Egyptians are now being forced to acknowledge that 'their history was intervowen with Jewish history', it is striking that they consider Egypt's Jewish heritage as belonging to them. The dictum springs to mind - 'what's ours is ours and what's yours is ours' (with thanks: Victor):

CAIRO — Egyptians generally do not make any distinction between Jewish people and Israelis. Israelis are seen as the enemy, so Jews are, too. 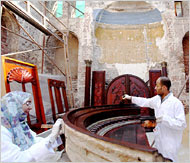 Restoration work being done last month at a synagogue where Moses Maimonides once worked and studied in Cairo. (Shawn Baldwin)

Khalid Badr, 40, is pretty typical in that regard, living in a neighborhood of winding, rutted roads in Old Cairo, selling snacks from a kiosk while listening to the Koran on the radio. Asked his feelings about Jews, he replied matter-of-factly. “We hate them for everything they have done to us,” Mr. Badr said, as casually as if he had been asked the time.

But Mr. Badr’s ideas have recently been challenged. He has had to confront the reality that his neighborhood was once filled with Jews — Egyptian Jews — and that his nation’s history is interwoven with Jewish history. Not far from his shop, down another narrow, winding alley once called the Alley of the Jews, the government is busy renovating an abandoned, dilapidated synagogue.

In fact, the government is not just renovating the crumbling, flooded old building. It is publicly embracing its Jewish past — not the kind of thing you ordinarily hear from Egyptian officials.

“If you don’t restore the Jewish synagogues, you lose a part of your history,” said Zaki Hawass, general secretary of the Supreme Council of Antiquities, who in the past has written negatively about Jews because of the clash between Israel and the Palestinians. “It is part of our heritage.”(...)

For Egyptians like Mr. Hawass, who seems most comfortable around Pharaonic tombs and mummies, speaking about Egypt’s Jewish past with pride has required a degree of finesse. Mr. Hawass has in the past refused a suggestion by the American Jewish Committee to consider building a small museum to house Egypt’s historic Jewish artifacts, as the government has done to preserve many of Egypt’s Christian artifacts.

As he strode through the old Jewish quarter recently, waving his handwritten list of all the Jewish preservation projects he is now overseeing, Mr. Hawass said that he would not build a Jewish museum in Cairo until the Israeli-Palestinian conflict was resolved.

“If you make a museum like that while Israel is killing Palestinian children, people will kill me,” he said. “What we are doing now is not for the Jews; it is for us, for our heritage,” Egypt’s Jewish heritage.

This tends to be the thinking throughout the neighborhood. The older residents, like El Sayyid Yousef, 62, who moved here when he was 12, had a perspective shaped by the sweep of history. Mr. Yousef said he remembered having Jewish neighbors but never thought of them as Jewish. They were just Egyptians, like everyone else, he said.

“When we grew up, after 1967 we started to understand the sensitivities,” he said. “Because of what happened in the war, you would walk in the street and if you saw a Jew you would want to kill him.”

That was the case for Jews all over Egypt, who with each Arab-Israeli war left or were forced out. There are fewer than 100, some say fewer than 80, Jews left in Egypt today, making the preservation projects all the more important, Rabbi Baker said.

It is unclear whether the projects will help Mr. Hosny in his bid for the Unesco position. And they may cause many residents to attack the government for spending money on them. “We can remove it and build a mosque in its place” was Mr. Badr’s suggestion.

Even so, the effort has already inspired Mr. Yousef and his son, and perhaps others, to begin to see beyond the Arab-Israeli conflict, which for so many has defined faith, culture and heritage.

“As Muslims or as Christians, it might not be ours, but as Egyptians it is ours,” Mr. Yousef’s son, Sameh, 27, said of the synagogue after sitting quietly for much of the conversation. “It may not be our religion, but as a building it is our heritage.”

NB The suggestion that Egypt has been spending lots of public money on Jewish restoration is misleading. The Geneva philanthropist Nessim Gaon donated one million dollars forthe restoration of the Cairo synagogue Shaar Hashamayim (Adly St.) The Egyptian Antiquities Authorities only contributed a small sum towards a facelift for the synagogue's 100th anniversary. Another one million dollars was given by Mrs Phyllis Lambert of the USA to pay for the restoration of the Ben Ezra synagogue, today one of Egypt's prime tourist sites. No doubt the government's investment in restoring the Maimonides synagogue will also pay tourist dividends. (Ed)
Posted by bataween at Monday, September 14, 2009

here's a blog post about one of the last eight Jews in Baghdad.

All these public relations from Egypt about its respect of Jewish culture as shown in its quick reversal of restoration of evrything Egypo-Jewish are bogus.

Where have they been all this time?these proud Egyptians, pround of their unique eccletic culture, pround of the Jewish heritage which by the way built the country from the ground up and usher it into the modern era... Why all of the sudden all these infatuations about everything Jewish....

If it is not a state mandated, propagated PR propaganda scheme to have their anti-semetic Farouk Hosni elected as the head of UNESCO, I do not know what is it they are trying to fool....

The question is why now? What happens all these times that have passed...Did a Elijiah stop by at some people homes or the president's palace during Ramadhan for a cup of tea?

Beware of madmen of deception and lies...for they will turn against you as a pack of wild dogs and wolves...

Sammish
You make a good point.
The restoration of synagogues began some time ago, but the Egyptians were ashamed to admit it. Now Hosni needs the PR!