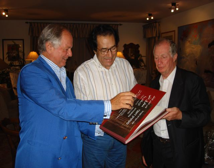 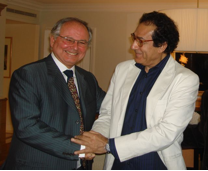 The Egyptian culture minister Farouk Hosni, a controversial front-runner to be UNESCO's next director-general, has assured Jewish leaders that copies of Jewish community archives and registers will be made freely accessible for the first time.

During a meeting in Cairo on 29 August with Yves Fedida and Alec Nacamuli, members of the Nebi Daniel Association Council, Mr Hosni reiterated his promise to allow all archives and registers currently held by the Jewish communities to be copied. The copies would be deposited for free access at the Egyptian National Library.

This new development is a victory for Nebi Daniel, which has been campaigning since 2002 for Jewish community archives and registers - classified as immovable Egyptian antiquities - to be accessible.

"We are fully confident that our objective of making these archives available to researchers worldwide will be met within the next few weeks," Yves Fedida declared in a press release, wishing Mr Hosni 'good luck' for his election on 24 September to head UNESCO.

Mr Hosni's assurance comes two months after Yves Fedida first asked Mr Hosni for "permission to copy the civil and religious registers still kept at the Jewish Communities for genealogical research, the issuance of civil identity papers and to study this exemplary cohabitation in an Islamic country.”

The Minister replied: “it is your right and I personally agree to it.”

Thanking him, Yves Fedida said: “this commitment, proof of your attachment to education and culture, would augur well for your election to UNESCO ; 3-400,000 descendants of the 80,000 Jews from Egypt, who have rebuilt their lives in over 80 countries, will applaud this gesture.”

The Egyptian culture minister, who is a controversial front-runner to head UNESCO as its next director-general, had come under fire for saying he would 'burn Israeli books' in Egypt. He has since apologised.

Recently Egypt has been at pains to show the lengths it is going to preserve the country's Jewish heritage, embarking on an independent programme of restoration since 2006. Yves Fedida and Alec Nacamuli were taken to the Maimonides synagogue and yeshiva, whose restoration will be finished by next March. The Karaite synagogue in Cairo and the interior courtyard of the main synagogue on Adly Street are also being restored. Some 10 synagogues out of 15 are under preservation order.

Nebi Daniel, which has been fighting for the preservation of Egypt's Jewish cultural and religious heritage since 2002, has expressed its satisfaction with the Egyptian's government's efforts.


NY Times: private motive for Egypt's public embrace of its Jewish past (with thanks: Lily)

NY Times Op-ed 'An Egyptian at UNESCO' by Roger Cohen : "What Hosny said was vile, a reflection of the prejudices of his compatriots — prejudices that Israel’s settlements policy does nothing to assuage. There are good alternative candidates, notably the former Austrian foreign minister Benita Ferrero-Waldner, who carry none of his baggage. But there’s also something evasive about the alternatives. Hosny stands at the crux of the cultural challenges confronting us. Let’s get him inside the tent rather than stoke the old anti-Western, anti-imperialist flames — reminiscent of what led the United States to abandon Unesco between 1984 and 2002 — by rejecting him."

"...and to study this exemplary cohabitation in an Islamic country..."

Was it absolutely necessary for the Jewish representative to utter these words of self-abasement and falsehood? Why should any Gentile respect Jews who do not respect themselves?