Derelict Cairo synagogue may have been sold 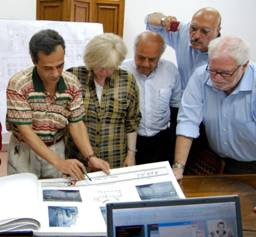 From left: An engineer from the Egyptian Supreme Council of Antiquities (SCA) gives a presentation on Jewish sites to Cilly Kugelman of the Berlin Jewish Museum, Roger Bilboul of Nebi Daniel and Rabbi Andrew Baker of the American Jewish Committee, while the head of the Jewish section of the SCA records the scene with his camera.

A dispute over the future of a synagogue in the old Jewish Quarter of Cairo has sparked alarm among Jews outside Egypt who fear for the preservation of their heritage.

Update: Nebi Daniel has now heard from the local Jewish community. They claim that this is not a synagogue, it is an old building in Haret el Yahoud that was used as a Yeshiva prior to the 60s. In the 60s and 70s the Community used it as temporary accommodation for those in need prior to their emigration. All the books, pictures, etc. (which were part of the Yeshiva) were strewn throughout the building. The building has been abandoned for a long time. Through lack of funds the Community did not maintain or guard the building. Some three years ago squatters and other unsavoury characters tried to occupy the building. At the request of the Community, the government has sealed the building since.

Associations of Egyptian Jews outside Egypt are seeking confirmation that this was a synagogue sold by the community sometime ago. A problem could have arisen with title registration, leading to the dispute reported in Yom - el Sabeth. The Egyptian government is to determine the fate of the site.

According to rabbinic law, synagogues must not be put up for sale. In those rare cases where synagogues are sold, the proceeds must be used for the restoration of other synagogues.

Below is a list of all Jewish monuments in Egypt under the care of the Alexandria and Cairo communities. Those marked with an asterisk are under a government preservation order. They cannot be altered without the permission of the government nor can they be sold for any other purpose but to serve as a synagogue.

Synagogues and monuments in Cairo:

Synagogues and monuments in Alexandria

"Of the 10 synagogues plus the mausoleum under preservation order, the government has decided to use its own funds to renovate them. The Maimonides synagogue is in a very poor state and is in an area that is flooded by rising water levels. The government scheme is to drain the whole area and restore the synagogue and the Maimonides yeshiva as near as possible to its original state.

I have seen with my own eyes the restoration programme in progress. The picture above shows an engineer from the Supreme Council of Antiquities (SCA) giving us a detailed presentation, showing us the plans and the budgets for all the 11 sites under their aegis.
 
"The Abu Hassira shrine has recently been renovated with monies donated by Moroccan Jews. Israeli engineers came to supervise the work to the specification of the donors.

"What we have still not achieved is obtaining permission to copy our archives and to be involved in the future management of Jewish communal assets when there are no more local Jews to take care of them."
Posted by bataween at Wednesday, August 12, 2009

I was told that the last Jew in Ouarzazate sold the Synagogue to a local shop keeper and that it is now a tile shop - I have seen the tile shop !

It's actually a rug store.

We inspired Moses and his brother. "Maintain your homes in Egypt for the time being, turn your homes into synagogues, and maintain the Contact Prayers (Salat). Give good news to the believers." (10:87)

I thought I would be anxious, a Jewish woman walking around Coptic Cairo by herself. But it was totally wonderful.

Thanks for the link
Hels
Art and Architecture, mainly
http://melbourneblogger.blogspot.com/2009/12/ben-ezra-synagogue-in-coptic-cairo.html