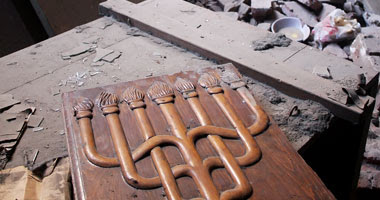 A synagogue in central Cairo is at the heart of a tussle between the Egyptian authorities and property developers because it stands on land worth tens of millions of dollars, the Egyptian newspaper Yom el sabeth (The Seventh Day) reports. The question is: why is the Jewish community not speaking up for the preservation of its heritage? Will the Israeli government raise this issue with Egypt? (With thanks: Ahron Cohen)

Update: UNESCO has already been approached on this matter, and Egyptian Jews in Israel are contacting the Sephardi Chief Rabbi, Ovadia Yosef.

The fate of the synagogue, on two floors and in the Jewish Quarter, in the Gamalia area of Cairo, is to be decided by Egyptian Minister Abd Alat.

Rubbish piled high on the ground floor meant that journalists had to enter the building from the upper floor of adjacent houses.

The photos show a mural of the 11th century rabbi Moshe ben Maimon (Maimonides), the most famous of the community's leaders, a relief menorah and Star of David. A plaque records a donation by Joseph Antebi. Prayer books and a cantor's robe were also photographed in the ruins.

Original piece in Arabic posted at Historical Society of Jews from Egypt.

HSJE links to a second report that a public official had tried to sell a synagogue, claiming he was the owner:

Update: Today's edition of Yom el Sabeth reports that Amer Badr has been remanded in custody accused of fraud and appropriating the property of the Jewish community in Cairo. The case will be heard in 15 days.

As we all know, Synagogues are, by rabbinic law, not for sale. But it happens, because the so-called Jewish Community of Cairo, which comprises no more than a handful of old women, is too weak or too afraid to react.
Levana Zamir

We inspired Moses and his brother. "Maintain your homes in Egypt for the time being, turn your homes into synagogues, and maintain the Contact Prayers (Salat). Give good news to the believers." (10:87)