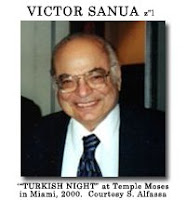 The Egyptian-Jewish and Sephardi communities have lost an important voice. Victor D Sanua, PhD, passed away after a long illness. His funeral took place on 13 July in Brooklyn, USA.

Shelomo Alfassa writes: "Victor was proudly a Jew from Egypt who grew up speaking French, Ladino, Hebrew and Arabic. His family was from Spain 500 years ago, but moved to Italy and later settled in Istanbul. He grew up in Cairo. His name Sanua means 'modest' in Hebrew, and that is what he was. He dedicated his life to educating politicians and everyday people on the persecution against Jews in Egypt and their forced departure.

"Victor Sanua was Research Professor in the Department of Psychology at St. John's University and the President of the International Association of Jews from Egypt (IAJE). He was also a dear friend and neighbor, and I, like so many others, will miss him very much."

Dr Sanua was a prolific writer and fount of invaluable knowledge on Egyptian Jewry. His Guide to Egyptian Jewry in the Mid-Twentieth Century was a compilation of newsletters written for the IAJE - reviews, comment, photographs - some smuggled out of Egypt - conference papers and a dozen articles. His work is all the more precious in view of the fact that the Jewish community archives in Egypt remain off-limits to the descendants of Egyptian Jews.

You can read three of his articles online here, here and here.

Victor Sanua once wrote that he had been hired for a short period as a translator in a camp for palestinian Arab refugees during the later months of the 1947-49 Arab-Israeli War [the War of Independence]. I always wondered what he might tell us about what was going on those camps at that time, what the Westerners in charge of the camps were telling those Arab refugees. Now it's too late although some folks close to him may know something about these questions.

I am very sorry to hear that my dear friend, Victor Sanua, has passed away. He was a true gentleman with a heart of gold, and a great researcher of the Jewish Community in Egypt.

His ardent research, his multiple works and many books on the Jews of Egypt and their tragic uprooting, will remain as a vibrant monument and a basic cornerstone of the research and writings on our cherished disappeared community.

Victor's genuine lovable smile, and his wonderful personality, will
remain in my heart forever.

May he rest in peace,
Ada Aharoni

May God have mercy on the deceased and the curse of God on the lead dog Abdel Nasser and the devastation Damarho and his gang who carried out the coup d'idiot parents who wish the country and the subjects to come to Egypt, Egypt is the second most in need of economic minds like you in the I and the other, you Msriyon us and you what you what we

Sameh's comment in Arabic (above) may be translated as follows:
"May God have mercy on the deceased, and the curse of God on the dog Abdel Nasser and his gang, who carried the idiot Coup, and brought devastation and ruins to the country and its citizens. We wish you to come back to Egypt, which is most in need of economic minds like yours. To begin with and to end with, you are Egyptians. So for you if not for us."

Victor was the AJE (UK)'s mentor. In 2001, he organized the first ever reunion of Jews from Egypt in London and encouraged us there and then to form the new Association. The rest is history as they say. I will always remember him for the generous way he shared his knowledge and his enthusiasm for keeping our Egyptian heritage alive for the benefit of the next generations. Without him the community is that much the poorer but his important legacy will live on for ever. May he rest in Peace and the AJE (UK)Committee and members express their heartfelt condolences to his family, relatives and friends.
Maurice Maleh
Chairman, AJE (UK)

I was saddened to hear about Dr. Victor Sanua. I met Dr. Sanua at a conference when I was a psychology student. At that time, we shared common ground with regard to our views on prescription privileges. Through the years, we kept in touch and had many intellectual and meaningful conversations. He shared his passion for Egyptian Jewry with me as well. Dr. Sanua was a mentor, a teacher, and a good person. I will miss him greatly.

While we greatly mourn the passing of Dr. Sanua, we are delighted that his unique voice and wonderful humor will live on in our new exhibit "Voices of Liberty" opening November 6th at the Keeping History Center/Museum of Jewish Heritage, NY. Please come visit to hear him and other discuss their experiences as refugees in America.