Kasser Shashoua, a Baghdad palace fit for a king 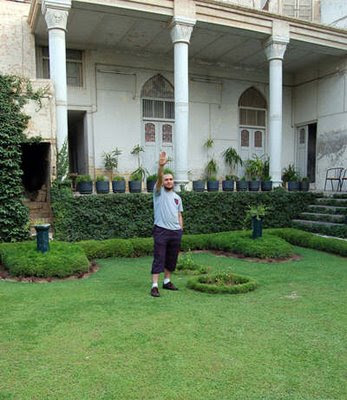 (With thanks: Dia)
A woman was once being interviewed on an Iraqi TV talk show. "I'm so tired," she complained, "cleaning my house all day long."

" What do you think you are doing," the talk show host retorted," cleaning Kasser Shashoua? You only have two small rooms."

The banks of the river Tigris were prone to frequent flooding and especially at Adhamiyah where the Kasser stood at a sharp bend in the river. Water eroded the kasser. Eventually, part of the building crumbled into the river.

Lisette, Shaul Shashoua's grand-daughter, has a cousin who remembers spending her childhood in the house. The cousin recalls that when part of the house fell in the water, the front door was so huge that it got stuck under one of Baghdad's bridges. A huge key, more than a foot long, was still in the keyhole !

Lisette also tells that when her aunt Marcelle married Shaul's son Salim Shashoua, Marcelle's father warned her not to move into the house. It was already crumbling before it collapsed into the water. The house was later sold. 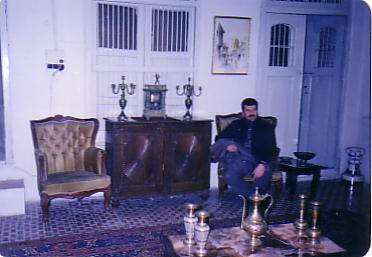 The photographs here, obtained by Stephen Shashoua and Elsie Solomon, show the white veranda where another aunt got engaged ; the present owner, who is from the Bunia family, and the house interior; the gothic splendour of the kasser and its manicured lawns. The owner is very proud of the house and considers it part of Iraq's heritage. He erected a plaque in the house listing all the past owners. 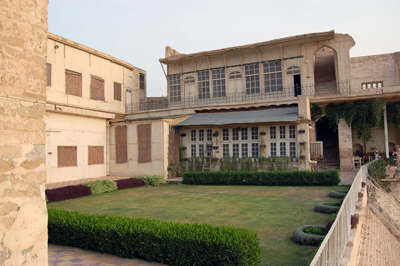 Dr Emily Porter and Dr Ali Thuweni will show recent photos and talk about the plan to renovate Kasser Shashoua and bring it back to its former glory. Lecture in Arabic on 12 July at 6.30pm at 43 Lancaster Gate London W2 3NA. Entrance £3. The evening is being organised by Dr Emily Porter and Dia Kashi. 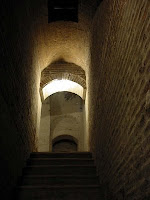 wow. too cool (although yes, I wouldn't like to clean it).

Hello bataween,
my father, Maurice Shashoua is the grandson of Shaul Shashoua and have lived in this house during his childhood.

I will be very glad if you can send the contacts of Dr. Porter so my father can contact him.

Best regards,
Shaul Shashoua (named as a honour for my grand grand father)

Dear Shaul
Please email me at bataween@gmail.com and I'll send you Dr Porter's details (who is in fact a she!)

Very interesting,In fact I'm interested in knowing facts about Jewish history and their role in Iraq,I have always being hearing about a number of distinguished Iraqi Jewish characters that people of Iraq still remember till these days

My father told me of this story.
My father changed his surname from shashoua to shashou, when he left Iraq.
I think the guy who owned the castle made his money in India, someone who was very well respected.
I think this guy was either my great grandfather.
Some things I would never know the full story too.

Kaser shashous is next to our house, I'm from Al-Saji family, one of the old families who live in Kasrsa, where Shashoua is. I've been to Kaser Shashoua yesterday, do you want to contact the family who lives there now? I'll be flad to help!

I'm working on the outlines of a heritage map project for Baghdad and would greatly appreciate contacting the Bunia family.