The moving story behind the Brindisi memorial 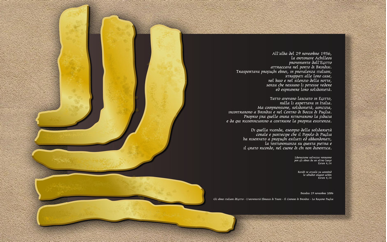 Tuesday 16 June is a red-letter day for the Jews of Italy - and especially those who came as refugees from Arab countries. On this day, the Foreign Affairs committee of the Italian Parliament will be conducting its first ever hearing on Jewish refugees*. It will be an occasion to recall the Egyptian-Jewish refugees who arrived in Brindisi in 1956, and the very special welcome they received from the people there. In 2006 a memorial or stele was erected on the site of the Brindisi refugee camp. Levana Zamir tells its story:

Carolina Delburgo, born in Egypt and today living in Bologna, Italy, is the initiator of the memorial, or stele of Brindisi. She was only nine in November 1956. Her father had been imprisoned by the Egyptian authorities together with thousands of other Jews. He was then expelled from Egypt with his family, leaving behind his whole life and assets.

Author of the book Come Ladri nella notte (Like Thieves in the Night), Delburgo tells the story of the mass expulsion of the Jews. She is the Italian representative of the International Association of Jews from Egypt, headed in Israel by Levana Zamir.

Many of the 35,000 Jews expelled from Egypt by President Nasser in 1956-57 were of Italian origin. The state of Israel not being able at that time to absorb overnight those thousands of refugees, many found shelter in Italy in the refugee camp of Brindisi, until they rebuilt their lives in Italy, where they and their descendants still live today.

Delburgo visited the refugee camp at Brindisi in 2006, searching for the exact date of her arrival in 1956. She was stirred by memories. But she also heard that the municipality of Brindisi intended to pull down the camp, and replace it with something else. Carolina Delburgo decided to fight and convince the municipality of Brindisi to keep the camp as a memorial to the Egyptian Jewish refugees, as well as to those citizens of Brindisi who helped absorb them.

And she succeeded. Here follows the moving inscription on the stele of Brindisi. It commemorates November 29, 2006, 50 years after the mass expulsion of Jews from Egypt, and the arrival in Brindisi of the ship Achylleos. One ship among hundreds of ships and airplanes, taking out of Egypt those thousands of expelled and fleeing Jews:

On the morning of the 29.11.1956 the ship Achylleos coming from Egypt anchored in the port of Brindisi. It transported Jewish Refugees, especially Italians, expelled from their homes in the darkness and silence of the night, when nobody could see them to express some solidarity.

They left everything in Egypt, and nothing was waiting for them in Italy. But they encountered comprehension, solidarity, friendship in Brindisi, and in the Center of Bocca di Puglia. It is between those very walls that they regained confidence and from here they began to reconstruct their own lives.

This story is an example of the solidarity and commitment that the citizens of Puglia reserved for the refugees, the abandoned and exiled. This is a testimony on stone, and a grateful memory in the heart of those who did not forget.

"Peace and Liberation for Jews will come from another place"

Brindisi 29 November 2006
The Italian Jews from Egypt, Municipality of Brindisi
The Jewish University of Trani , The Puglia Region
The Stele inauguration was attended by the Mayor of Brindisi, the Cultural Representative of the Region of Puglia, and Carolina Delburgo, representing the Italian Jews of Egypt.

Among other documents found by Delburgo in the Brindisi camp archives is a full list of the Egyptian-Jewish refugees. A very important document, even listing the foods distributed daily to the refugees, it is reproduced in Delburgo's book. One thing is for sure, the spoilt Egyptian Jews did not stay a minute longer than they had to in the camp, given the choice!

*The hearing takes place during the Justice for Jews from Arab Countries (JJAC) conference in Rome, 15 - 17 June.
Posted by bataween at Monday, June 01, 2009

Bataween, do you have a link to this article?

Dear Carolina, day after day you did conquer the right place for the
Egyptian Jews, many of them coming from Italy.
Now you have completed your hard work and a lot of people will continue
it with great success, always remembering and honouring your fundamental commitment.
Thank you,
Prof. Felice Zadra

NYC June,10 2009
Carolina Delburgo, are you the Caroline Delburgo who lived in Cairo at that time and went to the Lycee Francais de Bab El-Louk? We may know each other from there. Did you take the school bus to go to and return from school. Do you have perhaps a cousin that also took the bus? Did you live not far from Antik-khana and Maarouf, the cinima Rivoli and the tribunal mixte? If you are the one and you recognize youself you may contact me please.

Is it possible to see a copy of the list of refugees taken to italy on the AChilles. My father in law was on that boat.His name is Victor Saleh. Is it on the internet. Lauren James

MY DEAR CAROLINE,
53 YEARS LATER NOW, WE DID ESCAPE THE SAME WAY,AFTER A NIGHT OF A BLACK OUT,AT 3 OCLOCK IN THE MORNING THEY CAME TO ARREST US,AND LIKELY OUR NEXT DOOR NEIGHBOR TOLD THEM WE WERENOT HOME....SO IMMEDIATELY MY FATHER MADE ARRANGEMENT WITH TH HIAS,AND LEFT ALSO IN THE MIDDLE OF THE NIGHT FROM CAIRO TO ALEXANDRIA AND TOOK THE AEOLIA SHIP TO MARSEILLES AND TO PARIS,UNTIL WE GOT OUR VISA TO LOS ANGELES,CALIFORNIA.THANK YOU HIAS..BUT THE MEMORIES ARE STILL HERE..AND READING YOUR STORY,MADE ME GO BACK TO 1958 AND I AM VERY EMOTIONAL ABOUT IT...I REMEMBER ONE THING NOT TO FORGET, MY PARENTS DID LET ME TAKE MY KITTY
CAT MICHMICH
AND BOUGHT HER A TICKET,AND CAME WITH ME ON THE BOAT,AND MY BOYFRIEND WHICH LOVED ME SO MUCH SURPRISED ME AND CAME FOR ME ON THE BOAT..SURPRISES HAPPENED LATER,WHICH I HOPE ONE DAY TO WRITE A GREAT LIFE STORY,VERY INTERESTING FROM EGYPT TO AMERICA...I AM JUST WAITING FOR AN ENCOURAGMENT....THE COJAZOR IN PARIS WERE VERY GENEROUS WITH ALL THE REFUGEES FROM EGYPT,HELPED FEEDING US FOOD WISE AND MONETERY WISE...WE REALLY APPRECIATED THESE YEARS ALMOST WAITING 3 YEARS TO GET OUR VISA...NOW I HAVE 3 GREAT CHILDREN...9 GRAND CHILDREN AND I AM SINGLE !!!!AND LIVE IN BEVERLY HILLS,CALIFORNIA....AND STILL MISS
THE GOOD TIME WE HAD IN EGYPT BEFORE THE WAR WITH SO MANY FRIENDS,BIG UNITED FAMILY CELEBRATING ALL HOLIDAYS TOGETHER,
AND NOW EVERYBODY WENT ALL OVER THE WORLD...BUT AS WE ARE CELEBRATING PASSOVER NOW,JEWS HAS REPEATED HISTORY...ITS VERY FUNNY,WHEN MY GRANDCHILDREN LOOKS AT ME AS AN EGYPTIAN,ASKING ME IF I WALKED THE DESERT FOR 40 YEARS TO ESCAPE SLAVERY !!!!!HAPPY PASSOVER TO EVRYONE...I AM ERMOZA BONAVIDA FROM MISSION LAIQUE FRANCAISE IN CAIRO...SALAMAT....

I live in Egypt and have recently come across a folder from the office of architect Victor Del Burgo (Delburgo) from 1938. The folder contains an arch. draving, prospects and letters related to the building of a house for Mr. Sayd Khalil Bey Motawa in Zamalek. I don't know if that would be considered an heirloom and of interest to you. I would also be willing to search for other items relating to the Jews of Egypt.

I have passed on your information to Ms DelBurgo. Thanks