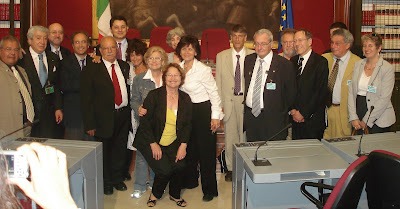 Justice for Jews from Arab Countries took its case to the Italian Parliament on Tuesday. At a hearing of the Foreign Affairs Committee, chaired by Fiamma Nirenstein, seven Italian deputies - a respectable turnout by all accounts - listened to presentations by Irwin Cotler, MP, ( pictured third from right) and Professor David Meghnagi*(fourth from left). Here is the JTA report:

ROME (JTA) -- There can be no lasting peace in the Middle East unless the claims of Jews displaced from Arab countries are redressed, Canada's former Justice Minister said.

The "exclusion and denial of rights and redress to Jewish refugees" from Arab and Muslim countries, Irwin Cotler told Italian lawmakers, "will prejudice authentic negotiations between the parties and undermine the justice and legitimacy of any agreement."

Cotler spoke Tuesday as part of a delegation of the Justice for Jews from Arab Countries organization, which presented its case to the Foreign Affairs Commission of Italy's Chamber of Deputies.

Some 850,000 Jews were driven out of Arab countries after the birth of Israel.
Cotler (pictured here with Levana Zamir, head of the Egyptian Jews' organisation in Israel), said a "revisionist Mideast narrative" continues to hold "that there was only one victim population, Palestinian refugees, and that Israel was responsible for the Palestinian Nakba [catastrophe] of 1948." This, he said, is "prejudicial to authentic reconciliation and peace between peoples as well as between states."

Cotler described "a double Nakba -- not only of Palestinian-Arab suffering and the creation of a Palestinian refugee problem, but also with the assault on Israel and on Jews in Arab countries, the creation thereby of a second, almost unknown, group of refugees, namely, Jewish refugees from Arab countries."

He urged Italy to "use its voice, vote and participation in matters relating to issues of Mideast refugees to ensure that any reference to Palestinian refugees will include a similarly explicit reference to Jewish refugees from Arab countries."

*Point of No Return adds: in his presentation at the Italian Parliament Professor David Meghnagi lamented the cannibalisation of Jewish identity and the misuse of language in relation to the Arab-Israeli conflict: "the words are ill - we must cure them", he said. The Palestinians used words like nakba or harsa to describe the catastrophe of their flight and defeat by Israel. In reality, though, the words described the genocide the Arabs had failed to inflict on Israel's Jews.

A survivor of the 1967 pogrom - the third to be directed against Libya's Jews - premeditated, with Jewish homes clearly marked out for attack - Professor Meghnagi appealed for Arabs and Jews to recognise their common humanity.

Coming from a musical family (his sister is the folk singer Miriam Meghnagi and his niece the opera singer Claire Meghnagi) Professor David Meghnagi, who teaches a Masters Degree course in Holocaust studies at Rome 3 University, is also collecting Jewish, Arabic and Christian music from Libya. At the close of the screening of The Forgotten Refugees for the Italian Jewish community on 16 June, he and Miriam sang a song the professor had composed himself, dedicated to the Jewish families butchered in the 1967 pogrom in Tripoli. They performed a second song in Arabic, originally sung by homeless Jews who sheltered in the main synagogue of Tripoli after the devastating 1945 pogrom. It expressed their yearning to go to Palestine. Tens of thousands of Libyan Jews fled as soon as they could when the state of Israel was declared in 1948.