Sir Martin Gilbert hears of the exodus from Egypt 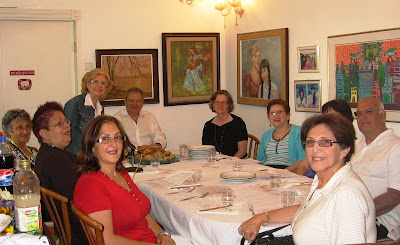 During a visit to Israel on May 17th, Sir Martin Gilbert met with a group of Jews from Egypt, who became refugees during the 50s and 60s of the last century.

Sir Martin, Winston Churchill's official biographer and a leading historian of the modern world, is working on his book about Jews in Arab Countries.

Levana Zamir, President of the International Association of Jews from Egypt, hosted the meeting at her home in Tel-Aviv. During two long sessions, Sir Gilbert heard and interviewed two groups about their personal exodus. Some were imprisoned and expelled during the first mass expulsion by King Farouk in 1948/1949. Others were part of the second mass expulsion by President Gamal Abdel Nasser in 1956/57: 35, 000 Jews of all nationalities were expelled overnight.

The third and most brutal period of arrest and expulsion of 1967-68 was represented too. It was the first time that Ovadia Yerushalmi, who was imprisoned in Abu-Zaabal and Turah jails from 1967 to 1970, had ever talked about the inhuman torture he endured, together with some hundreds of Jews, in those horrible prisons. Rosa Molkho, a survivor of one of the two pogroms in the Jewish Quarter of Cairo in September 1948, told the poignant story of how she had witnessed her mother's death.

Lucy Kalamaro and Sami Cohen from Cairo left 'of their own free will'. However, Sami Cohen insisted that the imprisonment of members of his family had prompted his own exodus before his turn came. "Our parents' generation" he said, "paid the heavy price of the Second Exodus."

The meeting was intense. These witnesses are the 'last of the Mohicans' who lived through the Second Exodus, which emptied Egypt of its Jews.

Ma sortie d'Egypte: Levana Zamir appeals to Egyptian Jews dispersed all over the world today to send their own stories, in any language, to her at levanazamir@gmail.com. Each story is important. Don't wait, do it now!
Posted by bataween at Friday, May 22, 2009