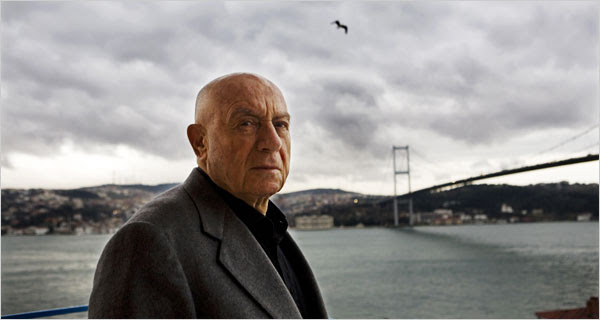 Fascinating article in The New York Times about democracy enthusiast Ishak Alaton, who built up a business empire in Turkey after his Jewish family was ruined by the anti-minority 1942 Wealth Tax. Alaton is confident that Turkey's democratic values are entrenched enough to resist Islamist pressures:

"Ishak Alaton, a prominent member of Turkey’s tiny Jewish community, has a secret to living more intensely: He built his house next to a cemetery.

“You remember every day that you’re going to end up there,” he said.

"Mr. Alaton is 81 and one of Turkey’s leading businessmen. He started with heating systems in the 1950s and expanded into construction, gyms and resorts. He has built roads in Kazakhstan, airports in Uzbekistan and a hospital in Moscow.

"But now he is applying his energies to improving Turkish society.

"He has become a kind of cheerleader for Turkish democracy, founding an irreverent policy research group, publicly applauding a newspaper that has become the gadfly of the powerful military and persuading Turkey’s low-profile Jewish community, largely closed, to become more openly engaged in society.

"Turkey, he argues, is growing a new skin, and he wants to be part of the process.

“It’s a fantastic change in the mental attitude of people,” he said, on his balcony overlooking the Bosporus on an unseasonably warm February afternoon. “Things are unraveling.”

"Mr. Alaton takes an almost childlike glee in watching that happen. The Turkish Republic has been good to him, he said. He started from zero and has built a multimillion-dollar empire, the Alarko Group, almost entirely without the obstruction of anti-Semitism.

“I never felt I was ostracized for being Jewish,” he said. “I’ve had a pleasant life and steady growth.”

"He cares deeply for his country and believes that a more confident society that is asking more questions will be better able to hold the state to account.

"Turkey is a vibrant democracy in a region where few others are. It has come a long way since the 1940s, when its economy was largely centralized and there was just one political party. But an influential state establishment still wields tremendous power, and the military is still involved in politics, steering the country from behind the scenes.

"Mr. Alaton developed his taste for democracy in Sweden, where he worked as a welder in the early 1950s. (...)

"When he returned to Turkey in 1954, he found a business partner and slowly began to build his company, selling heating systems in Istanbul. He tried to recreate Sweden in his own factories. Walls were painted cheerful colors, and a big cafeteria was built for the workers.

"In the 1960s, secret police officers, hunting Communists, came to Mr. Alaton’s plant, acting on a tip from an informant. What raised suspicions? The walls were painted red. (“They were salmon!” he said.) Further suspicions arose around his practice of eating with the workers. In the end, they made no arrests.

“They didn’t believe that a businessman was a Communist,” he said, laughing.

"His Jewishness did affect him, and in many ways was the reason that his beginnings were so humble. His father, a yarn importer, lost everything in 1942 when Turkey imposed the infamous Wealth Tax. While its stated aim was to fill state coffers during World War II, larger amounts were levied on non-Muslims, like Jews, Armenians and Greeks. It was widely seen as a racist attempt to diminish the economic power of minorities in Turkey.

"Many Jews had been in what is modern-day Turkey for longer than the ethnic groups of some of the officials enforcing such policies, having immigrated to the Ottoman Empire in the 15th century from Spain, where they had faced persecution.

"Burdened with the tax, the family lost their house, furniture and business. Mr. Alaton was 15 at the time, and remembers their being left with some mattresses and a few towels. Mr. Alaton’s father went to a labor camp in eastern Turkey to work off his remaining debt, and Mr. Alaton, as the oldest boy, was forced to drop out of school to support the family.

"He remembers the evening his father returned home from the camp, a bent, gray-haired man who, in the dimness of an apartment without power, he mistook for a beggar.

“I looked at my sister — we didn’t know who this man was,” he recalled.

"His father never recovered. He had met Mustafa Kemal Ataturk, Turkey’s founder, and strongly believed in the project of the modern republic. When the state betrayed him, he was unable to move on. Mr. Alaton, as a young man, criticized him for it, something he now regrets.

“I still have this weight on my conscience,” he said.

"It is tragedies like this that have caused the Jewish community, like other religious minorities in Turkey, to keep a low profile, staying out of politics and rarely speaking out. Mr. Alaton says he has tried to change that. “So we can prove we are useful to society,” he said.

"For example, when a rabbi was asked by a Turkish university to teach the Old Testament to Muslim theology students, community members balked, apparently worried that such exposure could bring harm. Mr. Alaton said it took him an entire year to persuade them to approve the request.

“What are you afraid of?” he said, exasperated.

"Eventually they did give their approval, and a chair was established at the Marmara University Theology Faculty.

"As for worries that the current government is going to bring hard-line Islamic rule to Turkey, Mr. Alaton does not share them.

“We are too open a society for that,” he said. “They are using this to create a new scarecrow. Our history has been full of scarecrows.”

"Turkey has been a democracy for years, and, unlike in Russia, which tried to erect the structures of democracy overnight after the Soviet Union’s collapse, cramming democracy down people’s throats in one painful gulp, the adjustment in Turkey has been much more gradual.

“We’ve been able to digest our democratic values,” he said. “You should be very hopeful.”

Read article in full
Posted by bataween at Sunday, February 15, 2009