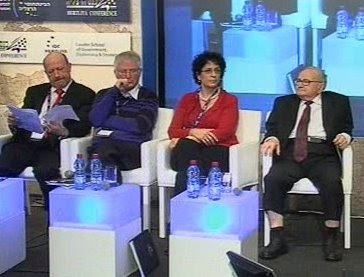 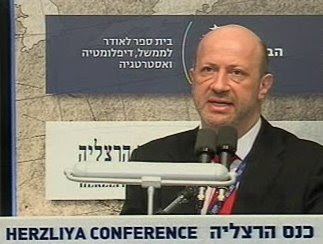 The 2009 Herzliya Conference, Israel's premier global policy conference, is now taking place and will be attended and watched by Jewish and political leaders around the world. For the first time this year, this prestigious conference will have a 90-minute session dedicated to the issue of Jewish refugees from Arab countries.

Among the speakers on the panel on Jewish refugees, taking place at the Ivcher Auditorium, will be Edwin Shuker (pictured), President of Justice for Jews from Arab Countries (JJAC); and Rachel Machtiger, Director of JJAC Israel (who is also a Senior Research Fellow at the Institute for Policy and Strategy; Atlantic Forum of Israel)

CLICK TO WATCH IN HEBREW*
(*Use the Internet Explorer browser )

August 2008: Meeting with Rafi Eitan, Minister of Senior Citizens who announced that the government would allocate NIS 10 million to the Jewish Agency, to set up a new agency that will be responsible for seeking redress for all lost Jewish property, including in Arab and Muslim countries.
August 2008: Meeting with Dahlia Itzik, Speaker of the Knesset, to brief her on this subject and to discuss a draft Knesset resolution on rights for Jewish refugees from Arab countries.
Oct.-Nov. 2008: Briefings and/or discussions with Members of Knesset, including: Bibi Netanyahu; Yitzhak Cohen, Michael Eitan, Moshe Kahalon, Ben Shoshan and others.
October 2008: JJAC assisted in promoting the screening of the film The Forgotten Refugees, a movie on the plight and flight of Jews from Arab countries, to overflow audiences at both the Tel Aviv and Jerusalem Cinematheques. The movie was followed by a Q&A session.
November 2008: JJAC Executive Vice-President, Stanley Urman, spoke at a Bar-Ilan University conference in Israel on Jewish refugees from Arab countries. At the conference Religious Affairs Minister, Yitzchak Cohen of the SHAS party, said that no peace with Arab countries should be concluded without compensation for Jewish refugees.
January 2009: A conference was held on Jewish property and heritage in Arab countries. During the conference, the Minister for Senior Citizens, Mr. Rafi Eytan, presented a draft resolution which was presented to the Israeli government. JJAC's Executive Vice-President, Stanley Urman was also on the program.
February 2009: JJAC's President, Edwin Shuker, speaks at the 2009 Herzliya Conference, Israel's premier global policy conference.
February 2009 (upcoming): Israel's national television channel, Channel One, will be showing the film, The Forgotten Refugees. This film will be broadcast to hundreds of thousands of viewers, in Israel and in surrounding countries, educating its viewers on the subject of Jewish refugees from Arab countries.